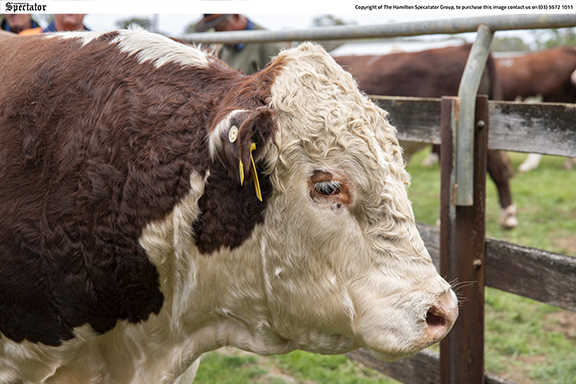 MAWARRA Genetics bull, ‘If Only Q264’ broke records at the Herefords Australia Wodonga National Sale on Wednesday, May 12.

It was the highest priced bull in the event’s history and sold to local buyer, David Lyons of Melville Park Herefords, Vasey for a whopping $103,000.
It blew the event’s previous record of $95,000 out of the water, which was made in 2016 by South Australian sire, Minlacowie Jubilant J123, sold to Devon Court Herefords.
The sale was also streamed online through AuctionsPlus so the crowd was left guessing about who the big spender was until Mr Lyons was revealed as the owner.
Mr Lyons had been looking into Mawarra the bull prior to the Wodonga National Sale and was drawn to the bull’s combination of phenotype and impressive data set, saying it could be hard to find a good bull with good figures to match.