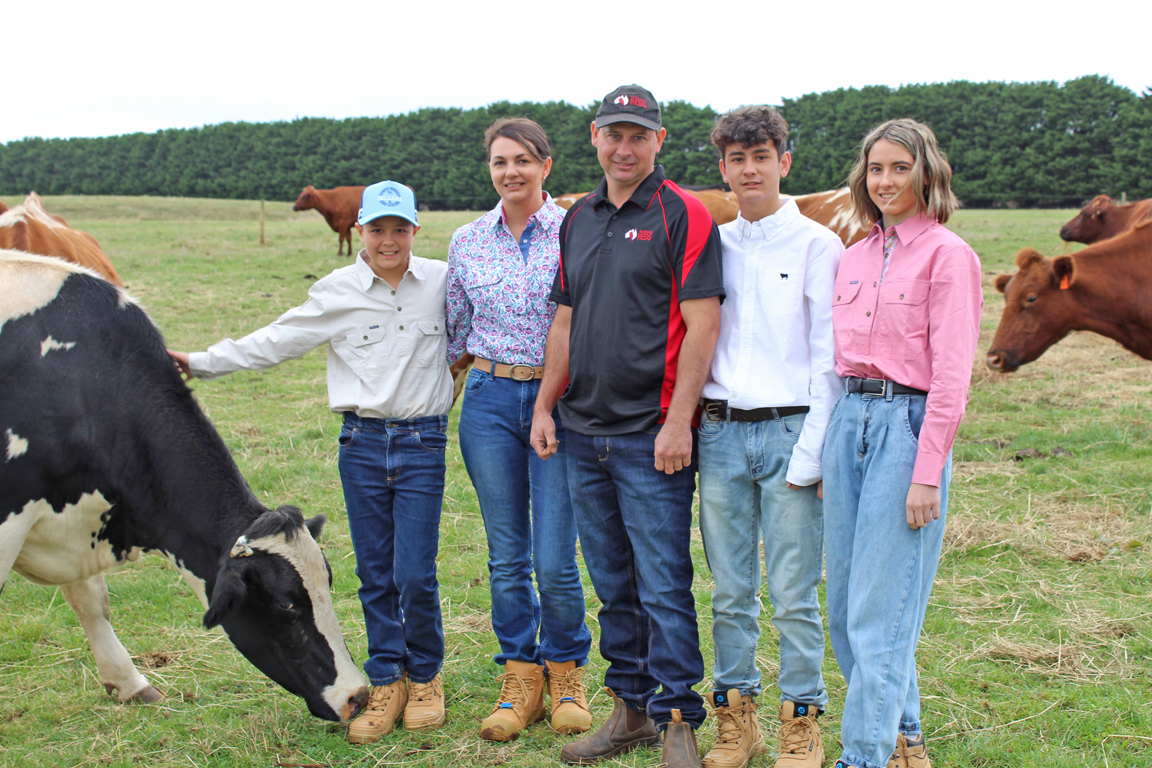 TERRY and Shannon Blasche together with their four children made the move 2000 kilometres south to farm near Jancourt in Western Victoria last September. Photo: MATT WOOD, WESTVIC DAIRY.
By Michelle Muir

Terry and Shannon, along with their four children, moved to Jancourt East in September 2020.
Packing up and moving almost 2000 kilometres with their herd of Aussie Red cattle was challenging enough but throw in a pandemic and the need to learn a very different farming system quickly, and the past eight months have been something of a whirlwind.
The family had been farming at Fairy Hill, near Casino in northern NSW.
It was there that Terry, a third-generation dairy farmer, and Shannon, a youth worker and counsellor, began purchasing the 87-hectare family farm in 2015.
This followed an earlier purchase of a 60-hectare outpaddock.
However, the inability to expand the business due to lack of available land, along with a desire to run a simpler business model which wasn’t reliant on irrigation, saw the couple considering its options.
Battling a two-and-a-half-year drought strengthened their desire to move, and after looking at several dairy regions throughout the country, they settled on south-west Victoria.
“We chose this area due to reasonable land prices, reliable seasons and the opportunity to grow our business,” Terry said.
“Back in NSW we were irrigating for eight to nine months of the year and calving year-round to produce a flat milk supply for the liquid market.
“There are pros and cons to all systems, but we decided we wanted to move to a dryland farm and a seasonal calving pattern.”
After purchasing the farm, the cows needed to make the long journey south.
Many of them were lactating at the time and after considering the options, it was decided to make the trip in one go.
The cows were on the truck for 24 hours in total, with drivers working shifts in order to keep moving.
All the cows walked off the trucks and after an initial spike in somatic cell count, up to around 400,000, it soon settled back down.
Yield also dropped off, and while that too bounced back it didn’t return to previous levels.
This is hardly surprising, as in addition to the journey the cows moved south in a cold wet spring, hardly sub-tropical weather.
They also had to adjust to a new dairy.
“We had a 16-a-side double herringbone on the old farm, here we have 40-stand rotary,” Shannon said.
“We had friends help push the cows onto the platform for the first few milkings but they soon adapted.
“The whole process has shown us just how resilient the cows are.”
With a new region, farm and farming system to learn, the Focus Farm project came along at a good time for Terry and Shannon.
“When we heard about this opportunity it seemed like perfect timing for us,” Terry said.
“Although I’ve farmed all my life, I know we have a lot to learn about farming down here.
We feel that the input and experience of local farmers and service providers on the Support Group will help us get up to speed more quickly, which in turn will allow us to get on with achieving our goals.
“One particular focus will be pasture management.
“Up north the farm was sown to tropical grasses, mainly setaria. These pastures were then over-sown with annual ryegrass every autumn.
“We have already started renovating paddocks here, with about 52 hectares of perennial ryegrass sown following summer crops so far.
“As well as the business side of things we are keen to meet more people in the area.
“We have been involved in Dairy Farm Monitor programs in the past and are happy to share our story with other farmers.”
There are currently 260 cows in the milking herd, with a number of heifers set to calve in spring, which will lift the total to around 300.
It is likely to remain at this level while the true carrying capacity of the 216 hectares is established.
All but a handful of the herd are Aussie Reds, with only a few Friesian crosses remaining.
The move over to the reds started around 15 years ago when the ‘Fairy Vale’ pedigree herd was established.
Terry and Shannon find the breed easy to manage, with minimal lameness and mastitis, along with good fertility and calving ease.
While still finding their feet on the new property, it is expected the cows will be fed around 1.8 tonnes of grain per year, and the rest of their feed requirements will be grown on-farm, minimising exposure to fodder markets.
Upgrades to infrastructure have already started, with ACRs added to the dairy as part of the plan to make it a single operator shed.
More investment in technology and further upgrades will become part of discussions throughout two-year Focus Farm project.
Other priorities include reducing debt; reducing cost of production; pasture renovation, including looking at drainage options; moving the herd from year-round to a single autumn calving pattern; looking to employ a staff member to reduce the workload of Sieghard - Terry’s father who also moved from Fairy Hill; and improvements to calf rearing facilities.
These goals will be discussed and finalised at the first Support Group meeting which will take place in mid-May.
This Support Group is made up of 20 local farmers and service providers that meet eight times a year to discuss what has happened, what is coming up and work through the various ways that Terry and Shannon’s goals can be achieved.
This project will be facilitated by business consultant Cath Jenkins, with the support of WestVic Dairy extension officer, Matt Wood.
Several Open Days will be held during the project to allow the region’s farmers to see firsthand how the business is progressing and learn from the decision-making processes that were followed.
The first of these days will take place in September this year.