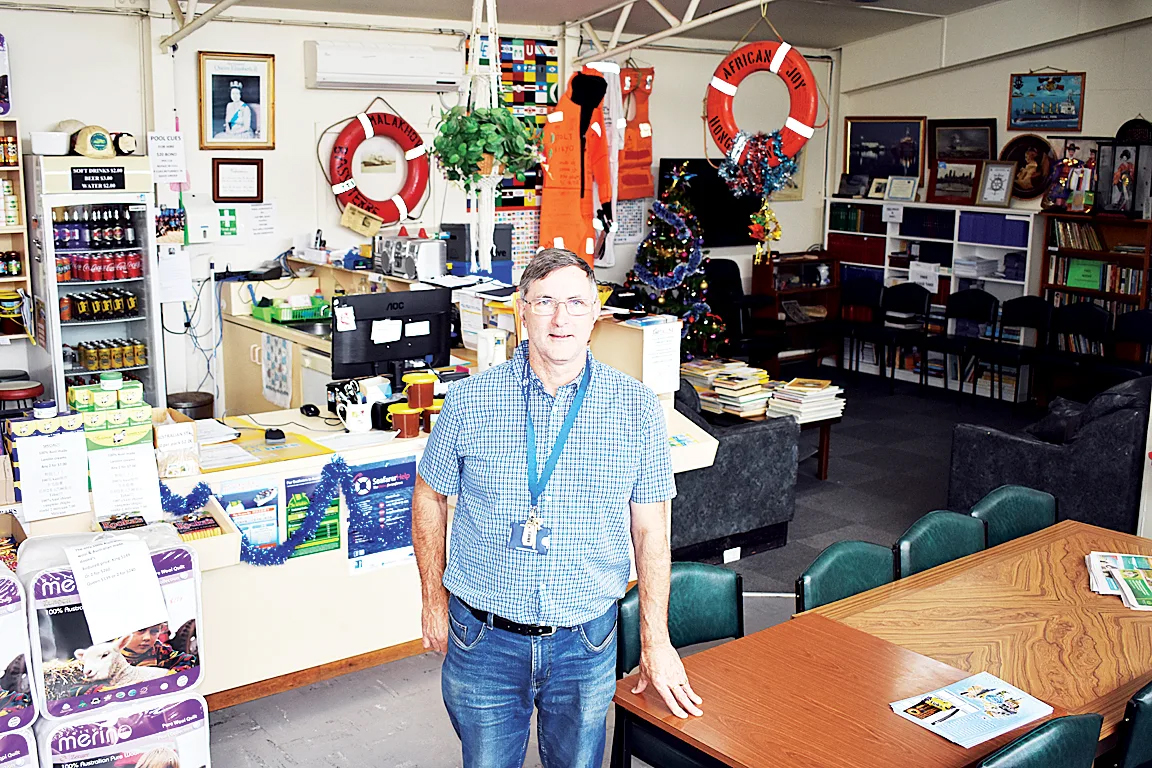 “MOST Australians need to understand how bloody lucky we are. (Seafarers) only do what they do to better their family’s life. If we can help a little bit in that respect, that’s what our job is.”

So says a man who should know.

Neville Manson has been involved with the Mission to Seafarers in Portland for 15 years and manages the charity’s work here helping foreign seafarers when they arrive in the city.

As does his band of about 25 volunteers, many of who have been also doing it a long time and enjoying carrying out the Mission’s mission, to help visiting seafarers in whatever way they can.

But as the story on the front page of this edition of the Observer shows, the number of seafarers has increased, and the Mission needs more volunteers to help out.

To many, the seafarers are men (and the occasional woman) who come out of Woolworths with their hands full of shopping bags on their way back to their ships.

But there’s more to it than that.

Mission to Seafarers itself is a church-based organisation that offers practical help for seafarers in 27 locations around Australia (plus a few more by phone) and more than 230 worldwide.

It’s also known as the Flying Angel Club in parts of the world, thanks to its Biblical-inspired logo.

It has been in Portland for more than 50 years, and based inside the Port of Portland since 2006, previously overlooking the port on Cliff St.

“Mission to Seafarers is an Anglican organisation but in communities like Portland which is small the Anglican Church isn’t in a position to fully fund or run seafarers centres so we look for support among all the churches and anywhere else we can get it,” Mr Manson said.

“We have a really, really good relationship with the Port of Portland, they need us as much as we need them.

“They provide the building and lots of in-kind support. We’re happy down here and see four times as many seafarers now as what we used to see outside.

“With the changes in WorkCover in a busy working port, they require us to do the transport for seafarers – they’re no longer able to walk anywhere in the port as a safety measure, and that’s why we do the bus run.”

The Mission’s mini buses are a familiar sight around the streets of Portland and sometimes further afield.

Volunteers do the run on the hour, firstly around the ships to see if anyone needs to come to the Mission site or go into the city, then around the Portland CBD – the bus stop on Henty St is the drop-off and pick-up point where seafarers can be assured they’ll get a ride back to their ship.

“We used to take them out to Bridgewater to spend a whole day but that rarely happens now,” Mr Manson said.

“They’re usually out about two hours. Ships come in at 12.01am to maximise port fees and they start working straight away. At any time, half the crew are working.”

For Lisa Bartoselli, joining up as a volunteer about three years ago was an easy decision.

She had just shifted here from Wollongong, south of Sydney, and saw an advertisement on social media.

“I’ve been doing it ever since, three shifts a week (Tuesday, Wednesday and Sunday night) and any other time they need someone,” she said.

“There are a lot of good people around to give up their time and dedication to help – I’m 55 and doing this but there are some in their 70s.”

Ms Bartoselli’s shifts include manning the shop and driving the mini bus.

“If they’ve got time, I sometimes take them to the fauna park, show them a kangaroo, they get very excited and get on Facebook to show their families.

“They love the simplest things. I’ll show them the footy field (Hanlon Park) and the botanical gardens and if they want to go somewhere else, we’ll always help them.

“They’re so appreciative of any help you give them.

“I think they’re just amazing people. They keep all our countries going and to be away from your family for up to nine months and to be on a ship with the same people for such a long time can’t be easy.

“One man (aged in his 30s) hadn’t been home for seven Christmases, some don’t even get to meet their babies until they’re six months old, and they only see their families on FaceTime.”

Language is rarely a barrier either – the seafarers are largely Filipino or Chinese, but there are also Indians, Indonesian, Turks, Russians and Ukrainians.

“It’s very common with the Chinese to have (Google) Translate on their phones and if they don’t speak English and you need to communicate with them, we can.

“But most of the time there’s at least one person in the group that can speak English.”

There have also been more women among the ranks in recent times.

While the seafarers contribute plenty to the local economy – $1 million in the last financial year is Mr Manson’s estimate – they patronise the Mission shop as well.

“Companies say to them they want you to use the Missions and if you want them to be here you need to support them,” Ms Bartoselli said.

“We can’t survive without them and they’ll always try and buy something.”

But the Mission building isn’t just a shop – it also has a chapel where seafarers can get away for some quiet time and reflection if they so desire.

So what’s needed to become a volunteer?

“We have all sorts of volunteers,” Mr Manson said.

“Probably only a small proportion are church-related, they’re all just people keen to help.

“A shift down here is probably two to three hours, that’s the minimum commitment, some do a lot more.

“A lot of them just do their three hours a week.

“We are registered with Centrelink as a provider for those on a pension and who have to do five hours voluntary work.

“You don’t need a special licence to drive the bus, it’s all automatic and under the 12-seat capacity.”

Age is no barrier, and as Ms Bartoselli showed above, language is fast disappearing as one as well.

“Most seafarers undertake four years training to be a seafarer and most of that is in English as well,” Mr Manson said.

“I always say to the volunteers to smile – that means everything.

“The logo is so identified around the world they know they’re going somewhere where they can get help, and it’s very well respected.”