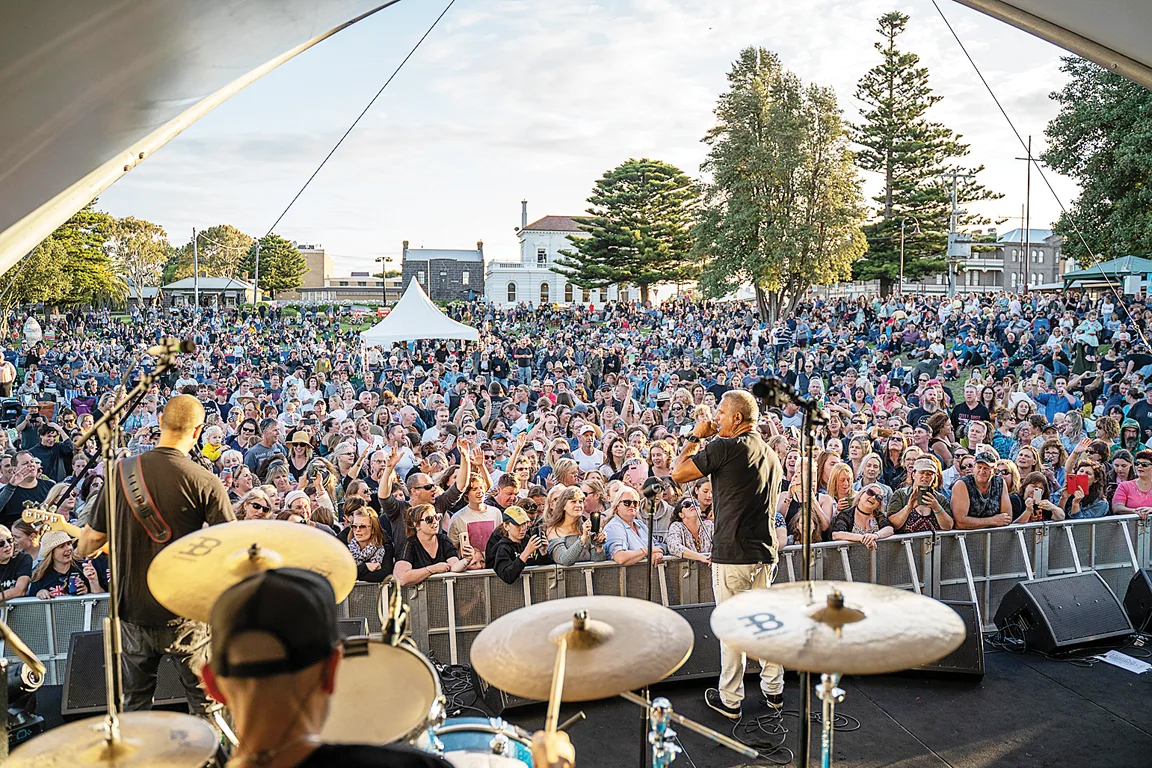 THOUSANDS of people visited the weekend’s Hooked on Portland festival, with attendees, volunteers and businesses alike delighted at the event’s atmosphere, popularity and success.

Warrnambool mother Dale Beane travelled to the city with her family for Saturday and said Jon Stevens’ performance “was sensational.”

“The other bands were really good, too. Well done, (we) will be back,” Ms Beane said, noting that it was her first visit to a Portland festival.

“We came to see Jon Stevens primarily, but were impressed with the amount of family-friendly things to do also.”

The city’s foreshore was also busy from Saturday morning as anglers set off to score the heaviest catch in the festival competition, and lawns from Julia St to the Portland skate park filled with people seeking something special from the markets, a wombat pat, a kick-back to live music or a try at fishing from the floating berth at the Portland Trawler Wharf.

Portland Harbour Tours’ John Elleway offered a slightly shorter boat-based ride past the city’s features including the Port of Portland, and said about 80 people took advantage of the special chance.

He estimated there were more people in Portland for the day than the city’s Upwelling Festival, with some ideal weather assisting that.

His family’s seafood business, Arrow Fisheries, also had, “an exceptionally good day at the Bonney Bar serving up squid tacos and Thai squid balls,” he said.

The licenced pop-up bar operated from a fenced-in marquee near the foreshore playgrounds, and also featured food from other local operators including Yumbah Aquaculture’s abalone and restaurant Clock By the Bay.

Clock By the Bay chef and owner Matthew Lipscombe said they had a terrific day at the pop-up bar and congratulated Glenelg Shire Council for putting on such a wonderful festival.

“It was great to see so many people out enjoying the new set up.”

They also felt treated when Jon Stevens and his band and crew chose to dine at their Cliff St restaurant following their performance.

“It was a pleasure to be involved with the festival,” Mr Lipscombe added.

“Full credit to the organising staff and committee for Hooked on Portland: it was a great event for the Portland township and communities.

“We had heaps of first-time visitors and it was probably one of the best free community events you will see anywhere outside of a major city.”

Community groups were also a firm part of the weekend, with the Portland Lions Club and Sport Fishing Club assisting with the fishing competition and both Rotary Clubs featuring at the festival as well as Australia Day gatherings.

All the commentary she had heard from people about the festival “was amazing,” and while she regretted that she was unable to attend the live music performance on Saturday night, “I’ve never seen photos like that since way back in the day when we had country music festivals here, and that was a long time ago.”

Jon Stevens also donated $500 to the Rotary fire effort for East Gippsland too, she added.

Glenelg Shire Mayor Anita Rank said she was pleased to see the festival was a hit with a wide range of people across the weekend.

“It really catered for families and was great to see the community came out in support of the event.

“It was also of a high enough calibre to attract people from all around: I think that’s the most pleasing thing.

“When we host things, everybody does benefit,” she added, noting that numerous accommodation-providers and established eateries had been busy.

“We can’t do this on our own - without the support of the state government – so it was good that (fishing and boating) Minister Jaala Pulford was here seeing first-hand their return on investment.

“We do look forward to that continued partnership.”

* Denise Pekin from Portland Tourist Park on Garden St said their full range accommodation was booked out, and “everyone that went to that festival raved about it, how great it was.”

There were more families and older people staying for the Australia Day weekend than last year, she noted, and “everyone was happy and wanting a chat, so that was good.”

Guests included people from Hamilton, Casterton and Mount Gambier as well as those from further afield.

She said this weekend will also be busy due to basketball and fishing events in the city, however they are not fully booked out yet.