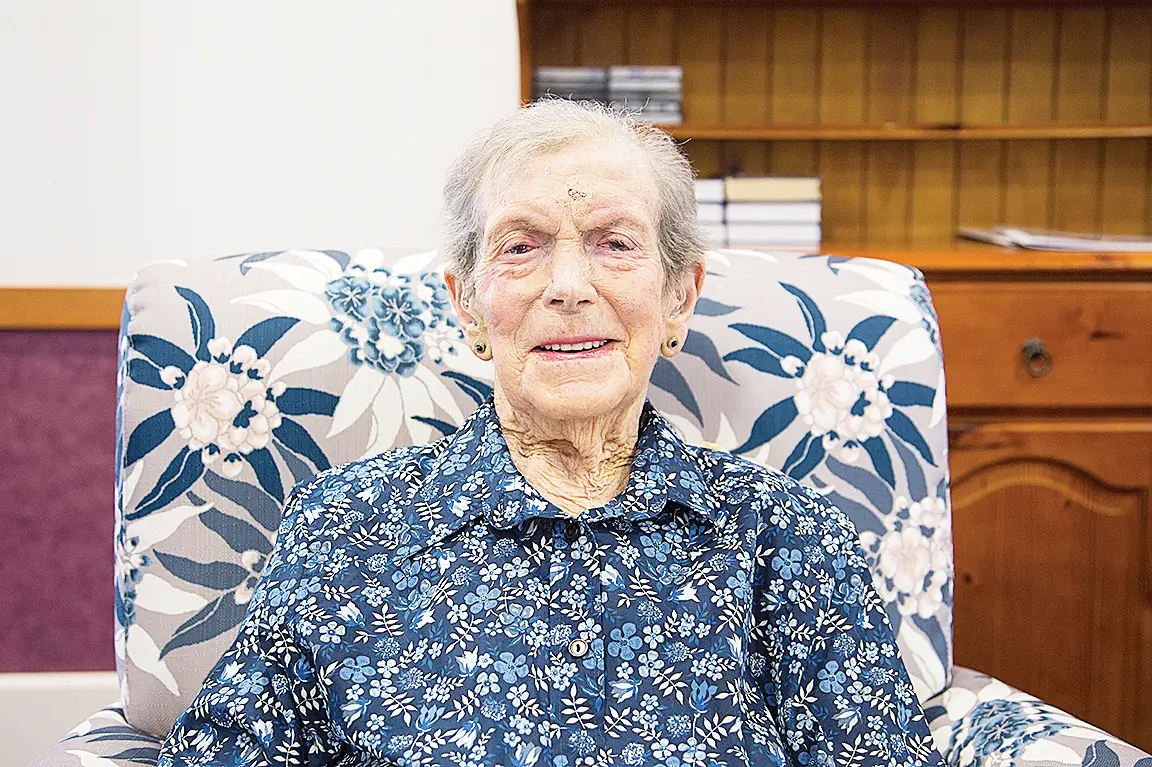 WHEN 25 makes a century… Anne Crooks turned 100 on Saturday but being born on Leap Day means she hasn’t celebrated her birthday that often. Picture: LEESA COOK 200227kh01-03
By Chalpat Sonti

ANNE Crooks might have just become Glenelg Shire’s newest centenarian, but she’s shares something in common with those one-quarter her age.

While Mrs Crooks turned 100, being born on February 29 meant it was only the 25th time she’d celebrated her birthday.

About 25 family members and a dozen other friends from as far afield as Sydney were on hand at Bupa Portland, which has been her home for the past eight years.

Mrs Crooks is used to the occasional birthday celebration – when she turned 84, her family threw her a 21st party, complete with the traditional key.

“I can remember right back to a kid and it didn’t feel too good then,” she said of getting to blow out the candles every four years.

“I don’t worry about it too much now.”

There are other things to concern herself with. The Crooks family has two passions – football (Carlton to be precise) and the Australian Labor Party.

With both a bit on the nose (the latter federally more so than at state level), there have still been many great memories for Mrs Crooks to look back on.

The once-mighty Blues have won two premierships in leap years as well – the drought-breaker in 1968 against the arch-enemy Essendon, and the memorable record high-scoring flag against Richmond four years later.

That 1972 grand final rates as Mrs Crooks’ most memorable moment in her 80 years as a Carlton supporter (it was a pretty good year for the ALP as well, with Gough Whitlam sweeping to power) being present at the MCG.

Her favourite player comes from a later vintage, Anthony Koutoufides, whom she named a pet spaniel after.

She’s as hopeful of all long-suffering Carlton fans that the glory days will return.

Mrs Crooks doesn’t have any secret to her long life, but it could be genetic. Her mother lived to the age of 96 and other women in the family have also had long lives.

She was born in Camperdown in 1920, leaving school at 14 to help support her family during the Depression years.

She married Bob Crooks in 1945 – her husband came from Carisbrook and lived next to the Nicholls family, Carlton royalty.

The couple moved to Rocklands during the construction of the Rocklands dam, part of an instant community that sprang up on the site.

Mrs Crooks said the galvanised-iron settlement was one of the best times of her life because it embodied all the qualities of a great local community.

They then moved to Heywood and a modest three-bedroom home in Edgar St, which Mr Crooks began to enlarge, and in which established an extensive vegetable garden and orchard.

It was the family home for 60 years and where the couple raised their four children, Julie, Michael, Mary and Roberta.

Mrs Crooks was the rock of the family and has delighted in her seven grandchildren and three great-grandchildren.

Life in Heywood revolved around home and the children, friends, politics, football, sport, St Gregory’s Church and the town itself.

Then there was life in Portland as well, where among other things Mr and Mrs Crooks enjoyed fishing.

Their 23-foot boat, the Why Worry, was designed and built by Mr Crooks and son Mike, with the support of Anne and other family members.

Mrs Crooks liked nothing better than getting out in the Why Worry, fishing off Portland. She and her husband spent many Fridays out all day on Portland Bay, bringing in a fresh catch of whiting, snapper and flathead which was always shared between family and friends.

But the Blues ruled supreme.

It was not uncommon for the family to get up early on a Saturday and drive for hours to Princes Park to watch their beloved side.

They would meet with Melbourne friends Norm and Kevin Larsen to watch two games of football before returning home to Heywood that night – a round trip of 700km in a long day.

Mrs Crooks also managed the local shoe store on Edgar St, which she thoroughly enjoyed, and also worked at the local TAB for many years.

At the age of 92, nine years after her husband passed away, Mrs Crooks moved to Bupa.

She still maintains her interest in family, politics and sport as well as the people around her at Bupa. While Mrs Crooks might not be sure there is any secret, her family is – “Anne’s 100 years is a story of resilience, hard work, care and devotion to family and a keen interest in the world around her,” they said.