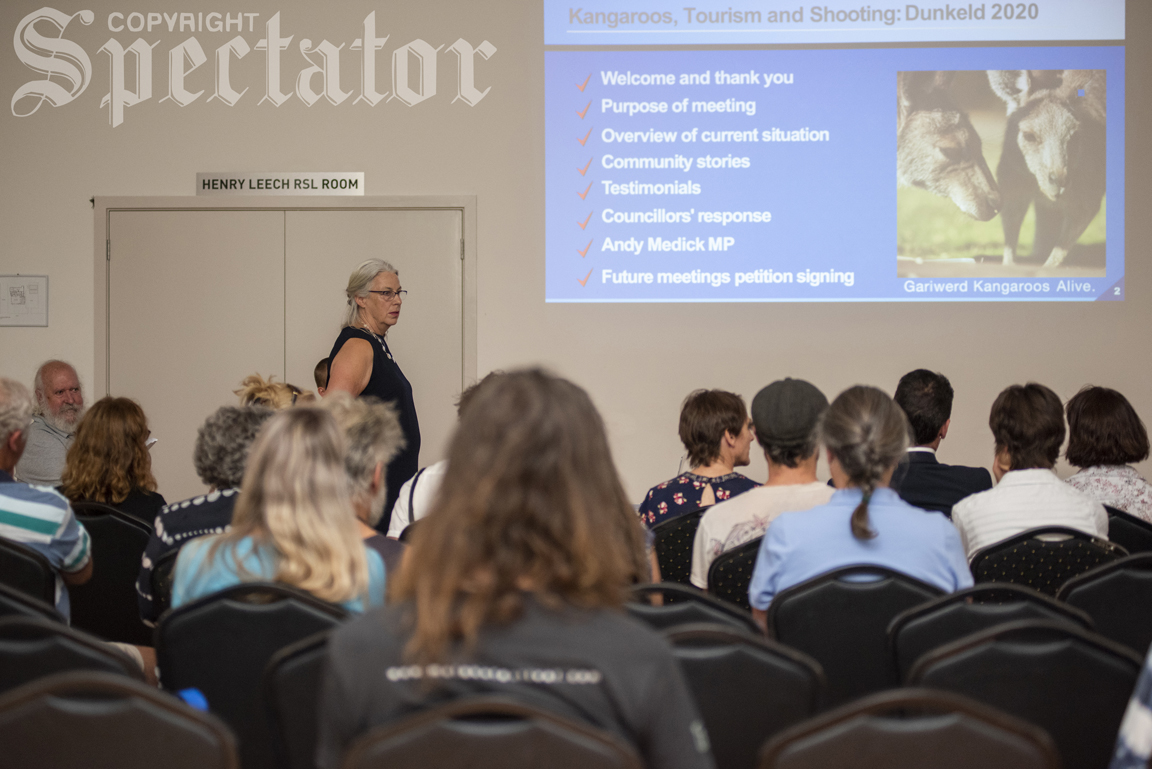 A COMMUNITY meeting regarding kangaroo shootings in Dunkeld is addressed by organiser, Jane Gibb, describing to residents about how kangaroo shooting has affected her. Photo: LAUREN HAY. 200312lh012
By Allanah Sciberras

DISTRESSED Dunkeld residents gathered at a meeting on Thursday after dozens of kangaroos were found around town, killed and disembowelled.

The meeting, held for locals opposed to kangaroo shooting, saw residents share that they no longer felt safe in the area.

After moving to Dunkeld nine months ago, local Samantha Sharp said she is ready to leave.

“I came here to retire and get a work-life balance, so this experience has been horrifying to me and my family.

“I don’t believe it should be happening at the bottom of a national park, it isn’t right.”

Ms Sharp said she moved to the area for a lifestyle change and didn’t expect to deal with kangaroo shootings.

“I came to Dunkeld and fell in love with the view ... I brought a five-acre property which I intended to renovate and turn into a B&B,” she said.

“I hear shooting in the early hours of the morning for hours, I had never heard a gunshot in my life,” she said.

“When it first happened, it was quiet distressing for me.”

Ms Sharps spoke about fear for her personal safety and the safety of her animals.

“This is happening on my boundary fence, so I am worried for my own animals,” she said.

“It happens on a weekly and fortnightly basis, and it can be happening for hours.

“It is affecting my business; I have had guests stay for two nights and just walk out because they don’t won’t to be woken by that.

“Aren’t we meant to be the gateway to the Grampians? It’s beyond me why we have all this shooting at the bottom of the national park.”

Ms Sharp said she has noticed a decrease in kangaroo numbers in the short time she has lived in Dunkeld.

“When I first moved here, I had 20 great big kangaroos dawn to dusk out the back and not one now,” she said.

“But I do get the injured kangaroos; I get the baby ones, I get the severely injured ones because they are not clean headshots and I have to take them into wildlife shelters on the way to work, it’s distressing.”

Ms Rainsford apologised to Ms Sharp for feeling the need to leave the area.

“I am sorry that I wasn’t fully aware of this issue, we need a community solution,” Cr Rainsford said.

“This has been going on for years, I am very pleased there is more interest and that is because of the group’s activity.”

“This is a major priority for us, and this is a big issue; I am very distressed about this conflict.”

Attendees spoke about the impact shooting has on tourism and the need to implement an exclusion zone.

“I care for kangaroos in the area and I have seen the aftermath of the shootings … these kangaroos are meant to be headshot, but they are not, they are body shot and most of the time people don’t bother to use another bullet to kill them, so they die a slow death” she said.

“Tourists and locals have called me to say they have found joeys hopping beside their dead mums, there are so many little ones that get left that starve and die.”

“I am happy to approach the minister and take it straight to MP Lily D’ambrosio and have it investigated and see what can be done,” he said.

“I like the idea of an exclusion zone but not sure who it will fall into, it might be the state’s responsibility.

“It may well be that an exclusion zone might have to be requested by local government, it’s something I have not heard of before but it’s worth investigating.”

Mr Meddick invited locals to put together a synopsis of case studies to be presented by him to the relevant minister.

“Put together a synopsis of what locals know so it all comes under a single synopsis that will be extremely helpful and not leave anything out … the more detailed the better.”

Mr Meddick said society needs to adapt and accept a change in attitudes towards kangaroo shootings.

“There has to be an acceptance that we need to change our attitudes, the traditional farming community will have to adapt and change.

“What is certain is that the type of cruelty that we have been hearing about is nothing new (and) it has to change, and it can only change through legislation.”

This was the first of four community meetings to be held in Dunkeld over kangaroo shootings.

The next meeting will be on May 1, airing a kangaroo documentary.

Spotlight on roads
6 hours ago 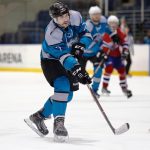 Change of pace
6 hours ago