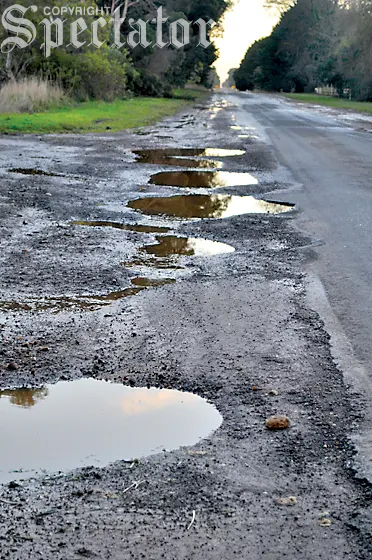 THE Woolsthorpe-Heywood Road has been a talking point for many years, with politicians supporting locals’ call for funding. Photo: SUPPLIED.
By Allanah Sciberras

THE Woolsthorpe-Heywood Road has once again come under scrutiny as locals take to social media to display their outrage over the road’s lack of upgrades.

Mr Whitehouse said the pothole riddled road had been deteriorating for years.

“I have been poking around this area for 40 years and I have spent lots of time in the area traveling that road,” he said.

“I still use that road on a regular basis and for as long as I have known it has always been a problem and this is not the first time that I have tried to something about it.

“I decided enough was enough after I was driving on it during the first week of December and I was stunned at how bad it was.

“I was out there last weekend and I was again shocked so I just thought stuff this, I’m going to dashcam record it and see what I could do.”

Currently, traffic volumes on Woolsthorpe-Heywood Rd average around 300 vehicles per day, with heavy vehicles accounting for around 15-20 per cent.

Mr Whitehouse said he had seen a notable traffic change over the years on the road.

“It has always been a challenging road and I have seen over the years traffic change,” he said.

“Forty years ago it was local traffic and the odd truck, but now you see lots of B-Doubles and they are a lot heavier and place strain on the road.

“The road gets busy over the long weekends and Christmas holiday breaks.”

Mr Whitehouse said the road was a major truck route from Melbourne to the Port of Portland, yet it remained a single lane majority of the way.

“The road has a single lane of asphalt, so if any vehicle is coming towards you, both vehicles need two wheels off the asphalt and that’s ok if you can do so safely, however there are many potholes to avoid,” he said.

“There is always a risk involved in doing this on a single lane road, you have to watch the edges. You always have the risk but this road it is just mindboggling to me why it is in such bad condition, I don’t understand.”

Mr Whitehouse said a long-term plan was needed to fix the road.

“These roads have been deteriorating for years and years and the road certainly needs big bucks to fix it.”

Mr Koliba also said long-term upgrades for the narrow sections of the road and upgrades would be considered in future funding.

Although the signs remain in place, Mr Whitehouse believed RRV had a duty of care to Victorian road users.

“Roads fail, I understand that and yes you can put a temporary sign, up but for how many years does a temporary fix work?” he said.

“This is not the only road around here that has these issues, but this is the worst and the solution to put 60km/h signs up is not a long-term fix.

“They would be negligent if there was an accident, it’s a real safety concern.

“Safety is always our first priority. Our maintenance crews undertake regular safety inspections across our entire road network and roll out improvements as needed,” she said.

“We have completed around $1.2 million worth of improvement works on Woolsthorpe-Heywood Road in the past two years, including resurfacing and road shoulder repairs, and will continue to monitor the road.”

South West Coast MP, Roma Britnell said she had been working to get recognition for this road since elected to parliament.

“It is beyond my belief that the road can be a B-Double route and still be a single lane road in many parts and the degree of potholes and its deteriorating state it is in, it is a real concern,” she said.

“It is hard to understand that government fixed 5km of that road in 2018 and left the rest untouched.”

Ms Britnell said there was accountability or understanding problems from RRV.

“There is no monitoring, no planning and for the roads that do get fixed, they fall apart again,” she said.

“It is an issue for the safety of the drivers, they are frightened to go on the road, and it is ridiculous that school busses still travel on it.

“I have travelled that route frequently and it’s one of the roads that I’m really familiar with, people refuse to use it, including truck drivers.

“To think that parents have to put their children on a school bus and for it to go on the road is unimaginable.”

There are currently no immediate plans to restore the remainder of Woolsthorpe-Heywood Rd.