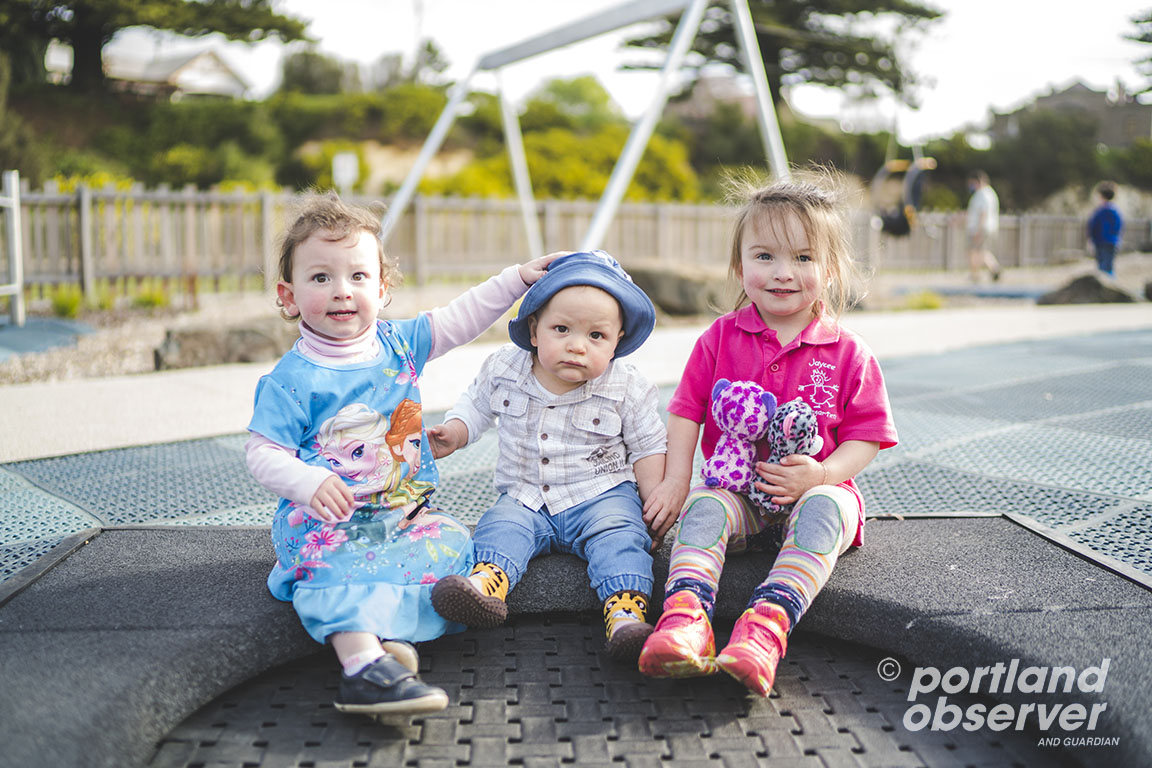 THE partial lifting of the coronavirus pandemic restrictions is good news for many in the community and among the first to take advantage were some of our youngest residents. Among them were Lola Hughes, 2, Archer Dawson, 10 months, and Kaisa Hughes, 4, who were able to use the foreshore playground again. Pictures: MICHAEL PETERS 200914mp03
By Chalpat Sonti

LOCAL tourism and hospitality providers are celebrating being able to finally reopen again, but uncertainty still remains as the coronavirus pandemic restrictions ease.

Regional Victoria moved on to step three of the “roadmap” yesterday, which meant a host of activities that had been restricted since early August were able to be undertaken to some greater degree again.

Hospitality providers were able to offer table service again, all retail, real estate and beauty salons could re-open, regional Victorians are able to travel freely around the rest of the state (excluding Melbourne and the Mornington Peninsula), up to 20 people will be allowed at funerals and 10 at weddings and 10 people can meet outdoors for a religious ceremony.

Primary school students will also return to school in the first week of term four, about one week earlier than usual (see story on Page 3), and there are also many changes relating to sport and recreation (story on Page 23).

Playgrounds reopened on Monday and the Portland outdoor swimming pool on Wednesday (story on Page 3).

But the relaxation of restrictions has been most welcomed by the hard-hit hospitality and tourism industries – though it is not quite all systems go yet.

Richmond Henty and Mac’s Hotel general manager Mark McIntyre said the next step in the easing was likely to be more useful for the industry.

At present there were still several restrictions – a maximum of 10 people per room, just two rooms per venue and up to 50 people seated outside, with maximum stays of two hours and a density rule of one person for every two square metres.

That meant at the Richmond Henty the bistro could not be reopened yet, and even as Portland’s largest hotel complex it couldn’t quite take full advantage of the maximum numbers – being able to cater for 66 out of a possible 70 at a time.

The next stage – with 50 patrons allowed inside and no real restrictions outside – would allow most of the group’s 66 staff to resume full duties.

“Hopefully that’s not too far away,” Mr McIntyre said.

“But you never know what you’re going to get. We’re just doing what we’re told to do in the parameters we’re allowed to work in.

“It’s just holding on and waiting for whatever comes next.

“If we go backwards again it’s curtains for business as we know it in lots of places. JobKeeper has been good for wages but everything else (costs) is relentless and you run out of dollars sooner or later.

“Hopefully this (easing) will stem the haemorrhaging.”

The group is also a major accommodation provider and there had been positive news on that front, with a spike in the number of recent bookings.

“It will be a slow build,” Mr McIntyre said.

“We’re very dependent on the dollars that come from out of Portland and that really won’t get back to normal until Melbourne opens up, or the South Australians start coming over to some extent.”

There are 239 postcodes in the greater Melbourne area, including Casey, the Yarra Ranges and the Mornington Peninsula, that are still bound by the restrictions.

His own business at Cape Bridgewater had received “a heap” of inquiries in recent days – one in particular stood out from a stressed family.

“The poor woman started crying when we said we would love to have them here – they’ve just had enough and wanted to go somewhere,” he said.

“That was pretty special, people are dying to get out.”

He had also taken calls from Melburnians looking to book later in the year if restrictions eased further.

“It’s all subject to numbers and social distancing and having a COVID plan but it’s an awareness thing as well – it makes you aware what to do id something does happen.”

There would be $5000 to bring those facilities up to date with more for accommodation venues.

“There’s a lot of announcing before anyone has any details,” he said.