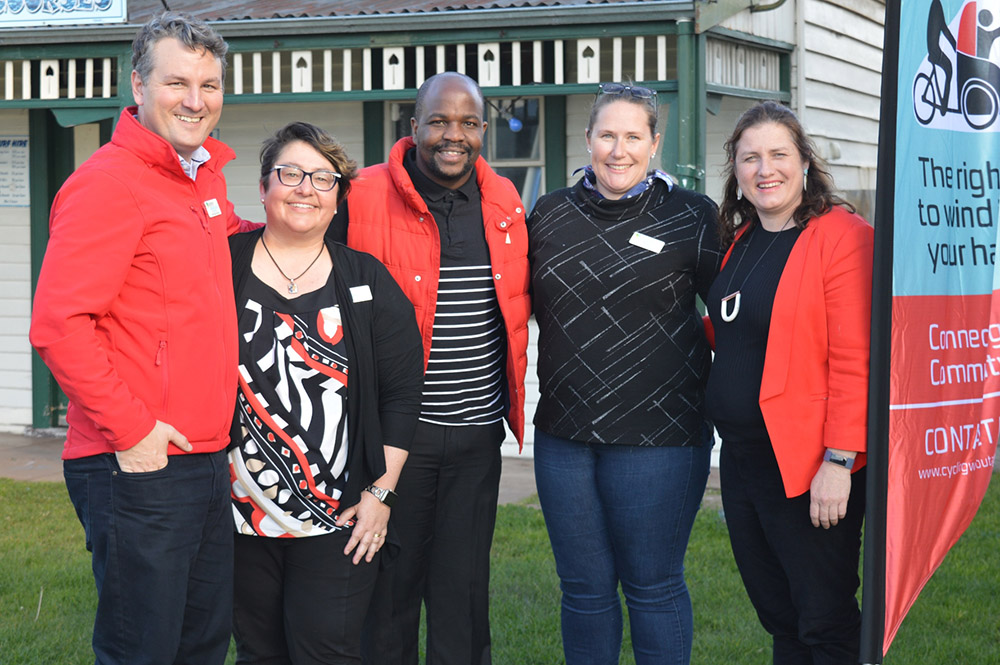 NIKKI Edwards never thought she would have the courage to take on a management position or lead a board of directors.

But the Portland woman has managed to do both of those things since graduating from the Leadership Great South Coast (LGSC) program last year.

She was one of several participants who joined the part-time program while also doing her day job in 2019.

A new cohort is currently part-way through their LGSC program and aspiring leaders are now being invited to apply to join the 2021 group.

Leadership Great South Coast aims to help develop the region’s emerging leaders and also empower them to establish projects that will create an ongoing benefit to the community.

The program achieved all that and more for Ms Edwards, who said she needed a personal and professional challenge and was “ready to grow” when she decided to apply to join the February to December program.

Ms Edwards had been working as a podiatrist for 30 years, including time operating her own podiatry business, and had volunteered in schools and with the Portland Hockey Club when her children started to get older.

She had heard about LGSC through friends who did it as well as the Committee for Portland, and thought it could be the right thing for her, too.

Her LGSC application in, Ms Edwards was interviewed, believed she hadn’t done a great job with the chat but was nevertheless successful.

She felt grateful to secure a scholarship from the South West Community Foundation, which meant she didn’t have to pay for the program herself.

Her business experience held her in good stead for her growing interest in taking on leadership or management roles, but she realised through the process that she didn’t have enough belief in herself.

“It was intense as an academic process, but also intense in the way that it challenged your own thinking about yourself: it was very thought-provoking.

“My highlight was probably meeting with Alma Besserdin: she came and spoke to us about ethnic and religious diversity and diversity in beliefs and thinking as well,” Ms Edwards said.

Ms Besserdin had been presented with the biographies of participants before the day, and recalled the names of and information about each attendee as they walked in.

Her charisma and the information she imparted stayed with Ms Edwards.

“She took the time to get to know us before she met us, and was totally invested in our journeys; her talk also opened my eyes to many things, and she even (then) came down from Melbourne for our graduations.”

Also on the day she met Ms Besserdin for the first time, previous LGSC participant Carly Jordan spoke about the Great South Coast Economic Migration Project, which has allowed migrants originally from Africa to relocate from metropolitan Australia to south-west Victoria in a bit to create a new life for their families.

One migrant spoke about his personal experience of arriving in Hamilton to live, which was “wonderful,” she added.

“That whole day was fabulous.”

LGSC also provided outlines for four potential community projects and the participants joined a project team each, with Ms Edwards taking on the development of Cycling Without Age Port Fairy.

Cycling Without Age is an internationally-established organisation that trains volunteers to ride trishaws around local communities transporting senior community members and people with disabilities to places they may not visit very often such as their old home, school or a popular scenic destination.

The trishaw concept also gives people a cycling-like experience which they may never have experienced, or not had the opportunity to do for a long time, including, feeling the fresh wind in their hair.

It is also recognised as a great way to establish personal connections between people who may not meet otherwise.

“Early on the piece we had spent a day learning about project management,” Ms Edwards said.

“We had five people on our team from all across the region; that obviously put up challenges geographically.

“We were diverse in our professions as well, so that was a fantastic opportunity to work closely with people from different workplaces and backgrounds and have a common goal.

“The projects needed to be finished at the end of that six-month period, and left in the community so it was something that would continue on once complete.”

Ms Edwards said her everyday podiatry work sees her working mainly with people aged over 65, so she understood the importance of people receiving a break from social isolation.

“At our formal launch we had residents of Port Fairy aged care home Moyneyana House in the room with us.

“The residents were telling us about the last time they rode a bike, and about funny things like having to ride a bike with a skirt on.

“Their faces would light up when they spoke, and for me that is what this is all about.”

The project team also helped develop information that would allow other Cycling Without Age groups to be set up, and she said she was pleased that a Portland chapter is now in the process of being established.

“They are popping up everywhere now – it’s fantastic,” she said.

A relative new arrival to Portland (her family moved here in 2006), Ms Edwards said the program had also given her the opportunity to see more of our region, and to see it through different eyes, including the dairy sector, learning about our Indigenous communities, exploring Budj Bim, meeting a host of amazing leaders throughout the community as well as travelling further afield to have a behind-the-scenes tour of Victoria’s parliament.

The group also met with similar leadership program members from across the state while in Melbourne, which was another highlight day for her.

Four people from Glenelg Shire joined the 2019 LGSC cohort, which created its own opportunities throughout the year.

Most of the LGSC gatherings were outside Portland in locations such as Warrnambool, so the four participants would often ride-share and enjoy the socialising and also debrief during the journey.

“Those conversations were interesting; I think everybody took something different out of the day.”

She has kept in touch with her cohort and said she had developed some friendships with people she would never have met otherwise.

Since she completed the program she had grown the courage to apply for an acting manager’s role in her department at Portland District Health, and successfully took that on.

She also became the chairperson at Bayview College, a position she only dreamed she would have been able to do before LGSC.

“There will be more study, too, to formalise my interest in management leadership.

“Being sponsored by the South West Community Foundation I felt I needed to pay that forward,” she added, noting that she joined the board of United Way Glenelg to help continue good works in the wider community.

Overall, how did she feel at the end of the program? “Renewed and enthused,” she said, with plenty of goals to work towards.