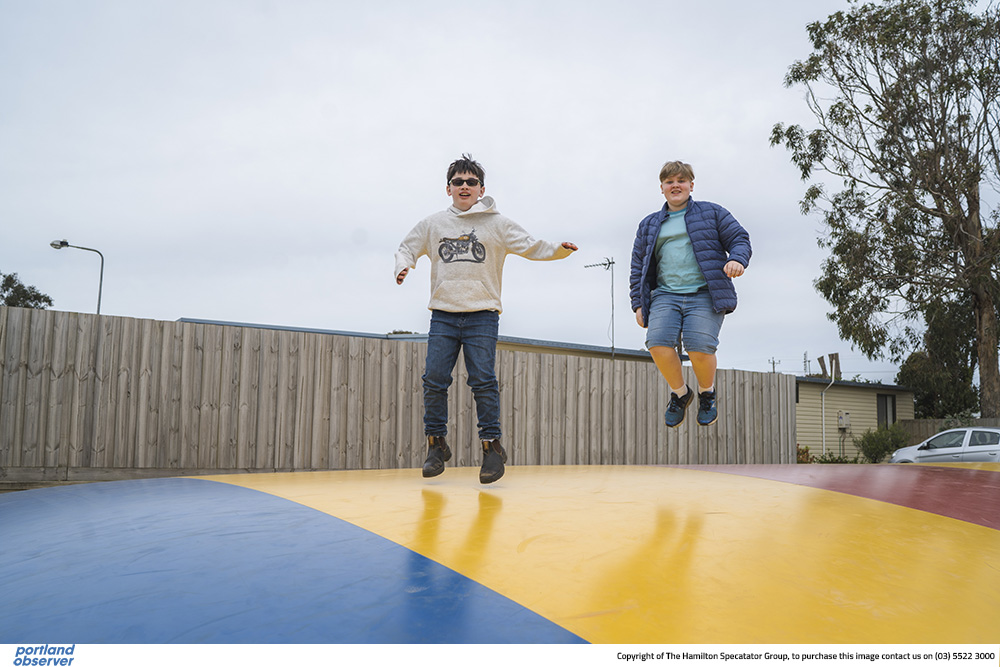 BALLARAT visitors Harry Doyle, 9, and Tom Doyle, 9, were jumping for joy that they were able to have a Portland holiday this week when they stayed at the Portland Tourist Park on Garden St. Picture: MICHAEL PETERS 200929MP31
By Angela McFeeters

HOLIDAY accommodation providers reported mixed occupancy levels over the past two weeks of school holidays while regional Victorians got used to the latest COVID-19 restriction levels.

“It’s not so much like a ghost town anymore, which is good: that has unfortunately been out of everyone’s control,” Glenn Berry from Dutton Way holiday park Holiday Lifestyle Henty Bay said.

“We have been about 40% full, but the weather’s been shocking, and we haven’t had a lot of campers in tents.

“I think a lot of people are still iffy about if amenities (toilets and showers) are open, which they are, and we still do COVID-19 cleans three times a day.

Three local holiday park operators told the Portland Observer their self-contained accommodation was the most popular choice for guests at the moment, with Henty Bay guests also asked to bring their own pillows.

Denise Pekin from Portland Tourist Park on Garden St said they had been careful to do deep cleans after each cabin was used.

“There are lots of rules and regulations to follow,” she said.

Their camp kitchen had not re-opened and there had been no enquiries about it, however their jumping pillow and playground were popular among the children staying there.

“We’re down on caravaners because at this time of year we’re usually having the Queenslanders and Western Australians returning home.

“We’re probably on par with the same time last year for cabin bookings.”

Mr Berry estimated about half the people staying at Henty Bay were anglers who often hauled big boats, and they had been enjoying their time out on the water chasing, in particular, large southern bluefin tuna.

Some of the most dedicated campers weren’t turned off getting into the great outdoors, however, with basic campsites featuring only toilet facilities and taps in Lower Glenelg National Park relatively busy.

Parks Victoria western Victoria spokesperson Dale Antonysen said campgrounds on Parks-Victoria-managed land was capped at 60% of normal capacity at the moment to allow for COVID-19 physical distancing, nevertheless more than half (65%) of available sites in Lower Glenelg National Park (LGNP) were booked during September.

Most of the LGNP campsites are alongside the Glenelg River north-west of Portland.

Cape Bridgewater bed and breakfast operator Dennis Carr said his business, Sea View Lodge, had been “extremely busy” with a range of guests.

Single parents with multiple children and families had been enjoying the opportunity to step across the road - rather than needing to pack a car – to get to the beach.

“Last time (the COVID-19 lockdown lifted) we had guests from far away such as Yarrawonga and Mildura, but this time we have guests from closer such as Hamilton and Warrnambool as well as Bendigo.”

Rooms there had their own bathrooms, however Mr Carr had staggered breakfasts so there weren’t too many guests in the dining room at a time, he said.

Enquiries at the Portland Visitor Information Centre were also well down on the same time last year.

“This time last year nearly 50% of our visitors were from Melbourne; of course there are none (from Melbourne) this year,” a Glenelg Shire Council spokesperson said.

“Regional Victorians are making up the numbers with a lot of people from Geelong and Surf Coast as well as Ballarat.”

He said business had equalled last year during September thanks to good support from locals and western Victorians.

“It’s strangely solid – next week we’ll go back to opening until 5pm at Sportspower (after limited hours for several months), and Compleat Angler has been open until 5pm right through.”

Mr Elijah wondered if discretionary spending at retailers like his could become an issue for businesses by December or January, a traditionally busy period, however.

“You’d hope that for the holiday accommodation and holiday parks you get the visitors - the tourist people have to make a bob,” he said.

“We are booked out for Christmas – providing the restrictions on Melbourne people ease,” Mr Barras said.

“I’m getting at least 15 to 20 people calling a day asking if we’re opening for Christmas: they’re all trying to get out.

“At the moment you tell them we can take a booking but can’t guarantee anything.”

Mr Barras said the increased interest was probably in part due to changed plans at Great Ocean Road and Warrnambool holiday parks with some parks deciding to accommodate less people and using a ballot system to determine who those guests would be.

Other holiday parks on the Great Ocean Road owned by the government had decided to shut entirely, he believed.

“We missed out on the Easter and ANZAC holidays, grand final long weekend and a Labour Day weekend for South Australia (this weekend) – this is only our third weekend open since March – but the last two weekends and this weekend have been very good: things are looking promising.

“Hopefully things are on the up now.”

Serving up a century
9 hours ago