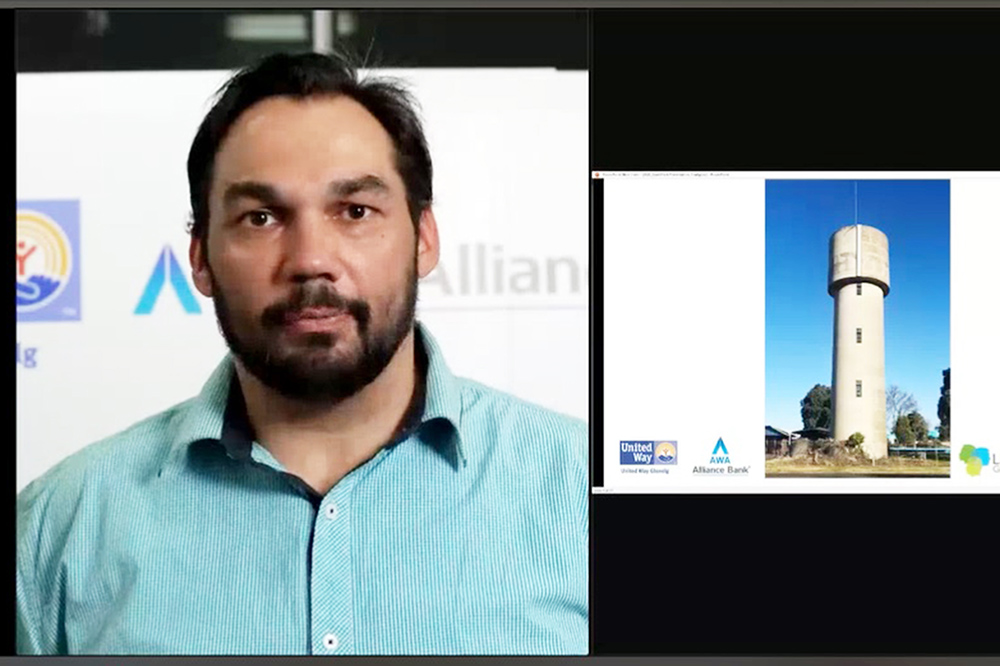 HEYWOOD’S water tower is a “blank canvas” ready to be painted, and its base beautified, Troy Lovett said during his pitch for funds. Picture: SUPPLIED
By Angela McFeeters

An impressive $45,800 was pledged by the Shark Pitch audience, which peaked at more than 170 registered online participants, although co-organiser Nicole Carr from United Way Glenelg said many more people were believed to have been watching from home on shared devices.

Four people spoke about three projects close to their hearts with Harley Doedee from Portland’s Kyeema Support Services speaking confidently and drawing the highest pledges of cash for his project at $17,000.

He started with a compelling case: many older community members caring for a family member with a disability were afraid to die, worried the care they would receive wasn’t as good as they had provided, and fearful they didn’t have a suitable home to live in.

Current support from the National Disability Insurance Scheme (NDIS) didn’t always provide everyone with suitable or accessible housing, though, so he was pleased his employer, Kyeema, was planning on building two new independent living houses for five adults with a disability.

Each project had six minutes of time allocated for live-to-camera pitches before audience members were urged to make pledge by the evening’s host, Neil O’Donnell.

The speakers did not know how much had been raised for them until after the pledge sessions were finished; Mr Doedee had said he hoped just over $8000 could be contributed.

“That has blown me well and truly out of the water – I definitely wasn’t expecting that (amount),” he said, clapping his hands over his mouth after learning that $17,000 had been committed to the project at the end of the evening.

That money would help them build a wonderful new shared outdoor entertainment space for socialising and relaxing, Mr Doedee said.

“There’s a long list of things we could do - adding extra seats, more lighting, and even build it a bit bigger now,” he said.

The Rotary Club of Portland’s Beats Cycle for Hope committee was unable to hold their biggest annual fundraiser, a trivia night and auction, this year due to COVID-19 restrictions.

However the people the committee seeks to support – community members diagnosed with cancer and their carers – were continuing to face cancer diagnoses nevertheless.

In 2011 Mr Beattie, an avid fitness fanatic, had dreamt up and participated in the first Beats Cycle for Hope with the support of friends.

The family-friendly bicycle ride and fundraising event from Portland to Cape Bridgewater now continues annually and was fortunately able to occur this year just before COVID-19 restrictions halted public gatherings.

Ms Pitts said in 2018 alone about 95 people from the region were given a new diagnosis of cancer.

Mrs McErvale urged people to help them raise at least $10,000 so the committee could continue to provide the hope and optimism they create from gifts of vouchers they describe as random acts of kindness.

Gym memberships and other supports also make the lives of people going through cancer or their carers or families a little bit easier as a result of support for Beats Cycle for Hope, Mrs McErvale said.

Being a recipient of a voucher herself had “made our hearts smile: we sincerely appreciated it,” she added.

The amount committed to the project after she was allowed back to the event - $15,000 - was astonishing, she said.

“I am so proud – I am just speechless,” Mrs McErvale said.

Heywood’s Troy Lovett has been driving a team project to create a colourful and historically significant mural on his town’s water tower through his 2020 participation in the Leadership Great South Coast program.

A long-discussed idea at home, Mr Lovett said he saw the tall tower as a “blank canvas” for a tribute to Indigenous military service personnel like his great-grandfather Frederick Amos Lovett, who served in World Wars one and two however returned to his country in the Lake Condah region only to find others - all non-Indigenous people - had received government allocations of land to farm on.

“If this is new to you, then this is the reason why this story should be told.”

The mural could become a part of the increasingly popular silo art trail, be a feature on the end of a Great Ocean Road tour, become a highlight on the Great South Coast Arts Trail and complement the Budj Bim World Heritage Landscape, bringing additional tourists to the region.

“We have secured 90% of funding for the project,” Mr Lovett said.

With additional funding of $12,000 extra features such as landscaping and interpretive signage, linkages and maps to other significant landmarks could complement the mural, he said.

“It would also be great if we could document the process along the way.”

Audience members quickly agreed to chip in significant funds to support the mural’s completion, and by the end of the evening nearly $14,000 had been raised.

The Port of Portland and United Way Glenelg also chipped in with significant pledges, and Bayview College principal Michelle Kearney agreed to match the donations that students made on-the-spot.

A diverse range of community members including children contributed their pocket money and some council candidates also chipped in.

In addition to cash contributions several pledges of labour, goods and services were made.

Donations and offers of goods and services remain open; for more information go to givenow.com.au/unitedwayglenelg.

This year’s event was hosted on app CrowdCast with the support of many people behind-the-scenes.