Scholarship helps cap off a good year for Maya 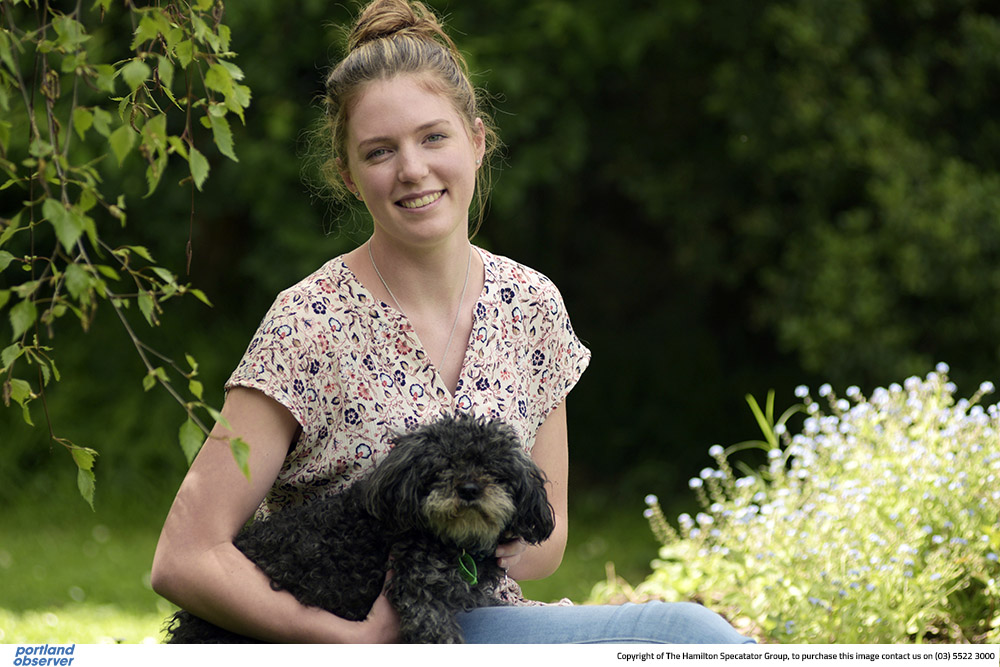 MAYA Jones (pictured with her dog Poppy) is delighted she has been able to secure an Andrew Jack Memorial Scholarship for her studies at Deakin University’s Waurn Ponds (Geelong) campus next year. Picture: KAREN HODGE 201006KH44
By Angela McFeeters

MAYA Jones counts herself as fortunate in many ways.

She was lucky enough to get a gap-year job in the education sector at the beginning of this year, and recently found out that she is the recipient of a 2021 Andrew Jack Memorial Scholarship ahead of her return to study next year.

“It’s really lifted a great weight off of my shoulders,” she said.

“Knowing I can purchase my textbooks and a laptop is such a relief.”

A passionate animal enthusiast with an interest in climate change, deforestation and agriculture, Ms Jones was accepted into a Bachelor’s degree in Zoology and Animal Science at Deakin University’s Waurn Ponds (Geelong) campus when she finished her schooling at Portland Secondary College last year.

“I knew I wasn’t going to be able to rush straight off to uni; during school I wasn’t working much, so knew I wanted to defer for a year.”

She secured a job at All Saints Parish School this year and believes if she had continued her previous casual job in the hospitality sector she may have lost her position due to COVID-19.

Although she has saved hard this year she worried she might not be able to pay her way in Geelong, so she began a search for local scholarships.

The Andrew Jack scholarship ended up being the perfect fit for her, so she put together an application and was recently notified that she was successful.

Administered by the Rotary Club of Portland, the scholarships are for students – including mature-age students -planning to begin tertiary study in an agricultural discipline.

Mr Jack was a Diploma of Agricultural Science graduate who spent most of his working life as a farmer as well as serving in various community roles.

He never had a family of his own although he did farm with his sister Beryl; when he died in 2011 he left most of his estate to charity, requesting that his Rotary friends administer the trust.

Scholarships are for between $5000 and $8000 a year, and can be continued for the length of the course if the student meets the committee’s criteria for ongoing support.

“It’s super awesome that Andrew Jack’s legacy’s living on – that he’s still able to support so many people.

“No words can describe how important this scholarship’s been to me.”

Ms Jones spent her childhood between her Portland home and her father’s Merino property, which is surrounded by farmland.

“I’ve had pets my entire childhood and always loved nature.

“I love all animals but definitely cows, goats and sheep - I love them the most.

“It was actually the bushfires at the start of this year that highlighted to me the extremes that are happening because of climate change, and I think there’s a really great demand for research into the impact climate change is having on flora and fauna.

“We have more than 300 endangered animals in Australia, and I want to be on the frontline of working for the bush for a sustainable future.”

Ms Jones said she and a close friend hope to rent a house together so they can focus on getting through their study in relative quiet.

They are looking forward to moving to a new city for the first time, and Ms Jones believes Geelong should be a good fit for her.

“I think Geelong is the perfect mix of country and city,” she said.

A small number of scholarships can be awarded to additional select applicants in 2021. Applications are open until the end of the first week in January; for more information, go to portlandrotary.org.au/ag-scholarships.