Fingers in many artistic pies 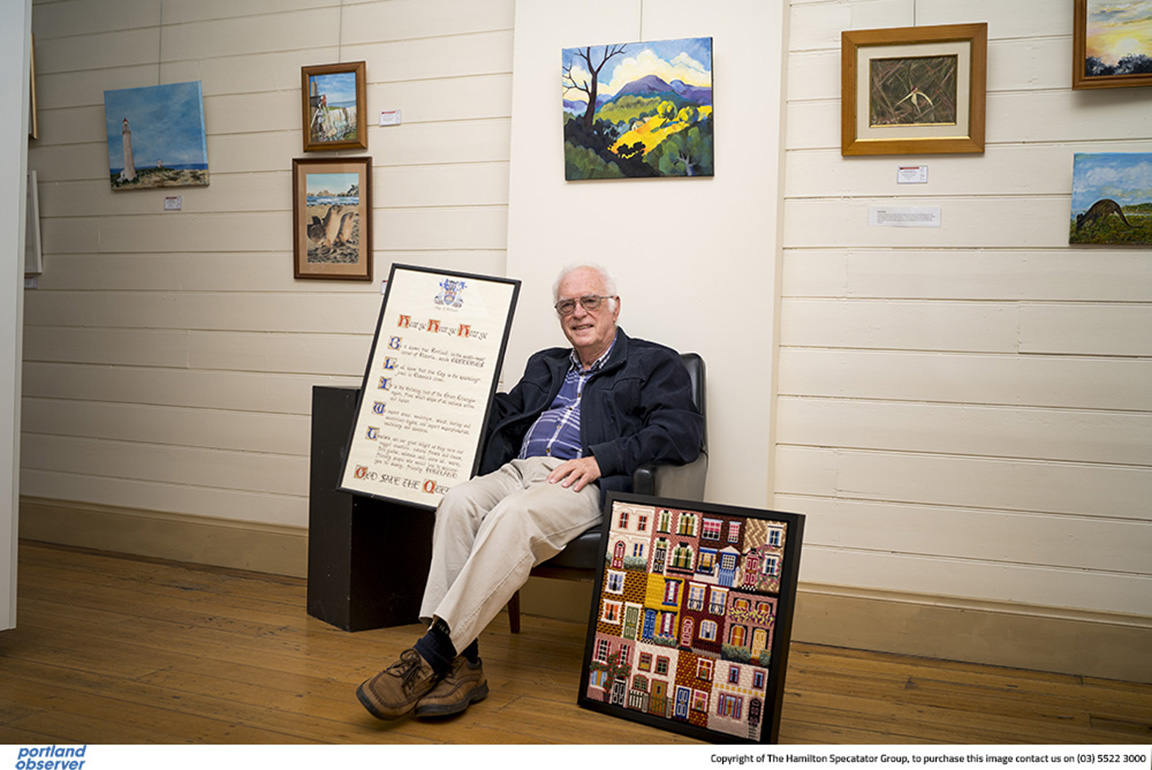 PHIL Darby has turned his hand to many artistic endeavours over the years, and three of them are on display here. He is holding an example of his calligraphy, on his left is his one tapestry effort that he just decided to do over the course of a “long, cold” winter while watching television, and above his head is a painting he completed this winter during the coronavirus pandemic restrictions. Picture: MICHAEL PETERS 200917mp01
By Chalpat Sonti

IT’S only fitting that the painters Phil Darby most admires are the Old Masters, such as Leonardo da Vinci.

Because in his own way, the Portland artist is something of a Renaissance man when it comes to his own work.

Not for him a focus on one type of art. He paints, for sure, but then there’s a variety to go with it.

Calligraphy for one. Drawing’s another. Then lead lighting. Even tapestry got a go, when in his true style he put everything into one project.

The odds are fairly short that you’ve seen some of his work around the city. Or been taught by him.

And as he nears his 80th year, there’s no signs of slowing down.

Mr Darby grew up in Geelong and has always loved art.

“Art of one kind or another has just been part of my life as far back as I can remember,” he said.

“I’ve drawn all my life. As a small child I was apparently very good at it. I can remember those drawings, particularly in black and white, and I used to like drawing all the time.”

And as a student at Geelong High School he was steered towards becoming an art teacher, though it wasn’t his first choice.

“I wanted to become a commercial artist but my teacher said that was very competitive and why don’t you become an art teacher,” Mr Darby said.

“Strangely enough at Geelong High School I was the only one that wanted to do matriculation, sixth form art (equivalent to VCE today).

“I couldn’t do it at school so my father organised two tutors from Geelong Teachers’ College to tutor me and that’s when I saw real art. My teacher at school was stuck in the 1920s.

“And that was when I decided to become an art teacher.”

That was in the late 1950s and after doing an art course in Geelong and teacher training in Melbourne Mr Darby said he was “thoroughly unprepared” when he stepped into the classroom.

“My first real training was in class,” he said.

He worked around the state, beginning at Timboon, before moving to Echuca, where he met and married wife Carol.

Then it was off to Orbost, before a stint at Corio – “I couldn’t wait to get out of the place” – and finally Portland, where the couple moved in 1984.

Mr Darby taught at the old Portland High School until 1990, before that merged with Portland Tech to become Portland Secondary College.

He ended up as head of graphics. But he also did plenty of learning along the way.

While in Orbost he did two years of part-time study to ensure he had four years of tertiary study, without which he couldn’t gain a qualification to become a senior teacher.

That involved a 500km round trip each week to the old Gippsland Institute of Technology (now part of Monash University) but was an experience he thoroughly enjoyed.

“Part of that course was a unit in children’s illustration,” Mr Darby said.

“I had all sorts of great ideas at that time of chucking in teaching and becoming an illustrator and I did some illustrations for my brother-in-law, but it never happened.”

Orbost was where he also took up calligraphy.

“Someone wanted some nice neat print under photos in a display cabinet,” he said.

“I looked up and found out about a thing called calligraphy and away I went.

“It was easy. The funny thing though is you look at my handwriting and think ‘he’s a calligrapher?’ but it’s an entirely different approach.

“It’s just something I happened to get good at.”

His handiwork can still be seen around Portland – he’s often been called on to do signs, particularly for the Uniting Church – but perhaps it’s his association with the late Portland town crier Syd Cuffe that he is best remembered.

Mr Darby produced the scrolls with which Mr Cuffe entered three championship events, and it was painstaking work (the one in the photo on this page took 14 hours) and with little room for error.

He also produced calligraphy for the Glenelg Shire Council and predecessors on many occasions and other examples can be seen at the TS Henty and inside Portland police station.

But he didn’t keep his skill to himself, teaching others through the likes of the PCEC and U3A.

“I’ve seen one or two who’ve gone on to do quite nicely with their calligraphy but the only problem is now you can do pretty good calligraphy on a computer and no-one comes to (learn) it any more,” Mr Darby said.

Lead lighting came into his and his wife’s lives when they lived in Corio.

“I did a weekend course in lead lighting there and designed a window for a church in Ballarat, but when we came here I eventually found out there was a lead lighters group and joined it (about 20 years ago) and started doing stuff,” Mr Darby said.

“What we do is work to sell in the shop (at the Julia Street Creative Space).”

The group takes on outside projects as well – one of note Mr Darby worked on was a window at All Saints Catholic Church for the Loreto Sisters.

“I didn’t come up with the idea, but I designed it all in terms of how you do it in glass – it’s basically my interpretation of someone else’s design.

“It’s just one of those crafts that has appeal. It’s colourful and technical. Carol’s currently doing a big (project) for our daughter so it’s something we both do.

“We found a craft we both enjoy and can work on together.”

Then there’s the quite different, but equally painstaking, craft of tapestry.

“One particularly long, cold winter I sat in front of the TV and did that,” Mr Darby said, referring to the tapestry in the photo.

“I looked up if there was anything interesting on TV but having finished it it’s one of those things you do and move on.

“I wanted to move on to some other style of cross stitch and do some designs but that’s just never happened. But I was particularly pleased with that one, considering I’d never done it before at all.”

However, Mr Darby did design a large tapestry that hangs in a rear room of the Uniting Church.

“It has half a million stitches in it,” he said.

“A big group did that off and on over a number of years.”

“Whatever the students did, I liked them to take pride in what they did,” he said.

“Not just finish something off and say that’s good enough. I’ve always believed don’t do something if you can’t do it as well as you can.

“The most success I had with students were the ones that took that on board.

“There’s no doubt if a student succeeds in something, it’s the best moment in teaching.”

His attitude to art in general is similar.

“I deplore a lot of art that doesn’t show proper artistic skill. You can dab anything on canvas and give it a name, and there’s plenty of them hanging in the National Gallery.

“But where’s the artistic skill of Leonardo and the Old Masters?”

Over the years Mr Darby has always painted, perhaps more prolifically while in Orbost, where he learned both sides of the popularity coin.

“I sold a number at a Rotary exhibition in Bairnsdale one year, then took another three there the next year and didn’t sell one,” he said.

Mr Darby is reluctant to sell any now as he does fewer and would rather hang them in his house.

Abstract landscapes and portraits are what he loves most and these days he works mostly in acrylics, attracted by the fact they dry quicker and are of such good quality now they can imitate the oils he started out on “as long as you’re not trying to paint like an Old Master or something”.

“The painting (in the photo on this page) went through numerous changes before it got to what it is in a way you can’t do with tapestry or calligraphy,” he said.

“They’re both technique driven and I guess in that sense painting is probably more fun to be doing at the time you’re doing it when you’re not so obsessed by technique.

“That might contradict what I’ve said about artistic skill but you take on board the skills of painting.

“While I wouldn’t think calligraphy or tapestry is quite as fun as painting, the satisfaction is right at the end when you’ve seen what you’ve done.”

He is a member of both the Portland Artists Society (where he is a past president) and Bolwarra art group and enjoys the companionship in both.

“The Bolwarra groups is a nice atmosphere where you’re just sitting there painting,” Mr Darby said.

“I help some of them, but I don’t run it (Heather Rowsell is the convenor).

“You’ve got Anna Linden who does a lot of painting, Steve McCarthy and his pencil drawings, Liz Francis with her mixed media landscapes and the longstanding members like Jeanette Huppatz and her landscapes and Sue Mellblom and her water colours, and lots of others.

The coronavirus pandemic restrictions have made things hard for the groups that make up the Julia Street Creative Space.

“We still have bills to pay but don’t have much money coming in,” Mr Darby said.

“The shop is open again and groups will be able to come back and work but we’re just keeping our heads above water.

“The (artists society) probably make the most money to help support the place.

“It’s funny, people come up here from Melbourne, they walk in here and they’re gobsmacked.

“They think ‘wow, imagine having all this space’, yet Portland people still don’t know it’s here.” Both Mr and Mrs Darby have been involved in many community groups during their time here, and in another form of artistic expression they were among the founding members of the Portland Dance and Social Club, which celebrated its 30th anniversary last year.