A tale of inspiration and gratitude 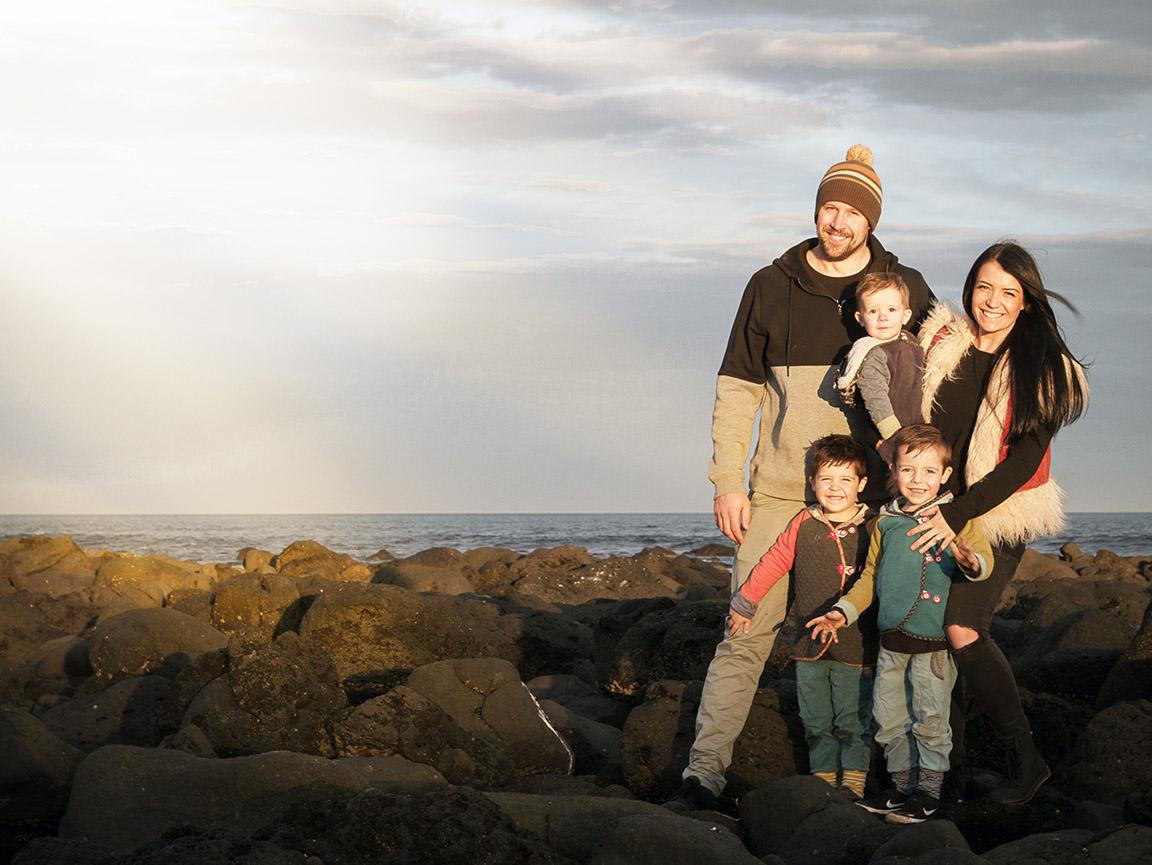 THE Hunt/Johnson family have had a tough time of it in 2020 yet have plenty to be grateful for – not least the support they received from the region. Pictured are Morgan Hunt and Erin Johnson with their children Malu Hunt, 22 months, being held by Ms Johnson and in front four-year-old Jarvie and five-year-old Harlan Hunt. Picture: SUPPLIED
By Chalpat Sonti

ERIN Johnson thought it was a normal Christmas when she, partner Morgan Hunt and their three children paid a visit to family in the Portland/Heywood region last December.

Instead, the family’s lives were to change forever – yet out of the adversity has come more inspiration.

Ms Johnson, a former Portlander, had brought the kids from Geelong to see their grandparents.

Her youngest son Malu had just turned one and everything seemed to be going fine.

“He was growing and developing well but we noticed he did this little eye roll,” Ms Johnson said.

“His eyes went back in his head, but we didn’t think too much of it. We thought maybe he was a bit tired or something like that.

“It wasn’t until Christmas when we were down in Portland and the eye rolls would happen more than one at a time.

“On Boxing Day we took him to emergency (at Portland hospital) and he had what the doctor told us was a seizure.

“They knew we were from Geelong so they recommended we get him to the hospital there.

“We spent a couple of weeks in hospital and they did MRIs, scans and an EEG.”

Those tests confirmed Malu had infantile spasms, a severe and rare form of epilepsy.

Malu was put on a high dose of steroids as doctors tried to work out what was causing the seizures (he had several more in hospital).

Which was where Royal Children’s Hospital came into the picture.

After further tests there and several different medications, none of which stopped the seizures, the decision was made to operate.

“After an MRI they could see the right hemisphere in his brain hadn’t developed properly.”

The diagnosis was focal cortical dysplasia, a brain development abnormality, and it was decided the best option was to “disconnect” the right hemisphere of the brain.

To complicate matters, the RCH appointments and stays were after the coronavirus pandemic restrictions were introduced, meaning both Mr Hunt and Ms Johnson couldn’t be with their son at the hospital at the same time.

An operation in July took out part of Malu’s brain, a procedure known as a hemispherectomy – while he still has seizures in the right hemisphere, because of the disconnection it can’t send that information anywhere else in the body.

He was in the hospital for four weeks.

However a side effect has been he was paralysed down his left side following the operation and has had to learn to use his arm, eat and walk again (Malu had only begun walking a few months earlier), while he’s also had partial vision loss.

“His speech is really starting to take off, which is really good and he’s heading down the right track.”

Also incredible was the support the family received from this part of the world.

“Mum (Julie Bond, now living in Heywood) looked after the other kids (sons Harlan, 5, and Jarvie, 4) for us and so many people in Portland stopped by to drop off food,” Ms Johnson said.

“We’re very grateful to be part of such an amazing community.”

And those deliveries took place despite the Portlanders only being able to drop the food off and leave, thanks to the pandemic restrictions.

But that isn’t the end of it – enter Charlie Woodford, who from being inspired by Malu’s story has done something inspiring himself.

Mr Woodford knew Ms Johnson from the time both were playing sport at Tyrendarra Football Netball Club (Mr Woodford was a junior at Heywood where his father Robert lives) – and he’s also living in Geelong where he works in civil construction while also studying for a diploma in youth work.

“We don’t really know each other super well though I’m born and bred Portland as is Erin,” he said.

“But I was motivated by Malu’s story and his family. They got dealt a pretty rough hand and I was just inspired to take on a bit of a challenge.”

With the coronavirus isolation, Mr Woodford decided to fundraise for RCH’s neurology ward by running a marathon.

“I don’t have any kids but Royal Children’s Hospital is a pretty special place,” he said.

“I thought there was no better time to do something and it’s been good.

“I signed up with a running coach who does online programs and I’m doing one for 12 weeks.”

That involves running about 50-60km a week, and he’s halfway through a program which will see him run a marathon on November 23.

Of course under the current regulations there are no mass races, so the event will be virtual – he plans to run a loop around Geelong.

And while training’s been a challenge, he’s been overwhelmed by the support.

“At the start I was hoping to raise a few thousand dollars but I’ve been blown away by the response,” he said.

Which has also been appreciated by Malu’s family.

“He was following our journey and that inspired him, but we’ve been very lucky that it did too,” Ms Johnson said.

To donate to the cause visit https://fundraisingsuperheroes.everydayhero.com/au/marathon-for-malu. THE Hunt/Johnson family have had a tough time of it in 2020 yet have plenty to be grateful for – not least the support they received from the region. Pictured are Morgan Hunt and Erin Johnson with their children Malu Hunt, 22 months, being held by Ms Johnson and in front four-year-old Jarvie and five-year-old Harlan Hunt