Bring back the beach 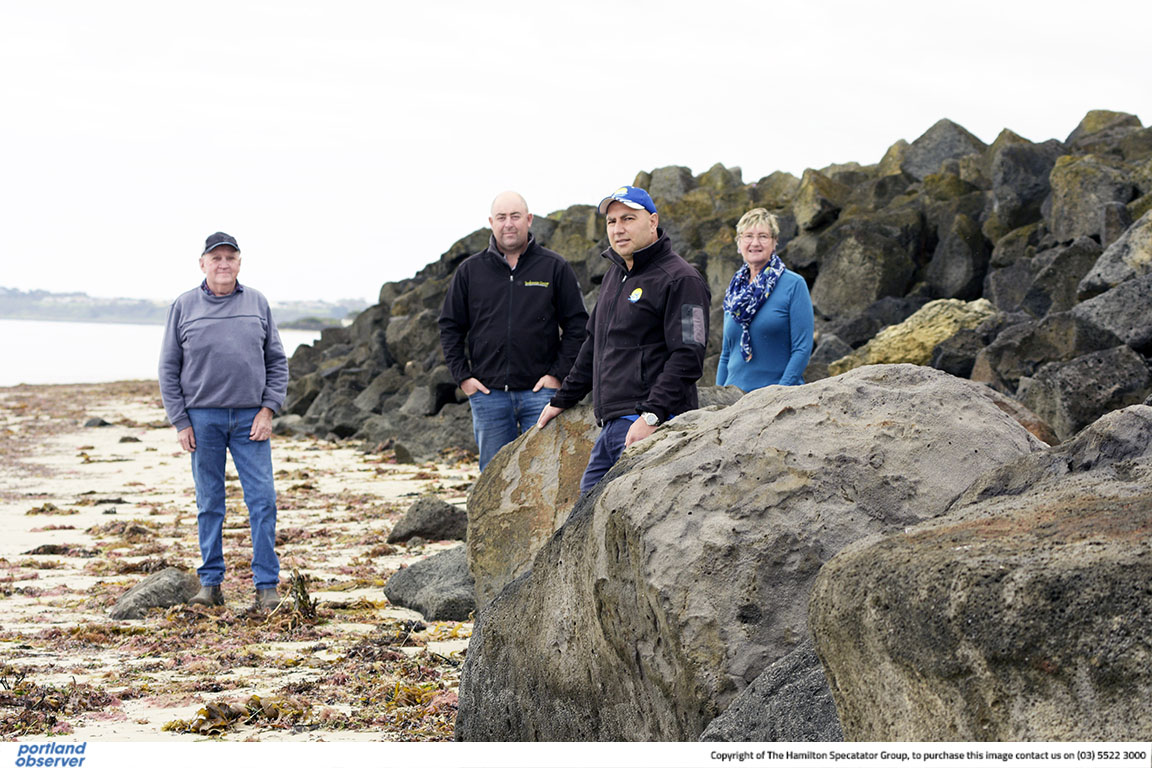 LISTEN to the science… Portland Beach Safety and Restoration Alliance members Vern McCallum, Scott McFarlane, Dean Beckman and Pam McLeod amid some of the rocks they say are a danger at the rock wall at Allestree. After spending two years monitoring the sea wall as part of a state government citizen science project, they propose an innovative solution. Picture: KAREN HODGE 2010119kh08
By Chalpat Sonti

YOU might call it going back to the future, but that’s exactly what a local group of citizen scientists wants to do with the Dutton Way sea wall.

The Portland Beach Safety and Restoration Alliance is pushing for the sea wall to be replaced by ‘whale tail’ (T-shaped) reef groynes, which it says has been done successfully around the world.

The Alliance has written to Victorian Energy, Environment and Climate Change Minister Lily D’Ambrosio asking for her to use the groynes as a “scientifically proven” protection measure.

It submitted evidence of several recent near-misses of people either slipping on dislodged rocks or going close to being crushed as dislodged rocks rolled towards them, including three young children in one day last month, which it says could have been fatal.

Alliance executive officer Dean Beckman has first-hand experience of the safety issues, the Portland Bay Lodge owner’s young daughter being one of them.

“There’s been well over 20 reports documented,” he said.

Mr Beckman said the existing sea wall was only ever a band aid solution which had worked well enough for its purpose of stopping erosion, but now with it being undercut, the time had come to embrace the latest proven technology.

As a proof of the groyne strategy work could start on the area around the existing groynes at Dutton Way.

The reef would stop the wave action. With more than five million tonnes of sand needing a home, the Port of Portland had indicated it was supportive of the concept and this sand could also be used to cover the existing wall area.

Aside from safety, the plan would also see true beaches returned to the area, as was the case before the sea wall was built.

The Alliance is also battling to overcome some historical misconceptions, including that the sea wall – built to address erosion after the K.S. Anderson Wharf was built at the Port of Portland – was scientifically engineered.

It has some good evidence in form of member Vern McCallum, who was working for the council at the time.

“I ended up putting the rocks into (the wall),” he said.

“We just kept putting them in and building the wall up. It wasn’t engineered at all. There were limestone rocks there first and we just put rocks on top of them.”

It was important to “work towards a safe result by using the latest science”.

“That will give landowners and visitors proper security knowing we’re using the science-based techniques,” he said.

“The whale tail groynes are the most successful in the world, and the theme sort of fits in here.”

Pam McLeod would like to see the beaches returned to their former glory.

“I’ve got fond memories of it as a kid, holidaying down here and having wonderful safe times on a safe beach,” she said.

“Now with our grandkids, we’re always on edge, watching them while they’re on the rocks then in the water. Safety’s out the window down here now.”

She remembered walking right through from Narrawong at low tide, and Mr McCallum said he went the same journey in a three-tonne Austin truck as a child.

“This area has been underutilised ever since (the sea wall went in),” he said.

“It’s a wasteland, the rocks stop people coming on to the beach. The waves hit the rocks at an angle and run right down the wall. That scours the sand out and loosens the rock.

“If they’ve got groynes out there it’s going to make a big difference.”

“It was historically ‘the’ beach and for that reason this needs to be done.”

Ms D’Ambrosio said the government was “partnering with Portland community groups, the local council and Deakin University to assess how best to manage the Dutton Way sea wall”.

“We have already invested a $50,000 Public Safety on Public Land grant to improve fencing and signage and monitor any movement of the cliffs as well as assessing options to improve drainage from the clifftop,” she said.

“Coastal areas are dynamic and right across Victoria they are facing pressures from climate change and natural events like landslips and storms.

“It’s important for the community to use designated access points and follow all warning signs when visiting the beach.”

The Department of Environment, Land, Water and Planning established the Victorian Coastal Monitoring Program in 2017 and that has monitored the beach from near Lowe St at Dutton Way to Narrawong.

The Alliance has taken part in the citizen science process by helping to provide drone imagery along beaches, wave buoy monitoring, and historic shoreline analyses. Detailed modelling to determine the erosion and sea level rise impact trajectory on Portland’s coast will be conducted next year before any final decision is made.