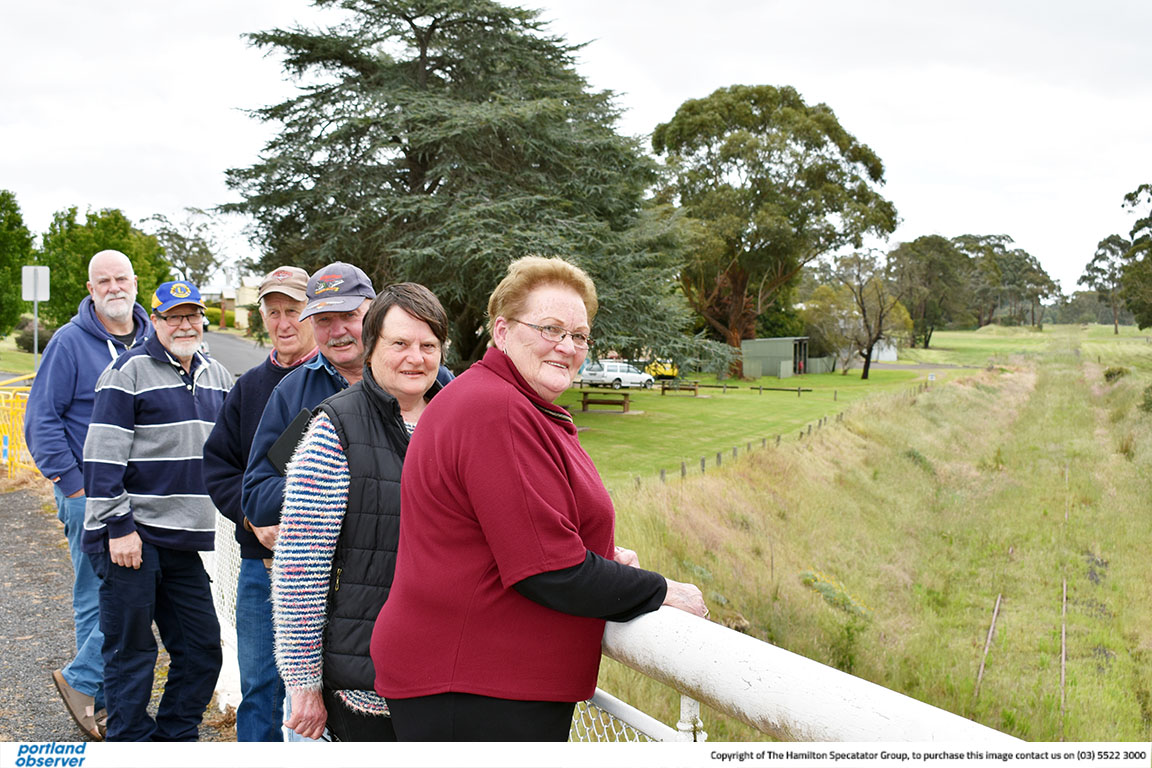 THE Dartmoor Rail Trail is about to become a reality, following a four-year battle with bureaucracy to turn a neglected eyesore into a source of community pride – and a tourist attraction.

Work will start on the rail trail much sooner than expected, after the Glenelg Shire Council received more than $2 million in federal government funding for community infrastructure and local roads recently.

It is from the same pool of money that will see a major upgrade to netball facilities at Hanlon Park in Portland, among other projects.

The rail trail will be on 1.3km of disused track on 11.1ha running through the middle of the township, from Radiata Rd to the Glenelg River.

It will be a 3m-wide walking and bike track on a sealed surface which would also be wheelchair-friendly. Exercise stations along the way have been mooted, as well as “sidings” to the Dartmoor General Store, river and village green area.

There will be tables, seats and shade along the way as well as a “healing garden”, possibly some historical markers and a car park at one end.

The area has been the centre of a massive community effort since 2016, when Dartmoor Lions Club member David Spencer decided something needed to be done about the eyesore and fire hazard.

Much of the area has been cleared of old fences and rubbish and weeds removed, trees tidied and the railway line sprayed.

“When we first kicked it off with voluntary working bees it had been used for little horse yards, cattle yards, and we wanted to tidy it up,” Mr Spencer said.

“Then we got kicked off because we weren’t allowed to be in there.”

That was because the land was owned by VicTrack – the last train came through in 1995.

“They said they’ve got a maintenance man who’s been coming to Dartmoor for years, I disagreed, and he started coming again after we caused a fuss,” Mr Spencer said.

“They didn’t do much of a job and we thought we could do better ourselves if we got control over it, so that’s what we tried to do.”

Which was easier said than done – VicTrack wouldn’t lease the land to a community group – by this time the Dartmoor and District Progress Association got involved – so locals turned to the council for support.

VicTrack finally agreed to lease it to the council this year, and the project was shovel-ready, thus ideal for funding.

Association president Wendy Dowling has worked tirelessly over many years to bring the community together to keep the town looking as good as possible, and she said the rail trail project was seen as something that could both enhance Dartmoor’s beauty as well as provide a walking track for both locals and visitors.

“I think it’s a project that will give people something to take on post-COVID when morale in communities is pretty low,” she said.

“It’s an ideal time for a project like this, to be so positive, it’s a marvellous thing. It’s pretty exciting for a small community to have something like this.

“We have to have things that attract tourism, the community’s changed so much, and tourism is an enormous part of the whole shire.

“This will be an asset to the whole shire.”

“People are looking to do something local rather than something farther away. We’ve got a lot to offer here.”

Mrs Dowling paid tribute to the council for its support – “without it this would never have happened” – and the entire community that got behind it.

“I’ve written a lot of grant applications over the years but I’ve never had support like this,” she said.

“Just to see the broad range of people involved is great, including lots of volunteers who don’t feel comfortable on groups, but have been doing things in the background and out of the limelight..

“It’s a very resilient little town which works extremely hard to survive and improve itself.”

“It was too big for a us as a Lions Club and we’ve also had lots of support from DELWP (the Department of Environment, Land, Water and Planning) as well,” he said.

“Gone are the days they would be sitting in their shed waiting for a fire to start – now they’re out doing things like this. They’re far happier doing wonderful things around town and we’re far happier too.

“(With the rail trail) we believed we might get a few grand this year, a few grand next year, and so on, so to get it all in one go has been enormous.”

“We just can’t wait for it to start,” Mr Spencer said.

“I’ll start believing things when the contractor turns up.

“But once we make a start we, and those that come after us, can build on it over the years.”