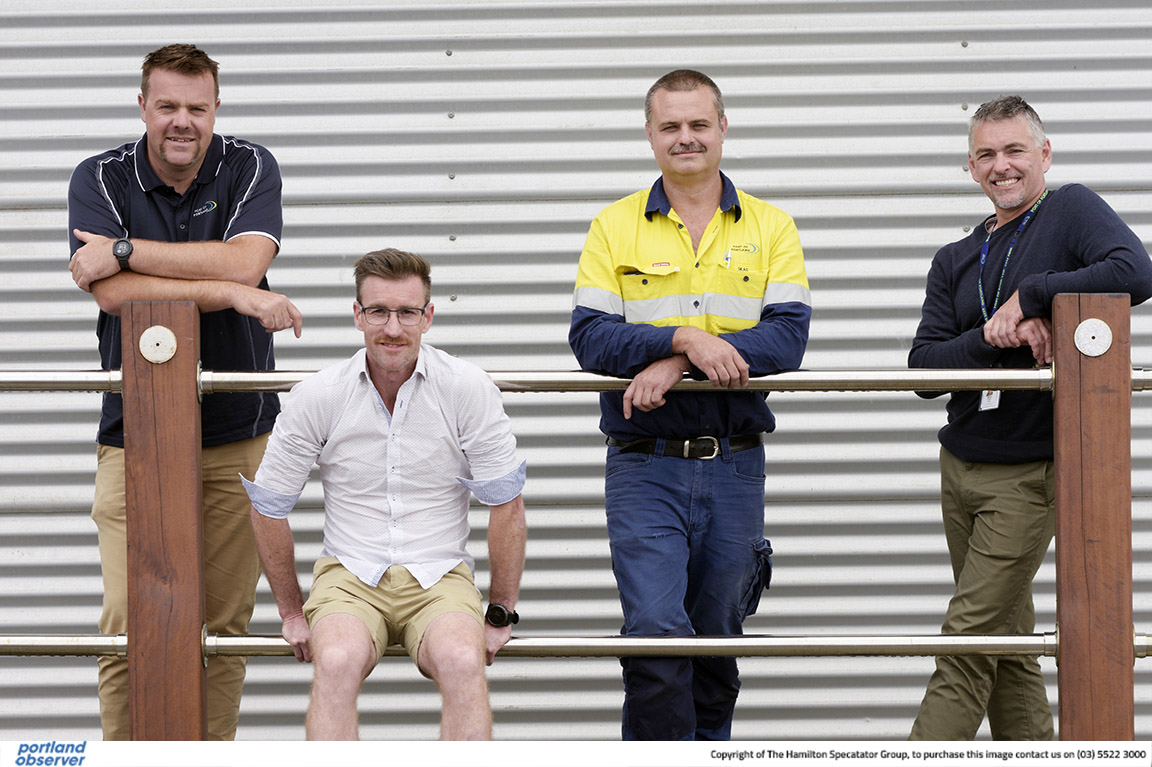 LEIGH Wiseman, Shannon Curran, Silas Holt and Matt Peters are part-way through their mo grow as part of Movember, raising money and awareness about the need for men to take care of their mental and their physical health. Picture: KAREN HODGE 201111KH27
By Angela McFeeters

MOVEMBER participants can exploit the element of surprise this year, hiding their new moustache grows under masks when out in public.

It’s something four Port of Portland Movember sign-ups may well be taking advantage of when their moustaches become more thick and lush in the next couple of weeks – or if the “mos” aren’t looking quite as sharp as they would like.

Nevertheless, they are still keen to let people know they are putting in a big effort to grow a good moustache and raise money for Movember.

Movember has been held annually in November since 2003, and aims to help reduce the number of men dying prematurely from a range of causes including mental health issues and prostate and testicular cancer.

Participants are asked to start from a clean-shaven face and grow out what they can during the month, all the while raising money for awareness-raising and research and having conversations about why they have joined the campaign.

A focus on looking after yourself is as important as ever in 2020; while COVID-19 hasn’t affected too many people in Portland directly, hundreds of employees including dozens at the port have been working from home since March.

“It makes the office banter a bit harder, and I miss all the functions,” Leigh Wiseman said.

“Generally, when everyone’s in the office we can cook lunches and things like that to raise money, too: the port gave us a good donation though.”

While Silas Holt and Mr Wiseman are participating in Movember for the first time, Shannon Curran has been a part of it many times and said he has a close friend who is a Movember ambassador and “has a few mates who have committed suicide.”

“Movember’s a good cause: it raises awareness for men’s health and annoys my wife a bit,” he laughed, adding that his children call his mo “the crimson caterpillar.”

Mr Curran said the year had been a challenge for people trying to keep socially connected, and some people had struggled with that while others had enjoyed working from home.

“We have had 4 o’clock drinks on a Friday to try and get around (to talk to) people working from home,” he said, adding that they use video app Zoom for the catch-up and often do a quiz for some fun.

Looking after the needs of children studying from home as well as keeping up your own work had been intense for Mr Holt, but now that the children were back at school Mr Holt said he had really enjoyed working from home.

He said it’s important to remember that too often men don’t go to the doctor when they should, and they also die younger.

To find out more about the team and to donate to them go to https://au.movember.com and search for Port of Portland.