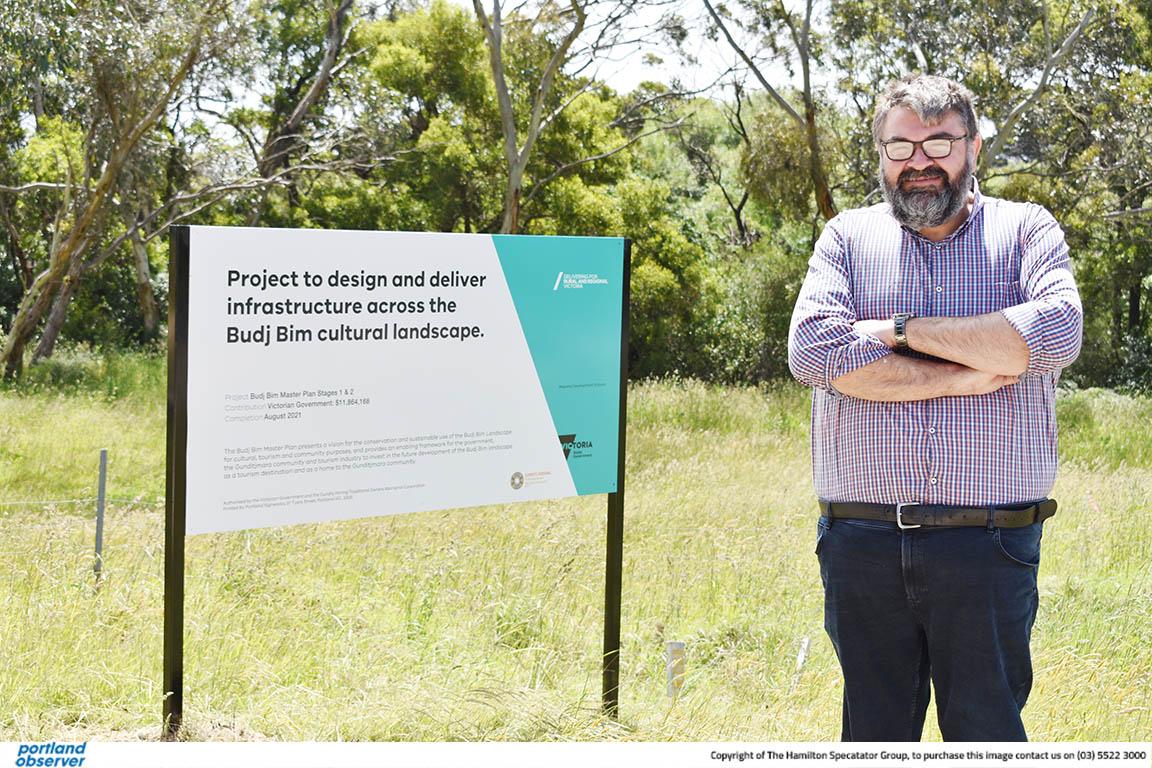 GUNDITJ Mirring Traditional Owners Aboriginal Corporation chief executive Damein Bell at the southern end of the Budj Bim Cultural Landscape – the area behind this sign at the Tyrendarra Recreation Reserve will be transformed. Picture: CHALPAT SONTI 201116cs01
By Chalpat Sonti

WORK is about to begin on the region’s world-renowned tourist attraction after the Budj Bim Cultural Landscape infrastructure project received final sign off.

“There’s just a couple of final contracts to sign.”

Work is expected to begin in the next month at five sites covering about 100 square kilometres – the Budj Bim National Park, Lake Condah (Tae Rak), Kurtonij and Tyrendarra Indigenous Protected Areas and at the Tyrendarra Recreation Reserve.

A sign has been erected at the recreation reserve, the southern entrance to the landscape, and the area behind it will provide a relaxed introduction to the landscape with orientation information, picnic shelters and toilets.

“People can call in, have a bit of a rest and collect their bearings,” Mr Bell said.

“It will give them an outline of the cultural significance of Budj Bim, the World Heritage Listing and the places they can go and the tours they can book.

“We want them to book a tour to experience the Budj Bim landscape and learn from what our ancestors engineered over thousands of years.”

During cultural heritage surveys items such as flints were found at the site which were dated at 7000-8000 years old.

“From what we can tell it was a campground,” Mr Bell said.

The work is being done in association with the Tyrendarra Recreation Reserve committee of management.

Among the other work will be a traditional agriculture centre at Lake Condah, a car park and new pedestrian bridge at the Tyrendarra IPA, a new lookout at Budj Bim National Park and new infrastructure at Kurtonij.

“The site preparation is the main thing because we are dealing with a cultural landscape,” Mr Bell said.

“There’s a lot of cultural preparation we have to respond to and through consultations with the Gunditjmara community we’re pretty much there with the cultural management plan.”

All the work is expected to be completed by August next year, and the project has been described as a ‘game-changer’ for tourism in the region.

Mr Bell paid tribute to all involved in making it happen – including government agencies, land managers, property owners and neighbours across Glenelg and Moyne shires.

“It’s been an incredible effort involving private land, public land and Aboriginal community-owned land to see it all come together,” Mr Bell said.

Much of the project planning this year was done against the backdrop of the coronavirus pandemic restrictions.

“It moved us all online and changed the way we worked, but we still got there,” Mr Bell said.

Funding for the whole project includes $11.86 million from the state government and $436,000 from the federal government.

● Meanwhile laser mapping at the sites are revealing eel and fish traps and stone huts not recorded before.

The technology, known as LiDAR (Light Detection and Ranging), scans through thick scrub and bush to identify and map the terrain, revealing features not seen by the naked eye.

A collaboration between Gunditj Mirring and Land Use Victoria has provided the world-first opportunity to map and visualise the natural and man-made landscape using the technology.

Once captured, full ownership of the mapping data and spatial information was transferred over to Gunditj Mirring.

Recent data obtained has helped identify hidden groups of stone hut bases under vegetation and a 115-metre extension of a fish trap complex in the aquaculture system.

Mr Bell said: “It was amazing to see what the laser mapping could do, on country, to show the engineering of our ancestors so that we can show our elders.”

“For all that’s been taken and stolen and handed back since colonisation, we’ve found that country itself holds its stories and as we’re the Traditional Owners, we’ve got the primacy to access these stories,” he said.