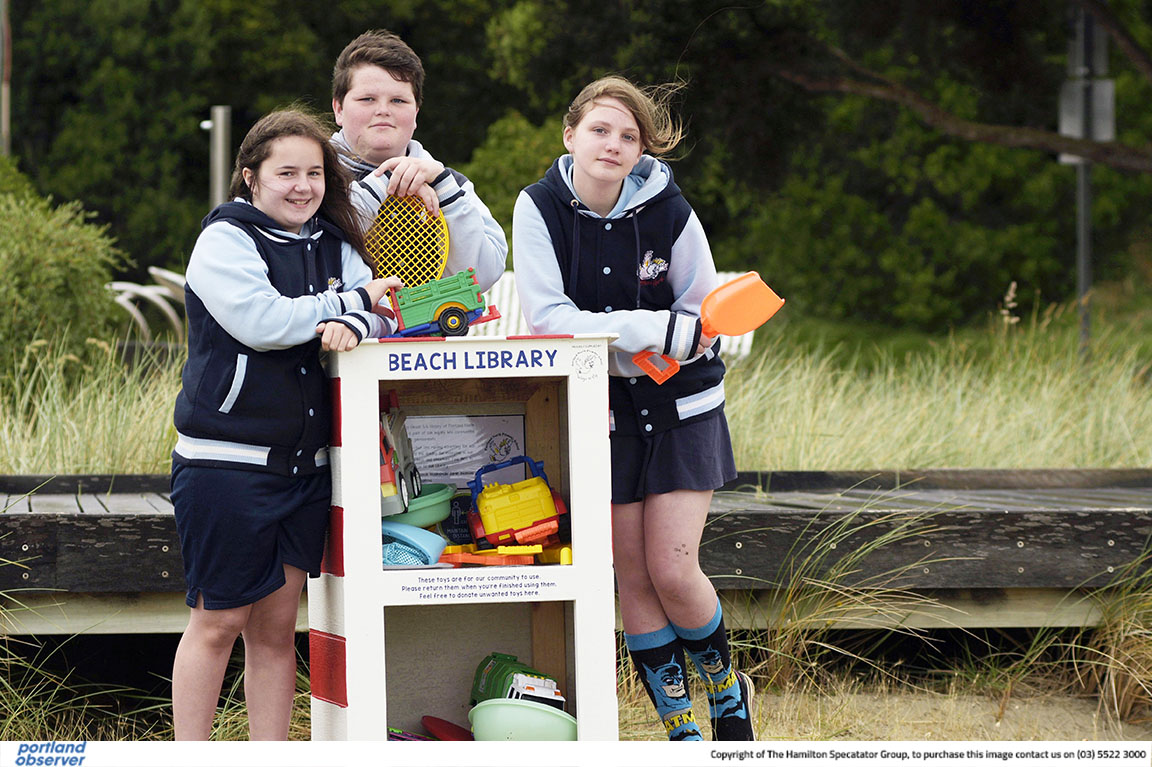 TYLER Watson, Lou Lou Flannery and Laura Harper, all 12, were pleased to help stock the beach library at Nuns’ Beach when it was set up on Wednesday. Picture: KAREN HODGE 201216KH04
By Angela McFeeters

THERE’S a bright new feature at Nuns’ beach, and it’s also hoped it will brighten the days of some visitors to the area.

The Portland beach “library” contains sand-play toys rather than the traditional books, and is the brainchild of Portland North Primary School students – with the assistance of an internet search – student Raine Readett from the grade 5-6 class said.

Visitors to the beach can take a look at the toys in the library box and choose one or two to play with in the area before returning them to the box at the end of their visit.

It’s a gesture many parents would appreciate after getting to the beach and realising they forgot the toys, or that holiday makers could enjoy without the need to carry their own toys in an over-packed car.

“We were looking at ways to help children with something to do at the beach,” Raine added.

Their teacher Hayley Jones said the grade 5 and 6 class had been studying community and government systems, including ecology, economy and culture, and identified that beach culture was a strong feature of Portland’s community.

“The students decided there wasn’t much for children to do at the beach,” she added.

Toys were collected from donations by school families, a visit to op shops and a few new purchases, and included buckets, spades, trucks and sifters on the first day the box was set up at the beach.

The impressive and heavy box was built by handyman Jamie Watson, whose son Tyler was in grade 6 at the school this year.

Jarvis Morton said the toys would probably be popular with kids aged 12 and under, and some of his classmates said they would happily borrow spades and buckets from the box before returning them at the end of their beach visit.

Donations of sand trucks directly into the box would be appreciated, Ms Jones added.