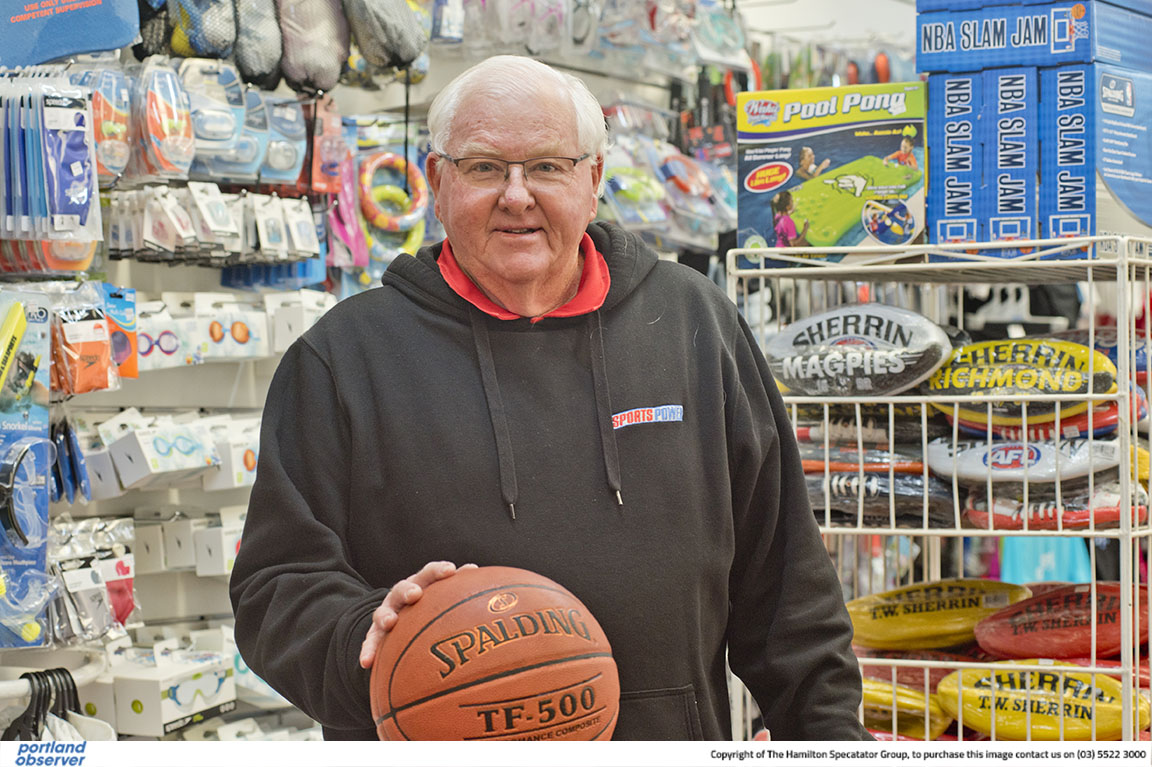 SPORTSPOWER and Compleat Angler owner Bruce Elijah is one retailer who is enjoying the Christmas cheer that has been shown by local shoppers. PICTURE: Observer Files
By Chalpat Sonti

AFTER a year like no other, Portland retailers are cashing in on plenty of Christmas cheer as locals decide to do their gift shopping close to home.

And an influx of visitors has provided many retailers with a timely bonus, as they begin the recovery from the coronavirus pandemic restrictions.

The timing couldn’t be better, with the Christmas take crucial to most having a good year.

Those the Observer spoke to all reported an excellent December, with the prospect of even better to come in the next few days – Christmas Eve being the busiest shopping day of the year and those immediately before it close behind.

SportsPower and Compleat Angler owner Bruce Elijah is one of those who is bracing for a big few days.

He said locals were out in force to support retailers.

“We’re very, very happy with the local support and I think Portland, Heywood and districts need to be congratulated,” he said.

“They’re shopping more locally because of the virus. They don’t want to go out of town and take the chance, so they’re probably reluctant to go to (Mount Gambier or Warrnambool).”

Mr Elijah said both shops had also seen quite a few visitors, especially during the weekend.

“It even got to the point at one stage we had to ask a group to exit because there were too many in the shop,” he said.

The Christmas trade capped off “quite a remarkable year”.

“I’ve done 57 years of Christmas (trade) and I can’t remember a year you weren’t happy enough,” he said.

“You’d have years you were down, but it wasn’t down by much, and it carries you through the rest of the year.

“Christmas fires a lot of businesses for the entire year.”

Like other shops he would open later each day for the rest of the week.

“If there’s people out there shopping, you’re not closing,” Mr Elijah said.

Smith’s Showcase Jewellers owner Shaun Smith said business had been brisk for a while.

“The build up to Christmas for the month of December has been really good,” he said.

“We’ve been really happy with it and had a lot of support from local shoppers.

“I’ve found since the coronavirus people have been shopping more local, and it makes such a difference to our business.

“It’s been a good year and that’s down to people being locked down and not being able to travel and just shopping local.”

The coronavirus had made business planning through the year difficult.

“We’ve kind of just gone day for day and we really didn’t know how it was going to play out.

“It’s been a bit difficult organising stock and trying to predict the future, but we’ve ordered as normal and it’s been good.”

The next three days could make it even better.

“They are extremely important, they are normally the three best days of the year,” Mr Smith said.

Briony Peters of Welcome Home Giftware said her business had also been busy for the past month.

“I think everyone is just really enjoying being able to make the most of our freedom.”

It was also vital to do well now.

“Christmas sets you up for the year and if you have a good Christmas you get a good start to the year,” Ms Peters said.

“It’s also the fun-nest thing about working, (having) all hands on deck.”

Her shop had seen a mixture of locals and visitors.

“There’s definitely been a lot of out-of-towners through since the lockdown lifted,” Ms Peters said.

“There seems to be a lot of people visiting families and holidaying.”

But, like the other retailers, it was locals who were stepping up.

“A lot of people are saying they’re making the effort to do their shopping locally as much as they can,” Ms Peters said.

“And they’re surprised what they can find here.

“People have been less confident in travelling and to be in more familiar spaces I suppose.”

And the most popular gifts in a gift shop? “Our chairs are always a huge winner, pots and plants have been selling well and always things like candles and diffusers,” Ms Peters said.