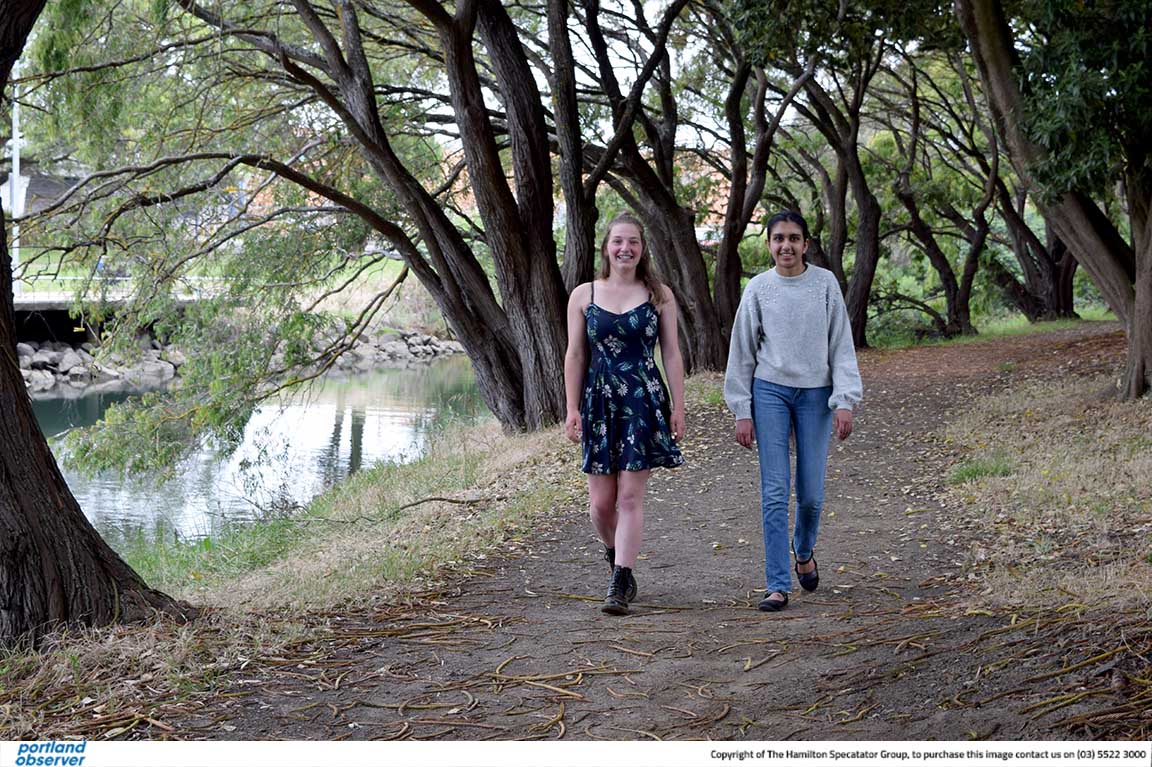 STEPH Turri and Bhoomija Chauhan were pleased to celebrate the end of their secondary education on Wednesday after finding out they had received the top scores at their respective local public schools. Picture: OLIVIA COTTIER 201230C09
By Angela McFeeters

FINAL year secondary school students had their results released on Wednesday, nearly one month later than usual after COVID-19 caused major disruptions to the school year.

Three young women were the top-scoring VCE students at their respective local schools, and all are hopeful the scores they achieved will allow them to enter their preferred university courses.

Steph Turri, 17, from Heywood and District Secondary College said she had achieved “what I wanted and a little bit extra” with her ATAR (Australian Tertiary Admissions Ranking) so she could qualify to enter an accounting degree at Melbourne’s Swinburne University or Deakin’s Warrnambool or Geelong Waterfront campus.

The HDSC dux said she had some terrific support behind her to help get through the “rollercoaster of an experience” that was 2020, although there were moments when she contemplated dropping out.

“There were also parts that were great and amazing,” she added.

Portland Secondary College’s dux Bhoomija Chauhan, 17, moved from the United Arab Emirates in the middle east to Portland in 2018, and had to grasp how the VCE system worked as well as tackling the final three years of her study.

She appreciated the flexibility of her teachers and missed in-person interactions with her classmates, but enjoyed video calls that often featured family pets and other insights into the lives of classmates that she may not have experienced otherwise.

Video calls to her range of friends around the world in Dubai, India and Canada also helped her keep on top of her mental health, she added.

“We celebrated birthdays and played games: I think my favourite was when we played Ludo,” she laughed.

Bhoomija was one of just three students at the school who also achieved a VCE Baccalaureate for strong results in a wide cross-section of studies.

She studied the Hindi language by distance education as well as doing PSC-based subjects.

The hard work paid off, and she achieved an ATAR of 95.6 that she hopes will allow her to study medicine and dentistry at Monash or LaTrobe universities in Melbourne or at an Adelaide university.

Becoming a GP just like her grandfather would be her ideal job, allowing her to interact with plenty of people, she said.

“I have backups, too: I have applied for engineering degrees as well,” she added.

Both students decided to study a year 12 subject in year 11, and both recommended that future students do that if they are able so it can help them get a grasp of the pressure year 12s feel.

“It helped me feel less anxious by year 12,” Steph said.

She said the year had started with a big decision: she had studied economics by distance education in year 11 and began it as a year 12 subject this year, however wasn’t enjoying the class and had the ability to drop it because she had completed one year 12 subject in year 11.

“I decided I can focus more (on remaining subjects) rather than stretching myself too thin.”

Bhoomija also has an important decision to make at the end of 2019.

She hadn’t got the score she wanted when she took on a year 12 subject early, so repeated it and did better in 2020.

Bhoomija urged people going through the VCE to take notes throughout the year rather than cramming them into the end of it, while Steph said students sometimes need to take time for themselves so they can keep on top of things.

“Relax and breathe: it’s okay if that little big of homework doesn’t get done,” she said.

While Bhoomija hopes to launch straight into her tertiary education this year, Steph is taking a break in 2021 and has switched her travel plans from an adventure around Europe to some time living in Perth with a friend and working there.

Zali Stephens, 18, from Bayview College was that school’s dux, however said she did not want to be interviewed by the Portland Observer and provided some notes instead.

Zali secured a University of Melbourne Principals’ scholarship and had been accepted as a resident of University College.

She is now hoping to secure a place studying design at the University of Melbourne, something she had been striving for over a long period.

Zali was educated at Narrawong Primary School and then Bayview College.