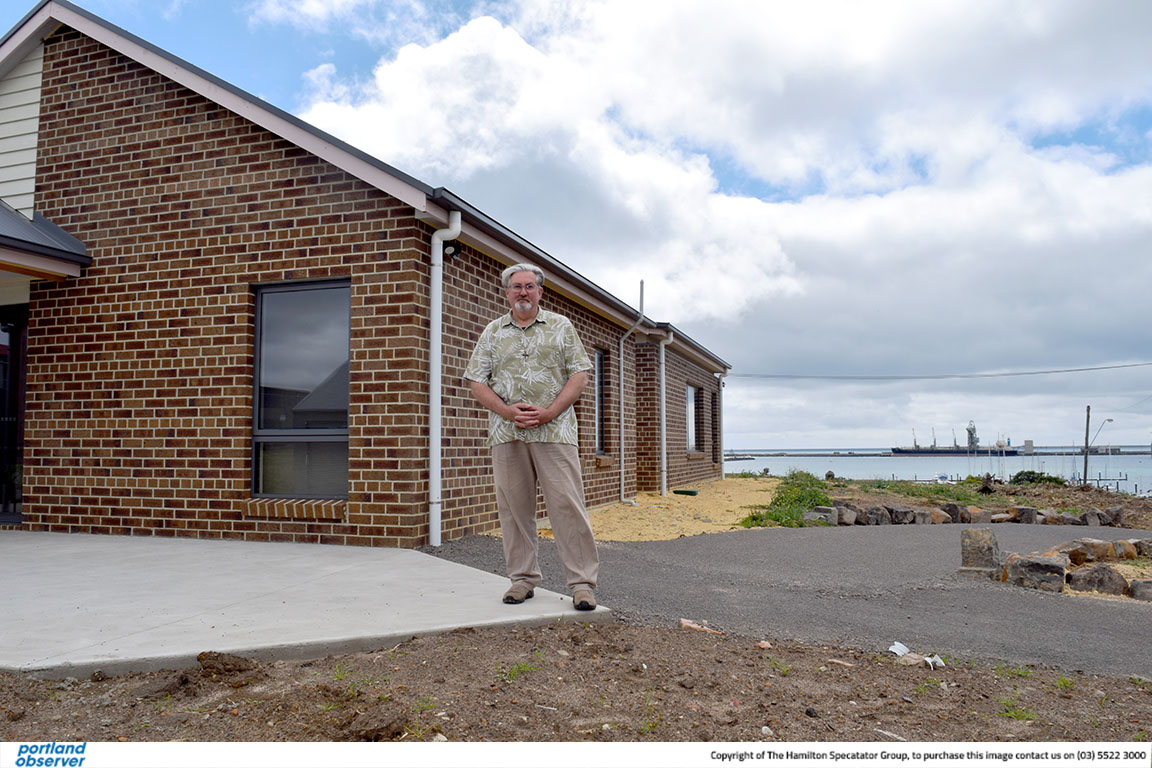 THE new building includes a section for church business (next to Father Tait) as well as a private residence that has sweeping views of Portland Harbour. Picture: OLIVIA COTTIER 201229OC23
By Angela McFeeters

A $440,000 rebuild of the All Saints Catholic Church presbytery and office is now complete, with the residence now a pleasure to live in, Parish priest Father Greg Tait said.

It’s also nearly half the size of the previous presbytery at 220 square metres because such a large building was no longer required, Fr Tait said.

“There were six bedrooms and a housekeeper’s quarters in the previous building,” he said, adding that the residence now has just three bedrooms as well as sweeping views of Portland Harbour from the combined kitchen and dining room.

In a separate section of the building accessed from the rear (and connected to the residence with a lockable door) church business can be completed and smaller meetings as well as children’s activities can be hosted.

“Professional standards require that we don’t see people in our home nowadays,” he said.

There is a two-desk office space inside the rear entrance and a small meeting room with large windows and audiovisual connectivity alongside the office.

A kitchenette allows people to make their own tea and coffee there rather than having to access the private residence of the priest, helping make their facility more suitable for church activities such as day conferences.

There are many benefits expected from the new building, in addition to the reduction of hazards when issues like water leaking through light fittings when there was heavy rain occurred.

The old building was cold year-round, for starters, and it was expensive to heat it as well.

“Our electricity bills were $3000 to $4000 a year,” he said, adding that they expect their costs will now be dramatically reduced.

The church has also benefited after about half the newer bricks from the previous presbytery were bought by a local paver; they will be reused elsewhere.

Fr Tait has worked on the project since he arrived in Portland five years ago, and knows it well after effectively becoming site manager, stationing his office at Bayview College next door while living in holiday accommodation or a caravan park until last month.

Godrik Constructions of Mount Gambier oversaw the project, but staff weren’t always allowed to visit the site due to COVID-19 border closures, however local sub-contractors were able to keep it ticking over, he added.

Local people may notice that the building is located higher up on the block than the previous one, and was constructed there in part because it would allow the parish to rent it out if there was not a resident priest living onsite in the future.

The footings of the original Catholic chapel for Portland are now covered by a floating slab “raft” on top of limestone, with part of it also underneath the kitchen area of the new presbytery.

In addition, the remains of an 1858-built cottage have been left under a mound between the All Saints church and the new presbytery.

All bluestone found in the recently-demolished presbytery will remain onsite and be used for garden beds and to line paths.

The next plans for the site are to plant some trees between the residence and the church and eventually create some gardens.

An eight foot-high (2.4m) cast bronze cross taken from the church’s former steeple in 2014 will be reused as the centrepiece of a “resurrection garden,” which will also feature a fire pit and seating.

The garden would have a view of the harbour and be a wonderful addition to the public space area of the church grounds, Fr Tait said.