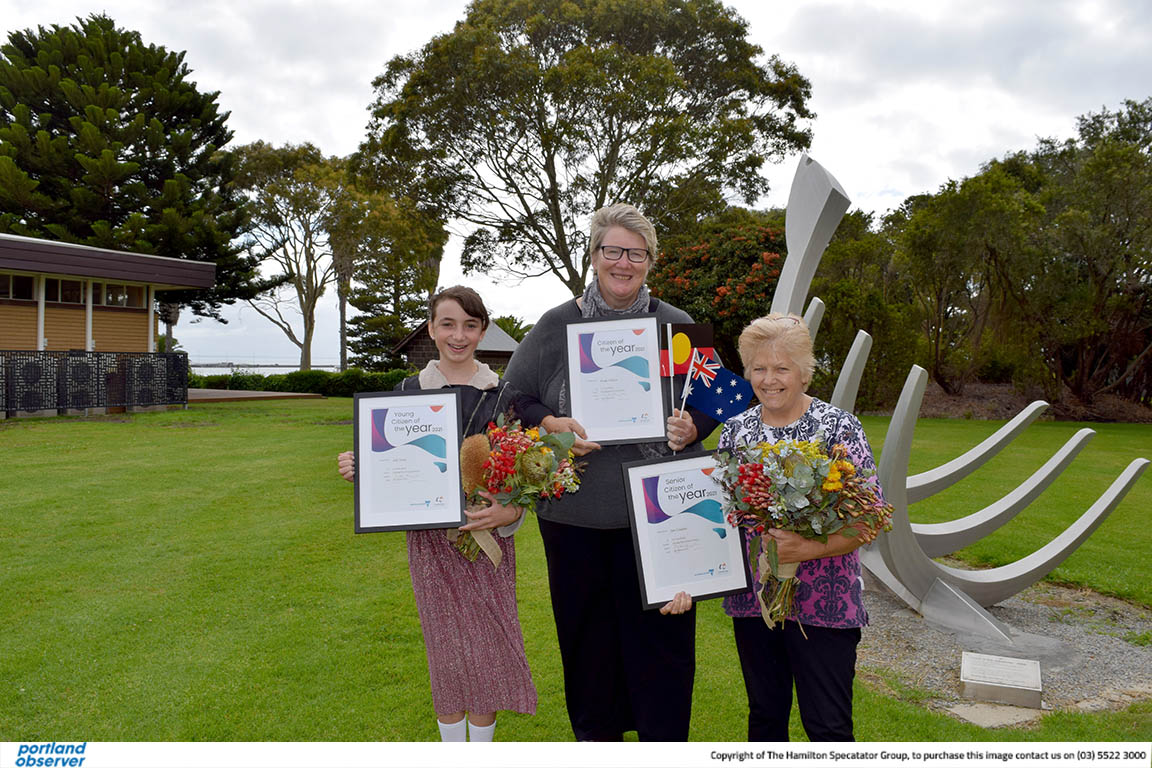 THE power of music (and the arts in general) to bring communities together has probably never been more evident than during the coronavirus pandemic restrictions last year, and that has also been recognised in the naming of the Glenelg Shire Citizen of the Year.

Rosie Collins was named the recipient of the top honour at the Glenelg Shire Council Australia Day event at the Portland Civic Hall on Tuesday.

Ms Collins is the driving force behind Glenelg Shire Musical Mates (another member of the group, Jess Cook, was also a finalist in the awards), an online group which shared their message of music – and encouraged many to take part – to thousands, particularly during the lockdowns.

“I am extremely humbled and I thank the person that nominated me, from the bottom of my heart, that thought I was worthy enough,” Ms Collins said.

“I would not be standing here accepting this award if it wasn’t for everyone’s contributions to the Musical Mates page.

“Whether you were someone that posted videos or simply supported and encouraged the musical activity, I thank you all.”

Ms Collins also gave an insight into the founding of the page.

“During our initial isolation the one thing that could connect us many ways was music,” she said.

“Staying connected, even if it was gathering around a device on a Saturday night and then being able to watch it again on replay showed the invaluable benefits of connection.

“It’s extremely beautiful to know that family members and friends, interstate and around the world, were able to see their ‘person’ perform from afar, in a supportive musical environment and receiving such warm responses from so many.”

“Music has never been more important in uniting our community and providing meaningful connections, especially during a time where social contact was limited,” she said.

“The Glenelg Shire Musical Mates group was a saving grace to many, providing regular entertainment and a chance to listen to much loved local artists.

“The platform has also served to provide support for musicians of all abilities, to give them an opportunity to play together while in isolation, through the power of social media and modern technology.

“Through the power of music, she has utilised this universal language as an effective common ground in a year of keeping apart.

“It is people like Rosie who make Glenelg Shire such a wonderful place to live and we thank her for her selfless contributions to our community, particularly during such challenging times.”

Jan Lineker (Portland) and the late Des Wombwell (Casterton) were named joint winners of the Senior Citizen of the Year award.

Mrs Lineker was honoured for several roles – as a Girl Guide leader for more than 30 years, an L2P mentor (and now coordinator of the driving program for young people), a Justice of the Peace and bail justice who in the former role coordinates weekly signing sessions at Portland library and for her work with the Anglican parish of Lower Glenelg.

“It’s been my great privilege over the last 40 years I’ve lived in Portland to serve the community,” she said.

Mr Wombwell, whose family was presented his award in a ceremony at Casterton at the same time, died during the year at the age of 84.

He was best known as a cricket and football umpire, retiring from the former at the age of 82, but also served on many other community groups.

There was also a joint award of the Junior Citizen of the Year, which went to Lily Irwin (Portland) and Emily Eastman (Henty).

They received their awards at the Portland and Casterton ceremonies respectively.

Lily, 12, has championed causes such as education, the environment and health and wellbeing.

She organised lunchtime clean ups with staff and students at Portland North Primary School (she will attend Tenison Woods College in Mount Gambier this year) and has educated the wider school community on reusable plastics and minimising waste.

Lily is also an animal lover who formed the Animal Hearts group at school and regularly volunteers for several organisations, including the State Library of Victoria (where she is on the kids’ committee), Kick Start and Landcare Victoria.

She was also recognised as the 2019 Junior Landcare Award Recipient and was the National Volunteer of the Year Award Recipient the same year, while also the recipient of a Fred Hollows Foundation Humanity Award last year.

“I’m honoured to be nominated,” she said.

She thanked all those who had helped her, including RSPCA Op Shop volunteers, the Animal Hearts leadership team, the State Library of Victoria and her family.

Emily is currently raising funds for Hair with Heart through the Variety Children’s Charity, cutting off more than 30cm of her hair to donate to wig creation and having raised $773 already towards the cause.

She also volunteers for several local organisations, including the Lions Club Charity Dinner and Heywood Rural Health, assisting with the activities in the aged care area.

About 50 people attended the Portland ceremony – held at the Civic Hall and with limited numbers due to the coronavirus pandemic restrictions – and were treated to musical entertainment by Ms Cook and Torri Lee Gunek, the latter singing the national anthem, while the Rotary Clubs of Portland and Portland Bay provided the breakfast and drinks.