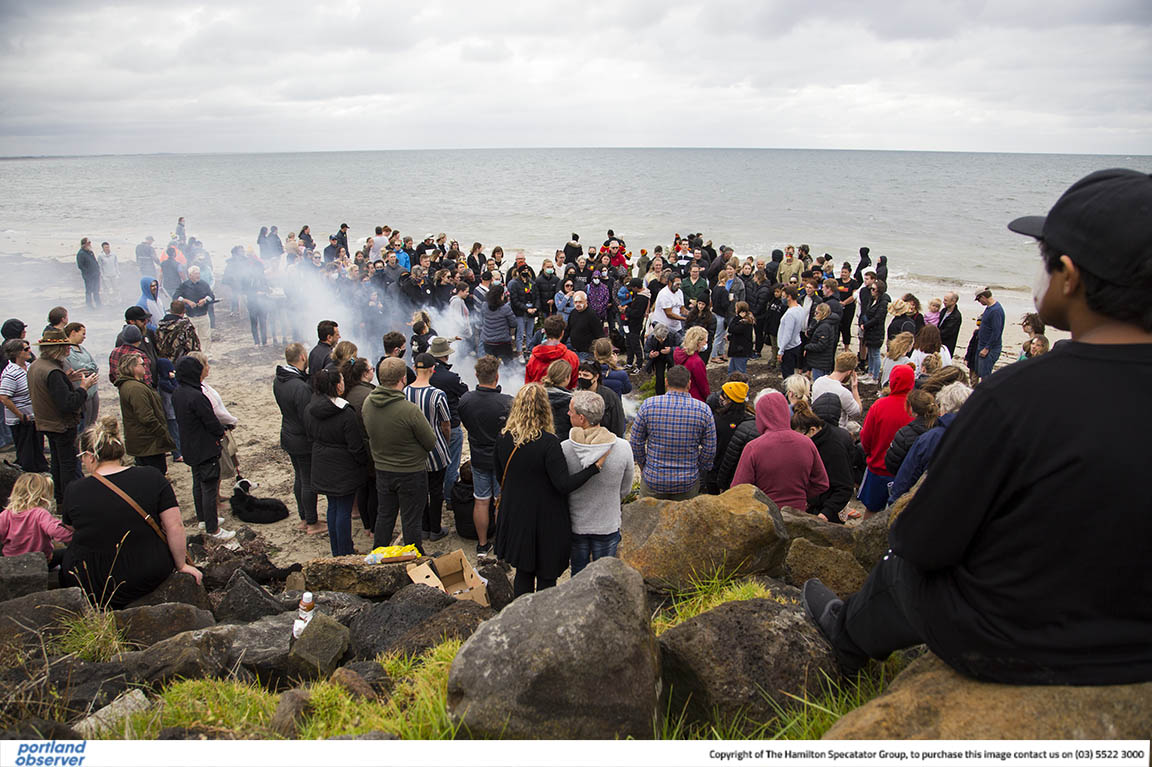 A SMALL Allestree beach was filled with people marking Invasion Day from 9am on Tuesday. Picture: LEESA COOK 210126LC23
By Angela McFeeters

TWO large commemoration events were held to mark January 26 on Tuesday, and organiser Chris Saunders was pleased at the wide range of community members who attended.

“I feel like it was a big representation of our community, both Indigenous and non-Indigenous, and we were surprised by how many people rocked up on the day: it was so good to see.”

Publicised as Invasion Day smoking ceremonies, the events helped remember the impacts of colonisation on the Gunditjmara people, including dispossession of land and culture.

Mr Saunders spoke, as did elders including Christine Saunders, Hilary Saunders and Kevin Clarke, and the Winda-Mara Dancers also performed some traditional dances.

“I loved seeing the representations of families there.

“That also changed my language as to what I was going to share on the day – in a positive way: I think it was a family-safe environment.”

Arrangements of native plants were placed on the water’s edge as a way of acknowledging and paying respects to Deen Maar, the creator spirit, “where our souls go after we pass: the gateway between the dreamtime and our physical world” (Deen Maar is more commonly known in the non-Indigenous community as Lady Julia Percy Island).

At the 11am event many of the flowers were given to elders, and conversations were started up among people that may not have happened otherwise.

“I met this one old fella named Eugene who was 91 years old.

“Eugene was an Irish immigrant and wanted to meet the elders that were present. It really resonated (with me): that interaction was probably one of the craziest of the day,” he said, adding that the interest and respect that he showed was heartening.

Mr Saunders encouraged people to think about what monuments such as the tribute to Victoria’s first ploughed field (opposite Portland District Health) meant to all community members and the story those monuments tell.

“Where is the representation of local Indigenous people?” he said.

“I would also encourage people to do your own research about our history as individuals and do not rely on Indigenous people to always provide answers.

“And at gatherings please consider representing the community in a way that includes Indigenous people.”

“I was completely unsure what to expect and I was welcomed by everyone very warmly and invited with open arms to join in on having the ochre marking and smoke display (smoking ceremony).”

Mr Fox said he learned a lot about the region’s our history from a different perspective and “could see and felt deeply the reasons our original inhabitants carry their pain and hurt.”

“I will attend again and would encourage everyone to go along as well.

“Learn for yourself firsthand and then make an informed choice for yourself: it would be incredible for this event to grow in size,” he added.