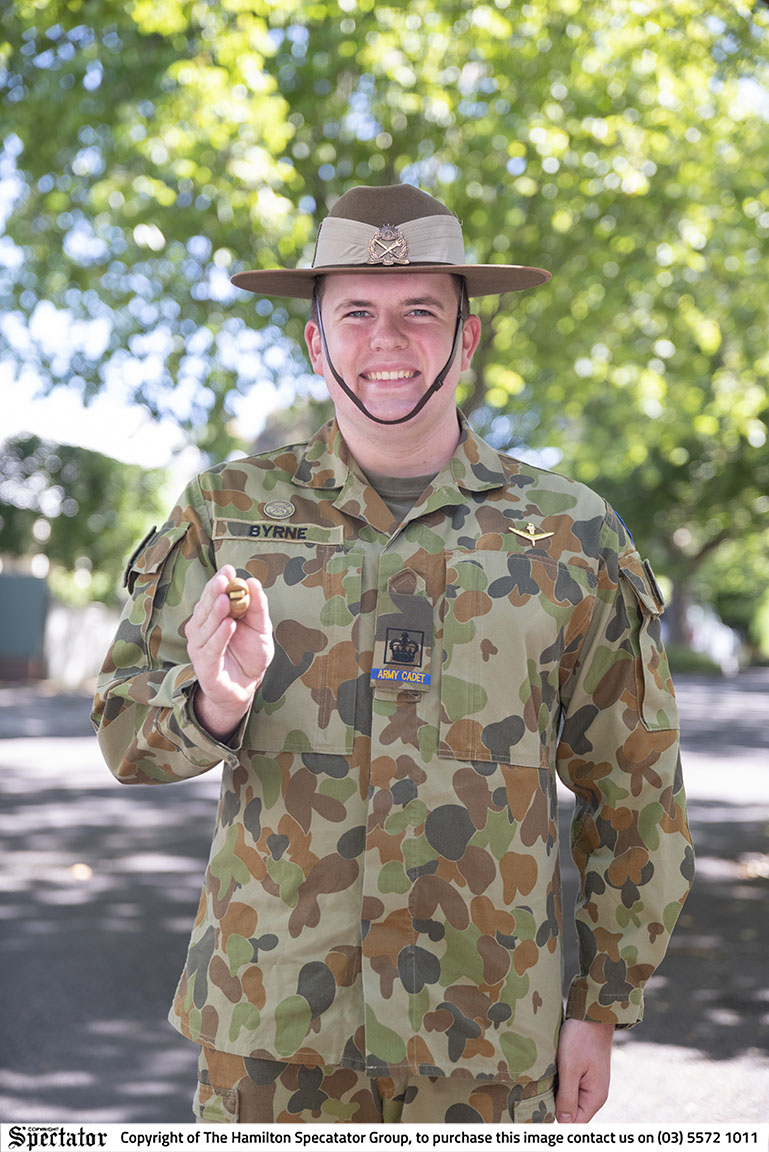 BAXTER Byrne of the Australian Army Cadets (AAC) has been newly appointed to the role of RSM, he will oversee all units in Western Victoria. Photo: LAUREN HAY.
By Blair Burns

HAMILTON’S Baxter Byrne of the Australian Army Cadets (AAC) has been newly appointed as Regimental Sergeant Major (RSM) for 32 Battalion, just before the opening of the new Hamilton Unit.

This new appointment gives him the responsibility of overseeing the Dress, Drill, and Bearing of all units in Western Victoria which is “quite a big area,” this includes Sunshine, Mildura, Stawell, Warrnambool, Werribee and of course, the new Hamilton unit.

He received the phone call to say his application was successful and was congratulated on his new appointment.

“I was just going about my day and I got the call, I was really pleased with the appointment as it is a big step up in my Australian Army Cadets career,” Baxter told The Spectator.

The former Hamilton and Alexandra College (THAC) student is excited to take on this role and also play a vital part in the new Hamilton Unit which he will be part of with his father, Lieutenant (AAC) Michael Byrne.

Whilst keeping an eye on the Hamilton Unit, he will also be required to check up regularly with all units within 32 Battalion, Victoria Brigade.

Baxter was previously the Company Sergeant Major (CSM) for 314ACU Warrnambool, which was at the unit level, he will be in a pretty similar role this year but with a much greater responsibility – now covering all units rather than just one.

“I was fortunate to be appointed the CSM at 305ACU, Surrey Hills in Melbourne and it was at 305ACU my career began seven years ago.”

“When my family relocated to Hamilton, I was pleased to be appointed to that same role at 314ACU Warrnambool,” he said.

“I’ll be responsible for Dress, Drill and Bearing standard which means a mentoring role to ensure the standards of the AAC and its Cadets meet the values and expectations of representing the Australian Army.”