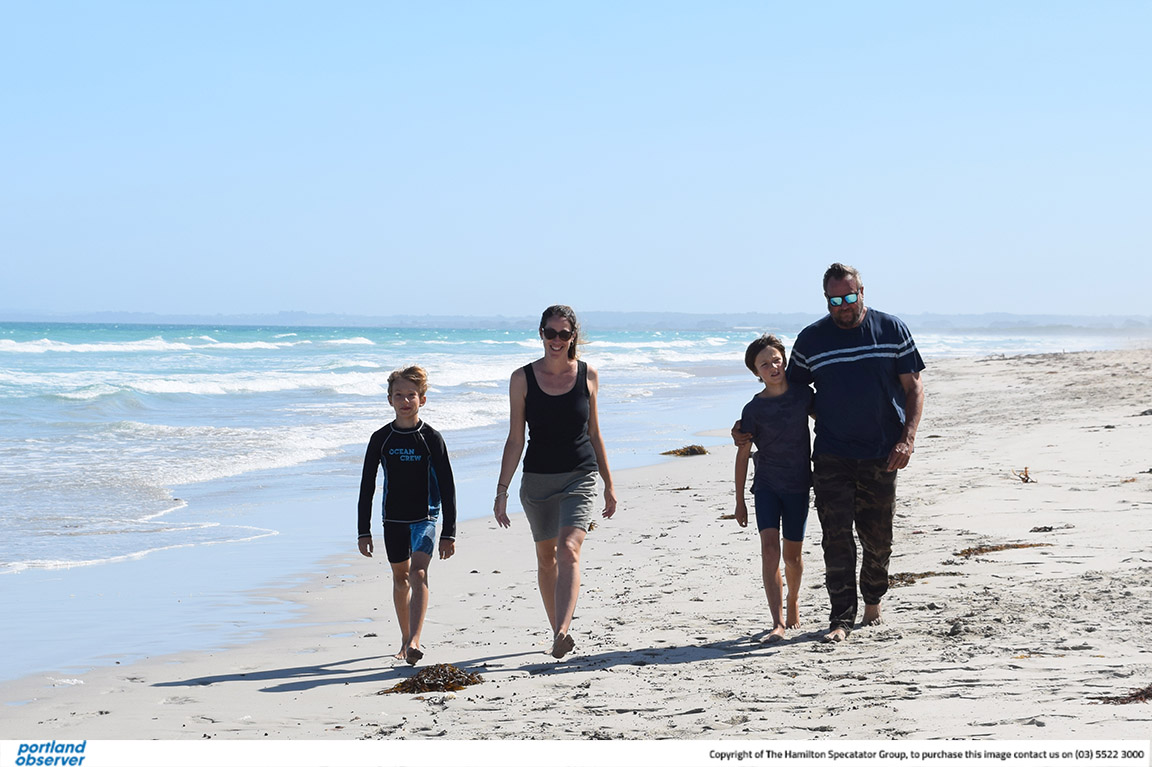 Tracy and Peter Botica with sons Cameron, 8, and Declan, 10, are delighted they moved to Narrawong last year and love their coastal-country lifestyle. Picture: OLIVIA COTTIER 200217OC05
By Allanah Sciberras

TRACY and Peter Botica keep pinching themselves that they live in such a wonderful place 10 months after they moved to Narrawong with their children.

The family shifted from regional inland New South Wales so they could enjoy a country life by the sea and are delighted to be living in a larger home with space around them to spread out.

That feeling of freedom was particularly special during Victoria’s long second lockdown last year – although of course they wouldn’t have been locked down for so long if they had remained in New South Wales.

Their sons have been able to choose a new pet – a guinea pig and a former racehorse were selected – and they can spend time on their 4.5 acre block or splashing or surfing at the beach when the weather is fine.

“It’s really a hobby farm – space for the kids to run around and get dirty,” Ms Botica said.

Dinner has often been a picnic at the beach this summer, and Mr Botica said the couple frequently look at each other and say, “we’ve so made the right move.”

They were able to move from the small community called Henty, north of Albury, in April because the couple could be flexible with their jobs.

Both their homes had good internet access, and Mr Botica was able to still manage his transport business, Camdec Logistics, from Narrawong after years of working in the industry from many locations across Australia.

They explored the Portland region as well as near Bairnsdale in eastern Victoria before Mr Botica found the perfect home come up for sale in Narrawong.

“I saw the house online, put in an offer subject to seeing it and it was accepted,” Mr Botica said.

Now Ms Botica has managed to help put Narrawong on the cover and inside pages of national magazine with her photography skills.

Seven further images of her family with pets and on the property are also published inside in a photo essay-type format that she loves.

The pictures scored her third and tenth prize in the Photographer of the Year – People - 2020 competition for the magazine.

A self-confessed fan of black and white images, Ms Botica enjoyed capturing moments where the family were spending time together or were with their beloved animals.

“I love real raw photography, not photos where everyone’s standing posed,” she said.

A professional photographer, she snapped her boys for a children’s fashion magazine in Italy and while it was a great experience, she laughs that she has decided to mainly stick with more spontaneous images in the future.

Declan and their other son Cameron, 8, are now enjoying their chance to get back into team sport by playing soccer, and the couple are also looking forward to meeting more people now that the region slowly opening up again.