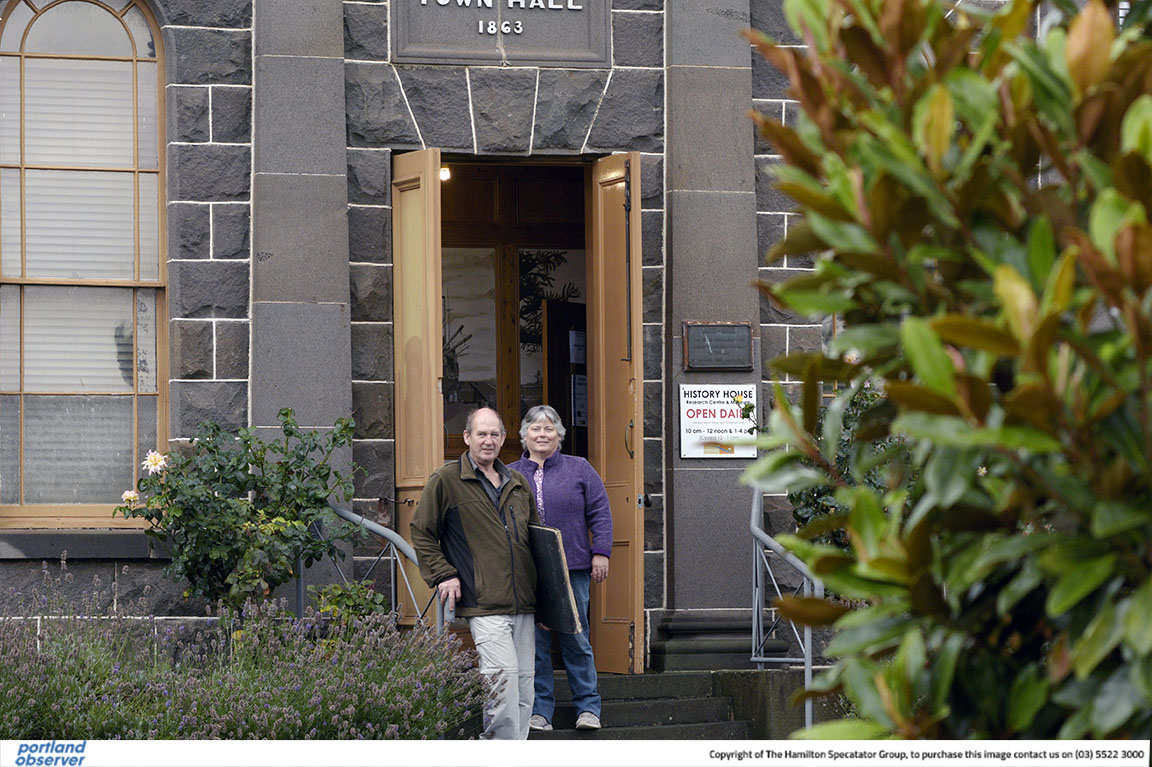 MARTIN and Helen Boyer are pleased to be able to welcome visitors back to the Portland Family History Group’s home, History House. Picture: KAREN HODGE 210307KH05
By Angela McFeeters

The distinctive bluestone former town hall at 95 Cliff St – in the Memorial Triangle precinct next to Glenelg Shire Council’s office – is the home of the Portland Family History Group.

It is also staffed five days a week by volunteers who have a passion for information-sharing and knowledge about Portland and surrounds as well as its people.

Mr Boyer said he first visited the museum two years ago to learn more about his family tree, then joined as a volunteer so he could help digitise their photo collection and therefore reduce clutter in the small building.

Both quests are continuing, and while Mr Boyer didn’t seek to become president when the call for help was made, he said he was happy to assist the group and prevent the valued community asset from closing.

He and others are installing a second-hand compactus (sliding shelf storage system) with additional shelving at the centre soon.

Many people visit History House to delve into the detailed local records that are publicly available, as well as browsing through bound back-copies of the Portland Observer.

They often find fascinating tidbits about their family history there, or clues about where to look further.

Mr Boyer started looking into the life of the first-known Boyer to arrive in Australia that he is related to, and is continuing his quest for information two years after entering History House.

His great great grandfather Louis Robert Boyer from Trinidad had a creole background, and married Portland’s Silome Donehue in 1867.

He had arrived in Australia as a tap-dancing specialist but didn’t appear to have any entry or exit pass for Australia.

His quest to start up a dance studio in Portland didn’t succeed, so he moved to Hamilton, had a son born in Penshurst and could have been living in Casterton – although the latter is hearsay rather than evidence-based.

“It’s like trying to find a needle in a haystack,”

The Donehues had arrived in Portland soon after 1851 and have a connection to a building on the site of the former Narrawong General Store.

Until recently the Boyers lived in Narrawong themselves, and they continue to farm some land there.

Now Mr and Mrs Boyer are happy to help out at History House at least every Monday; the service is staffed by about 14 volunteers for full or half-days from Thursday to Monday every week excluding on Good Friday and Christmas Day.

Mr Boyer said the group welcomes new volunteers for a variety of roles such as digitising historic materials, cataloguing items and interpreting hand-written histories, typing them into computers.

Some recent acquisitions include health insurance records from people working in the forestry industry as well as chemist records from the 1800s.

History House is open 10am to 12noon then 1pm to 4pm on their scheduled open days; there is a small cost for entry.