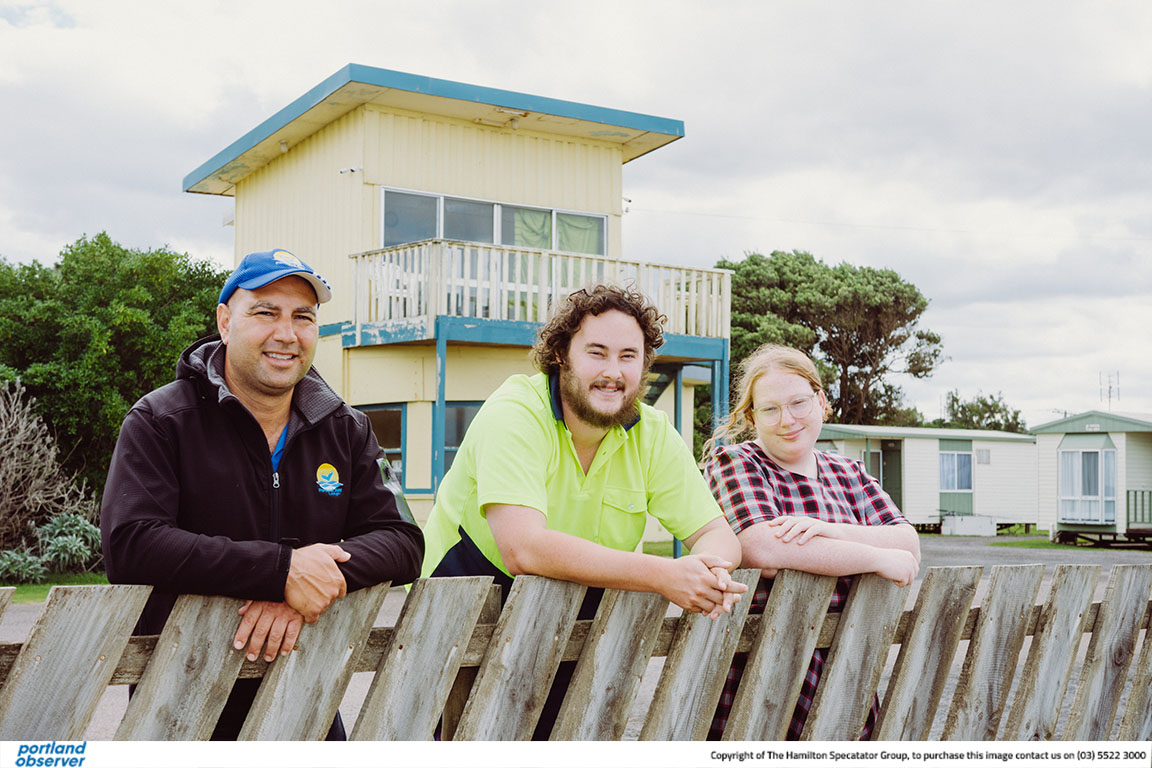 PORTLAND Beach Holiday Park might not be a familiar name (yet) but it’s literally a new spin on one of the district’s long-established accommodation providers.

It is the new name for the Dutton Way Caravan Park, which just before Christmas was bought by business partners Dean Beckman and Michael Grech.

Mr Beckman is a familiar figure along Dutton Way (and Portland as well), also operating the Portland Bay Lodge at the other end of the drive along the waterfront at Allestree.

And he hopes to turn a local institution, which has had two long spells of ownership by different families, into something with a more modern face.

“(Mr Grech) owns a financial business and has a lot of people wanting to move to Portland,” Mr Beckman said.

“He asked me ‘is there anything to purchase down there we can help with’ and that’s how it came about.”

Shortly after managers Corey Williams and Issy Frost were hired to manage the property.

Mr Beckman said the first aim had been to deal with the busiest time of year tourist wise.

“We got thrown in the deep end just before Christmas, we could have sold out 50 times over, but if you can (manage) those periods the rest is a breeze,” he said.

An upgrade of the facilities has begun, and Mr Beckman said the aim was to make it more interactive with customers.

“One of the things the place doesn’t have is a camp kitchen, games room and somewhere for campers to go,” Mr Beckman said.

“Our vision is to be the friendliest caravan park in Portland.”

The park is home to a number of long-term residents who have a part to play with that.

“When we spoke to them we said that when holidaymakers came we wanted people to feel what a great community this is and want to come back and experience that again,” Mr Beckman said.

“Corey and Issy have been very nice and welcoming.”

Mr Williams has long experience in the accommodation industry, his family owning the Victoria Lodge Motor Inn on Percy St.

He also knows first-hand the needs of tourists having worked at the Visitor Information Centre in Portland for five years.

“Issy and I were talking about it, we were planning to do something on these lines and saw Dean was keen on it.

“We’re very similar to Dean in that we wanted to make sure it was the friendliest place, and we want to see more vans and people in general pulling in.”

Mr Williams said the park had been busy even after the peak of the holiday season.

“There’s a good balance here between long-termers and tourists as well,” he said.

Ms Frost said there were other groups she wanted to see at the park.

“We’re really trying to bring in families and be a place where families go to spend special occasions,” she said.

And others too. Mr Beckman has a keen sense of the history of Dutton Way, particularly with his work with the Portland Beach Safety and Restoration Alliance which is working on an alternative to the sea wall that would bring back the beach.

“We’d like to take (the caravan park) back to its former glory,” he said.

“Everyone always talks about it was the place to go to get food, a hot drink and ice cream once, but we’ve got a fair bit of work to go to get it to that.”

He also wanted to get some more cabins in to the park – at present there are nine, with 41 camp sites.

And, as with the beach plan, there’s an element of safety Mr Beckman would like addressed – making it safer for visitors to cross the road from the park to the sea wall and water in what is an 80km/h zone, having seen plenty of near misses.