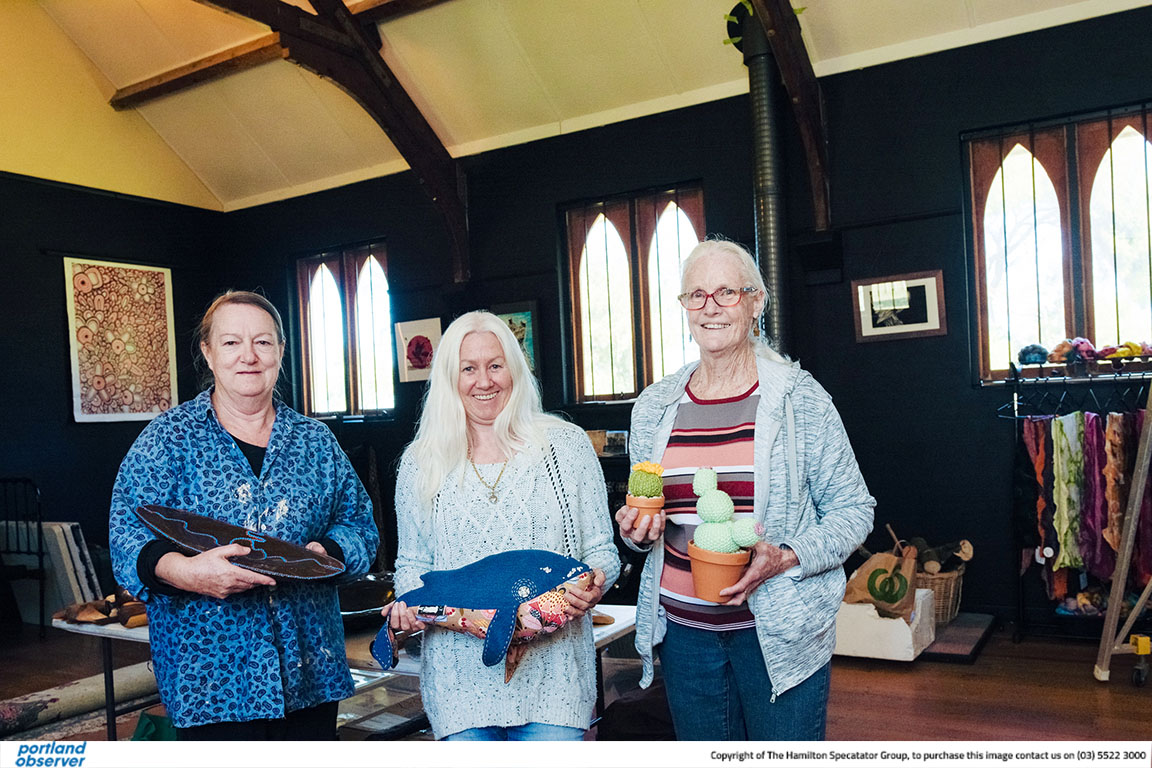 DEB Saunders (left) is excited that Two Rivers Gallery launched at Tyrendarra yesterday. She was photographed on Monday with other volunteers that will staff the gallery. and was holding a wooden bowl produced by Leon Walker from Heywood. With her is Sharryn Wyllie with a whale made by Annie Hegarty from Warrnambool, and Sue Miller with some of her own light-hearted cactus collection. Picture: KAREN HODGE 210329KH09
By Angela McFeeters

Two Rivers Gallery has opened at the former Methodist Church and secondhand goods retailer on the Princes Hwy, near the busy intersection with Tyrendarra-Ettrick Rd.

At least six of the artists creating the pieces are Indigenous, and all artists live within 100km of Tyrendarra.

The gallery is a long-held dream of art advocate and gallery project manager Deb Saunders, who was a founding member of the South West Alternative Medium Project (SWAMP Incorporated) in 2010 and SWAMP is continuing to welcome people to catch-ups every Tuesday.

SWAMP is a not-for-profit community arts organisation that operated out of Portland locations until the end of 2018, providing opportunities for people to work on creative pieces in textiles before it was shifted to the current site early in 2019 after a NSW-based arts benefactor - who wants to remain anonymous - bought the building.

SWAMP meets will now be focused on people who do their own hand-sewing and knitting projects rather than using sewing machines, Ms Saunders said.

Sue Miller came to SWAMP through the Work for the Dole program, and said she was grateful it that allowed her to reconnect to the community.

She has produced some bright knitted cacti for the launch, and has signed up as a volunteer to help operate the gallery alongside with others such as Sharyn Wyllie.

As for Ms Saunders, she said the addition of the gallery to SWAMP’s space would keep her out of trouble and was, “a natural progression.”

“Coronavirus gave me the time to think about what I want to focus on, and I also spent last year painting the inside of the building black: it’s been great.”

Three of the Indigenous artists have exhibited in the winter arts exhibitions in Portland and Narrawong, however Ms Saunders said they had found it hard to find a space to have a longer-term exhibition, so it was wonderful to have been gifted the building by their “great supporter.”

All the gallery’s items are for sale, with prices currently ranging between 50c and $600.

It is currently being staffed by volunteers, with Ms Saunders a volunteer herself; pieces are being sold on commission.

It is open Thursday to Sunday from 10am to 4pm, including this long weekend.

For more information about the gallery and to enquire about using the facility, contact 0410 745 770 swamptyrendarra@gmail.com.