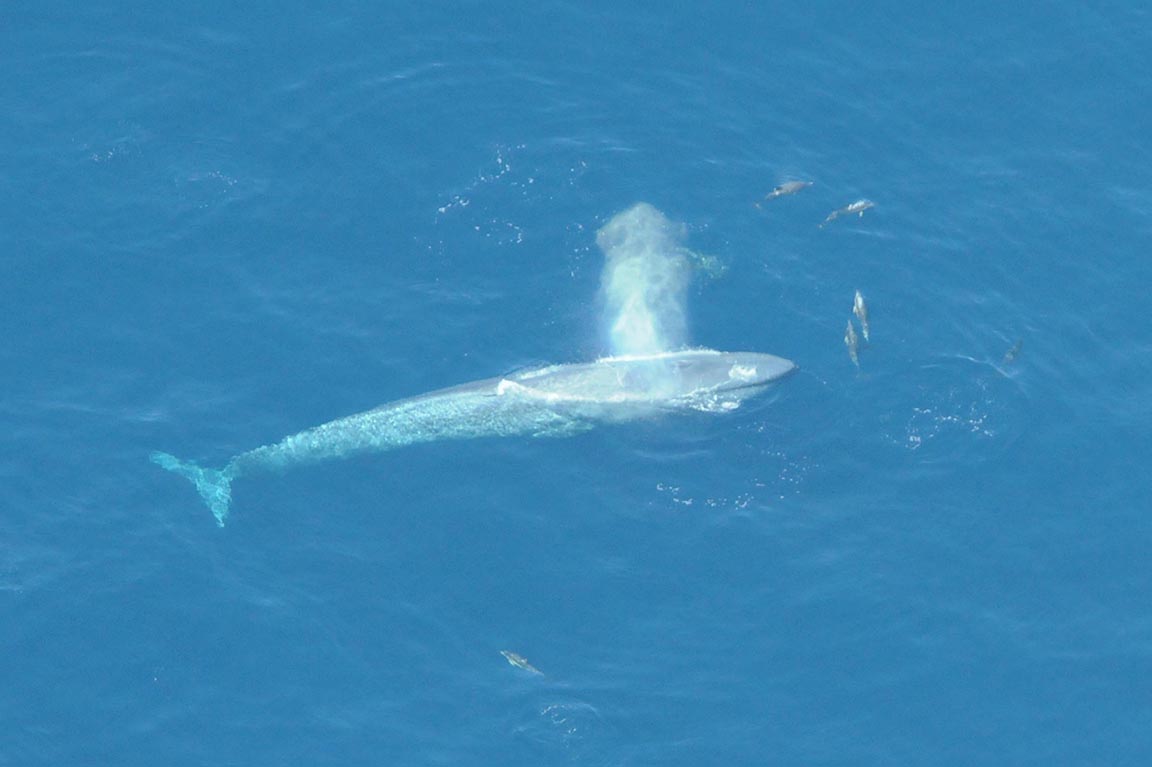 DR PETER Gill was delighted to have been able to identify 22 blue whales in the region last week, with one of them pictured here alongside some dolphins. Picture: DR PETER GILL
By Angela McFeeters

A LEADING blue whale researcher is delighted to have found 22 of the ocean’s giants in the region, up from just two sightings last year.

Dr Peter Gill from The Blue Whale Study led an aerial survey of the continental shelf off south-west Victoria and south-east South Australia last week and said the results were “very encouraging.”

Dr Gill is a senior research scientist who lives at Tyrendarra and has been keeping tabs on pygmy blue whales for a number of years.

He said the whales migrate to coastal waters off Victoria’s south-west to feed on swarms of krill, which are nourished by the bonney upwelling, a cold water upwelling that brings enormous amounts of nutrients into these coastal waters.

The upwelling system provides nutrients that also support local fisheries and a diversity of marine wildlife.

“For a number of years blue whales have been hard to find in our local waters following a decade or more when whales and krill swarms were fairly abundant,” he added.

“It was reassuring to see the huge beasts foraging for krill across a large swathe of their upwelling habitat (last) week.”

The bonney upwelling varies in timing and intensity each year, being driven by south-east winds which in turn are influenced by large-scale climate patterns including climate change.

“For a number of years krill appears to have been in low abundance,” Dr Gill said.

“This has also been reported to us by squid and lobster fishers, and when krill is in short supply, blue whales must search elsewhere for their food. If krill is hard to find, this can have potentially serious effects on the whales’ health and reproductive rate.

“As an example of a poor blue whale season, we did an identical survey in March 2020 and found only two blue whales, both of them travelling steadily away from the areas where we have just found them.”

“The healthy numbers we have just seen during our survey may be related to the La Niña climate pattern eastern Australia is now experiencing. We will have to see what happens next year when La Niña has ended.”

The Blue Whale Study is a local not-for-profit research and education organisation that has been studying the ecology of blue whales off southern Australia since 1998.