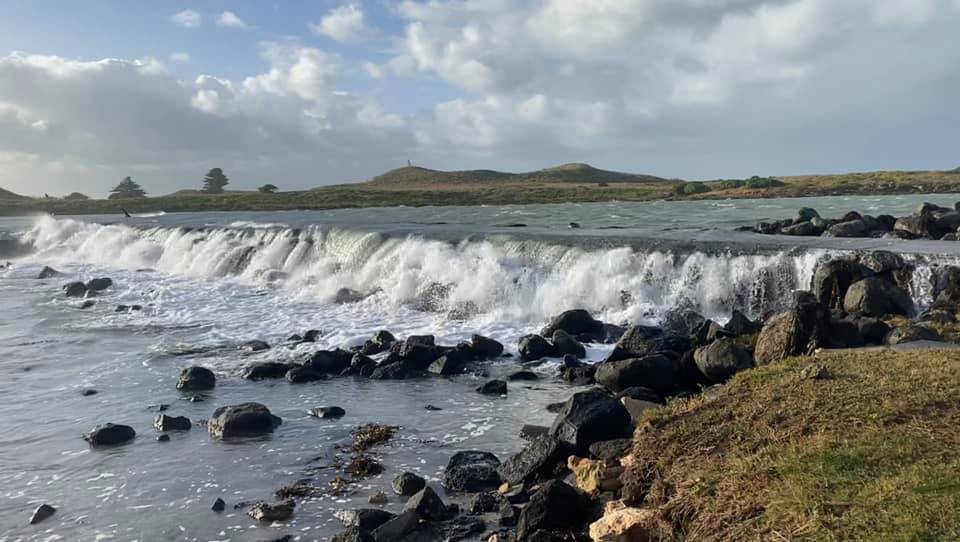 A BALLARAT family was trapped on Griffiths Island for several hours on Sunday after the causeway was covered by large swells. Photo: SES PORT FAIRY UNIT/FACEBOOK.
By Ash Bolt

A BALLARAT family has a unique story from their Port Fairy holiday after becoming trapped on Griffiths Island due to the wild weather on Sunday.

The Port Fairy SES unit, emergency services and Moyne Shire officers were called in to assist about 10.45am after the family became trapped on the island when waves crashed over the causeway.

Port Fairy SES unit controller, Stephen McDowell said the family did the “smart thing” to wait for help rather once the causeway became submerged.

“The sea was pretty large with the swell (on Sunday) and with the tide coming in, it began overtopping the causeway, which is the only access to the island,” he said.

“The family – two parents and two young children – had gone across to the island and when they tried to come back 20 minutes later, the swell has come over.

“They’ve done the smart thing with their young kids and decided to wait instead of trying to walk through the water, which is really dangerous.”

Mr McDowell said a Triple Zero (000) from someone on the Port Fairy side of the causeway alerted emergency services to the situation and led to Port Fairy marine rescue vessel being launched.

“We launched the vessel with some SES volunteers on it and docked on the island,” he said.

“The volunteers were able to get onto the island and talk to the family, get them onto the vessel and back to the marine rescue base.

“The family was safe and well and able to return to their Port Fairy holiday.”

However Mr McDowell said emergency services were left disappointed after a separate group of three people – including a child – walked across the causeway despite the conditions.