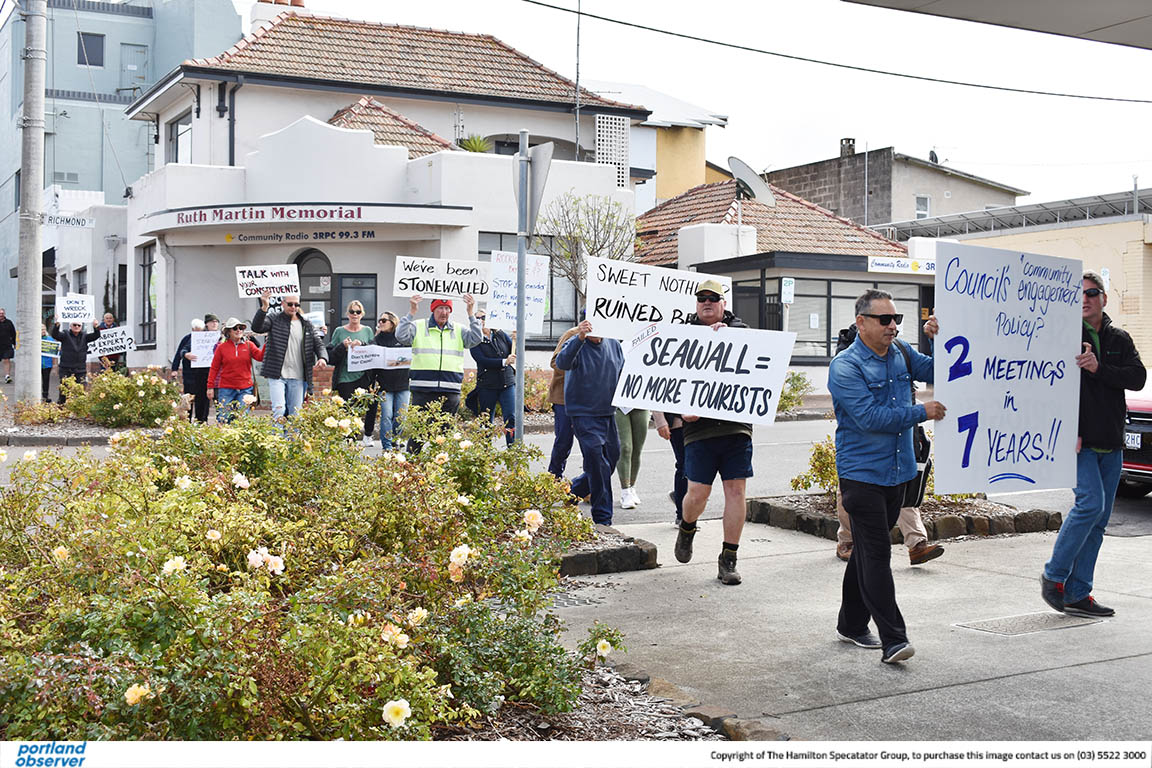 PORTLAND was the site of a rare street protest on Wednesday when about 30 Cape Bridgewater residents opposed to the building of a rock wall on the foreshore marched through the city’s CBD from the Market Street Reserve to the Glenelg Shire Council office chanting “Save Bridgey beach – no rock wall”. Picture: CHALPAT SONTI 210414cs01
By Chalpat Sonti

THE battle over whether or not a rock wall should be built at Bridgewater Bay beach is no closer to being resolved following a week of legal letters, meetings and a public rally by opponents of the project.

Cape Bridgewater residents opposed to the wall have sent various ultimatums to Glenelg Shire Council demanding work be stopped on the 410m wall until their concerns are addressed, but the council says it still plans to go ahead on the project on Monday.

Doug Cahill of the Bridgewater Seawall Alliance said the council had until noon today to agree to an “independent expert” (one sourced by objectors) to liaise with project engineer Watertech.

“We will pay for that and what we’re asking for is to hold off on everything for 4-6 weeks while we obtain our own independent expert’s report on what is the effect of this rock wall,” Mr Cahill said.

“Our expert will work with theirs. It’s only a simple request (but) we are still unsatisfied with the answers we’ve got and the information we’ve been given.”

Sandy Fairthorne, another Alliance member, said the independent expert’s recommendations would be binding.

“If they say this wall will work I’m happy to let it go,” she said.

“But we should get another opinion.”

Should the council not agree to their request, objectors would seek an injunction to stop the $2.25 million project from starting as scheduled, Mr Cahill said.

Mr Cahill said the request was initially contained in an email sent by his cousin, Bendigo lawyer Peter Cahill, to the project manager at the council last Friday, with a deadline of 4pm Wednesday, but both Mayor Anita Rank and chief executive Greg Burgoyne said they were unaware of it, or any deadline.

“Whether they communicated with the CEO or project manager I don’t know but I haven’t been presented with a list of demands,” Cr Rank said.

“(But) those demands sound similar to what we talked about on Tuesday (see below), but not with that timeline in place.”

The Observer has seen that letter, which threatens proceedings in the Victorian Civil and Administrative Tribunal or Supreme Court if the council does not hold community consultation and addressing engineering concerns previously raised, though it doesn’t refer to an independent expert.

Following enquiries by the Observer, another email was sent again yesterday, with the deadline pushed back to noon today.

A letter delivered to Mr Burgoyne on Tuesday night by Mr Cahill calls for several documents to be produced, otherwise the Bridgewater Seawall Alliance would seek an injunction

That was at a hastily-arranged meeting between residents and the council on Tuesday night – where attendees included Cr Rank, Mr Burgoyne and project engineer John Gater of Watertech.

That gathering attracted more than 30 residents, despite only being organised earlier that day.

The council agreed to provide a 3D model of the project, as well as some other documents including permits, to the residents by today.

Cr Rank said “I think it was fair to say their concerns were around the dynamic rock wall and ensuring that they don’t lose the beach or that the beach is not impacted”.

“I’m hoping that they’ve been reassured that the loss of the beach is a separate issue to reinstating the rock wall that is there.

“We’re not creating a new rock wall, we’re reinstating one that has deteriorated there over time.

“Maybe erosion is not getting worse because there is a rock wall there that is trying to do its best to protect it but at some stage it will need to be replaced.”

The rationale behind the project is also to protect the infrastructure built during the second stage of the foreshore works, due to begin later this year.

Cr Rank said while the project engineers gave the community assurances as to liability if something did go wrong “we’re dealing with the environment”.

“The engineering is based on the best of our knowledge,” she said.

The Observer asked Mr Gater several questions relating to the objectors’ technical concerns, but after initially agreeing to answer them he did not respond by deadline.

The Observer also asked the council for an image of the seawall as it is expected to look when finished but was informed this would not be available until today.

About 30 Cape Bridgewater residents took to the streets of Portland on Wednesday afternoon in a rare sight in the CBD, marching from the Market Street Reserve to the Glenelg Shire Council office while chanting “Save Bridgey beach – no rock wall”.

They continued to chant inside the council office, but with no one coming out to meet them they then dispersed.

Mr Cahill and Ms Fairthorne said they were happy with the turnout.