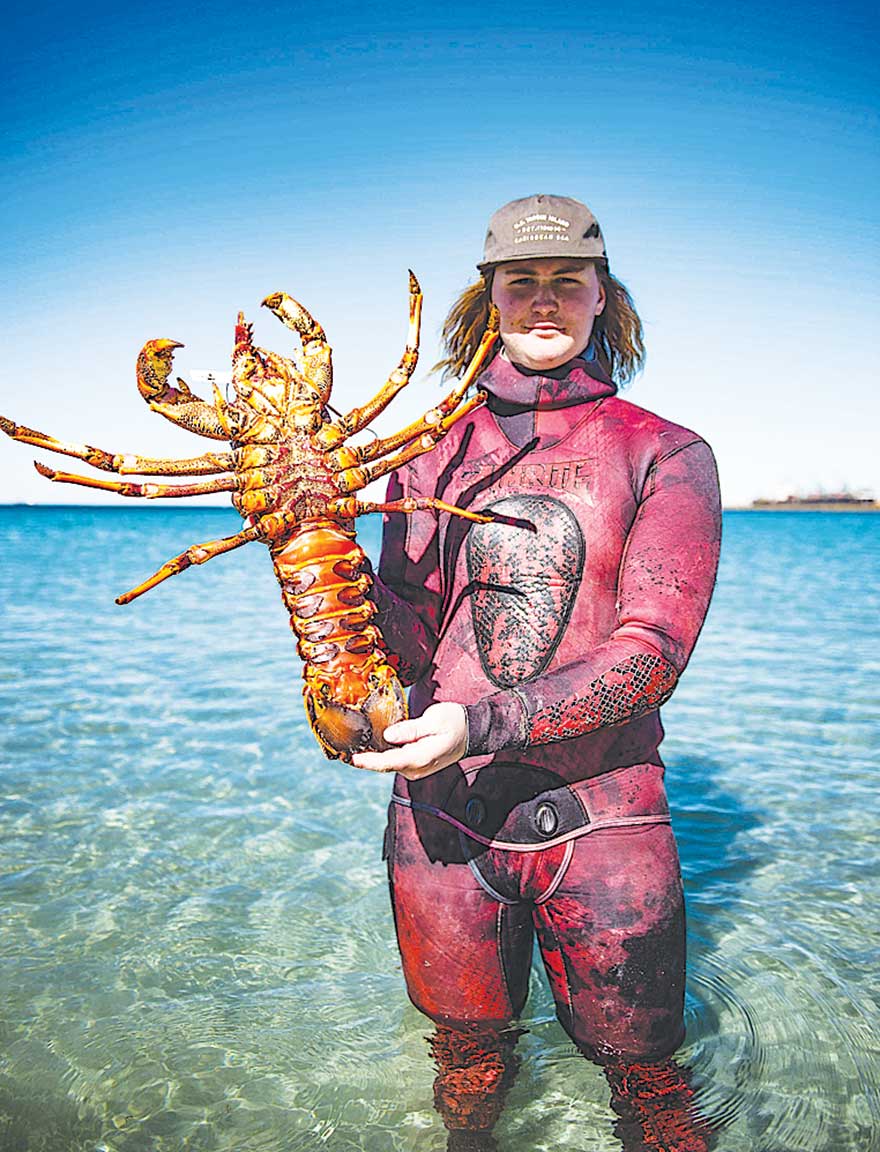 AARON Edmonds caught a southern rock lobster by hand recently, thankful his friend was nearby at the time because his leg cramped up while he was still underwater. Picture: SUPPLIED
By Angela McFeeters

AARON Edmonds is the first diver in his family, and he appears to have been made to live and work in and on the water.

The 17-year-old Portland teen said he loves swimming with, seeing – and eating - fish, loves the ocean, and also loves pushing himself to do better.

“That’s where I get my drive.”

He started breaking records for spearfishing southern bluefin tuna from in the water on December 29, catching a 16.5kg fish at Point Lonsdale after becoming entranced by a vortex of the fish circling the boat he had just jumped out of.

“It’s breathtaking,” Aaron said recently when reflecting on the day that peaked when he was out with renowned spearfisherman James Beckman in 26m-deep water.

“I put a shot through, and it held the fish.”

His next moves were a little uncertain given it was his first tuna catch, and he feared attracting sharks momentarily with the blood that was left in the water, but he managed to haul the fish on board the boat and get it weighed and measured the right way so he could claim the record, which can now be seen on the Australian Underwater Federation’s website.

Aaron has gone on to catch a record-compliant 20.1kg and then a 20.63kg southern bluefin at locations east of Portland this year.

He has also caught a 30kg fish, but he regrets that the spear and float lines weren’t set by him, so it wouldn’t technically qualify as a record.

The records have topped off a strong couple of years after he discovered freediving – or diving without an air tank - and spearfishing when he was 15 years old.

“I was inspired by my best mate Jayme Cannon: we’re so competitive, and he’s awesome,” Aaron said.

“Freediving was the first sport I’d been good at: it’s relaxing, somewhere you can go that you can escape,” he said.

“The sounds of the outside world and the stress goes over the top of your head, and you feel free.”

“It’s the only way that I know how to relieve stress – although I enjoy the photography, and filming side of it too.”

He has managed to dive with sharks and shoot coral trout in Vanuatu as well as explore plenty of Victorian waters.

A few weeks ago he caught his fourth 4kg southern rock lobster (cray) by hand while freediving.

The latest catch was off the coast of Portland, while others have been in South Australia and elsewhere in Victoria.

Nevertheless he believes they are record-breakers because of his age and because there’s no junior record as far as he’s aware.

“I didn’t use a loop or spear,” he said, adding that the lobster had also been measured along their carapace (head) to help determine their size.

The latest haul could have turned out quite differently if it wasn’t for the support of Mr Beckman.

“I wouldn’t have landed it without the help of my dive buddy James,” he added, noting that it’s always important to have a good support team behind you in case you get in trouble by getting into a tight spot, become entangled in fishing line or seaweed, or lose focus from the surprise or fear of seeing a shark.

“James pulled me out backwards as I was ankle deep in the ledge and cramped up as I caught the cray.

“I couldn’t swim to the surface: James had to swim me back to the boat: your buddy’s everything.”

That cray is going to be preserved through taxidermy, but ordinarily Aaron thrives on eating what he catches.

“Everyone in my family knows me as the crayfish kid and they’re pretty happy because they get seafood,” he said.

“My nan had to buy a bigger cooking pot because I was bringing home so many.”

He also loves eating tuna in many different forms, for example, as sashimi, smoked in a barbecue or as tataki, seared lightly and served with onion, other vegetables and a special sauce.

“It’s cooked on the outside but not inside - beautiful.”

“I had sashimi with one of my record catches.

“The best meal I’ve ever eaten was with two of the best spear fishermen in Australia, Sam Clothier and James (Beckman): I was in a food coma, and the fish melts in your mouth.”