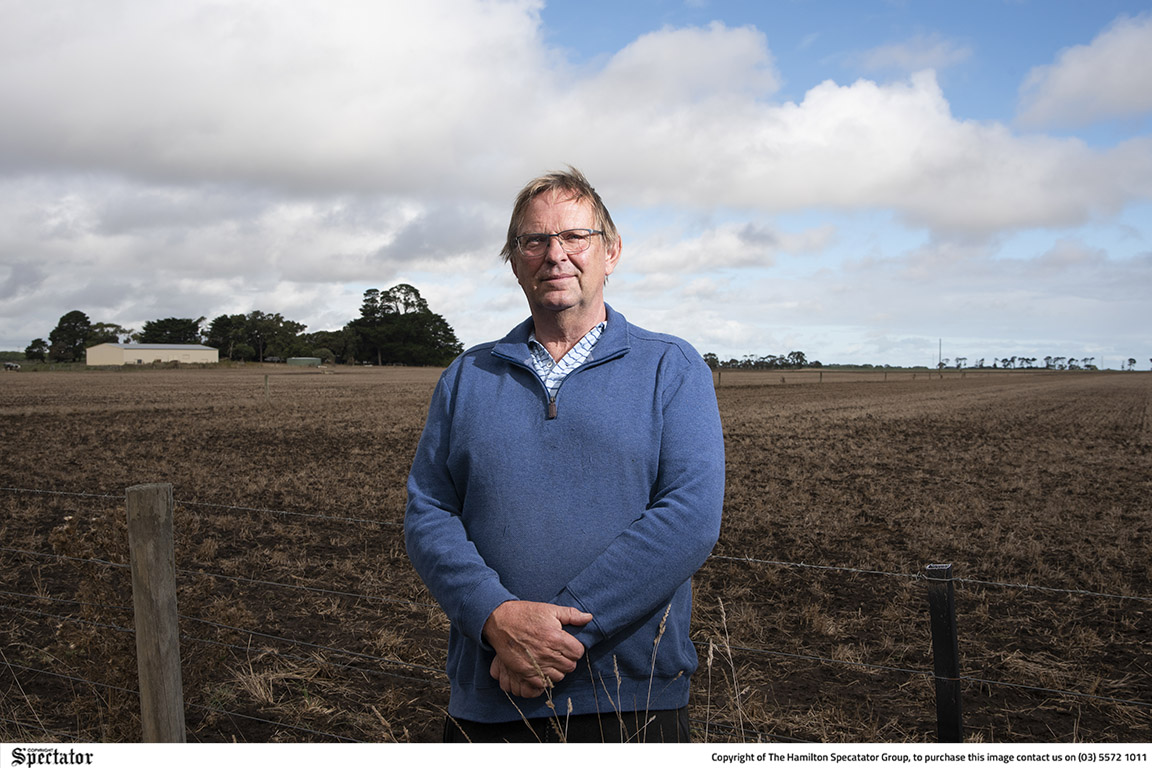 THE People of the Small Town of Hawkesdale Incorporated member, John Bos is ready to fight to have GPG’s wind farm permit revoked. Photo: LAUREN HAY.
By Ash Bolt

THE fear their hometown will fade away if a nearby wind farm goes ahead has pushed members of the Hawkesdale community to take their fight to the Supreme Court.

The association consisting of around 25 members, the People of the Small Town of Hawkesdale Incorporated, filed legal proceedings against the proponent of the Hawkesdale Wind Farm, Global Power Generation (GPG), and state planning minister, Richard Wynne, in February to have the wind farm’s planning permit revoked.

The association is arguing the planning minister’s decisions to amend GPG’s planning permit in 2017 and extend it in November last year were not valid because GPG was not the “owner or occupier” of the land covered by the permit, in line with the requirements of the Planning and Environment Act.

GPG’s permit would have expired on August 29 last year if not for the extension.

The People of the Small Town of Hawkesdale Incorporated member, John Bos said the association was fighting to have the wind farm’s permit revoked because it was concerned it was too close to Hawkesdale and would stifle any future growth of the town.

The current permit allows for 23 180-metre-tall wind turbines at the Hawkesdale Wind Farm, with the closest set around one kilometre from the nearest property.

Mr Bos said it was concerning that GPG had not been required to study the social and economic impacts its wind farm would have on the Hawkesdale community as part of its permit application process.

“My wife and I have been here for 30 years … I can see what’s going to happen.

“No one wants to have these 180-metre-tall turbines right next to them, so that’s going to affect property values.

“Once property values drop, people are going to leave and anyone new will only come here because it’s a cheap place to live.

“We’ll lose that sense of community that we have here – for example, the pool here in Hawkesdale is the only one in the shire run by volunteers, but that’s not going to last if people are leaving because of the wind farm.

“That sense of community is going to slowly fade, and once that’s gone, Hawkesdale is doomed.

“They’ve never studied it but we can see it – Hawkesdale will go the way other small towns in the shire have.

“All I want is that when I retire, I am able to go into town and buy milk and bread, fill up my car, go to the pub, and watch a footy match or watch the kids play tennis … slowly but surely those things are disintegrating.”

Mr Bos said the wind farm would also stifle future development and expansion of the town, which was a key component to the wind farm commissioner’s recommendation that wind farms be set back at least five kilometres from town boundaries.

He said the south of the town was the natural place for any future development, but the presence of the wind farm would make it almost impossible to get a permit to build a house.

“Development is being stifled,” he said.