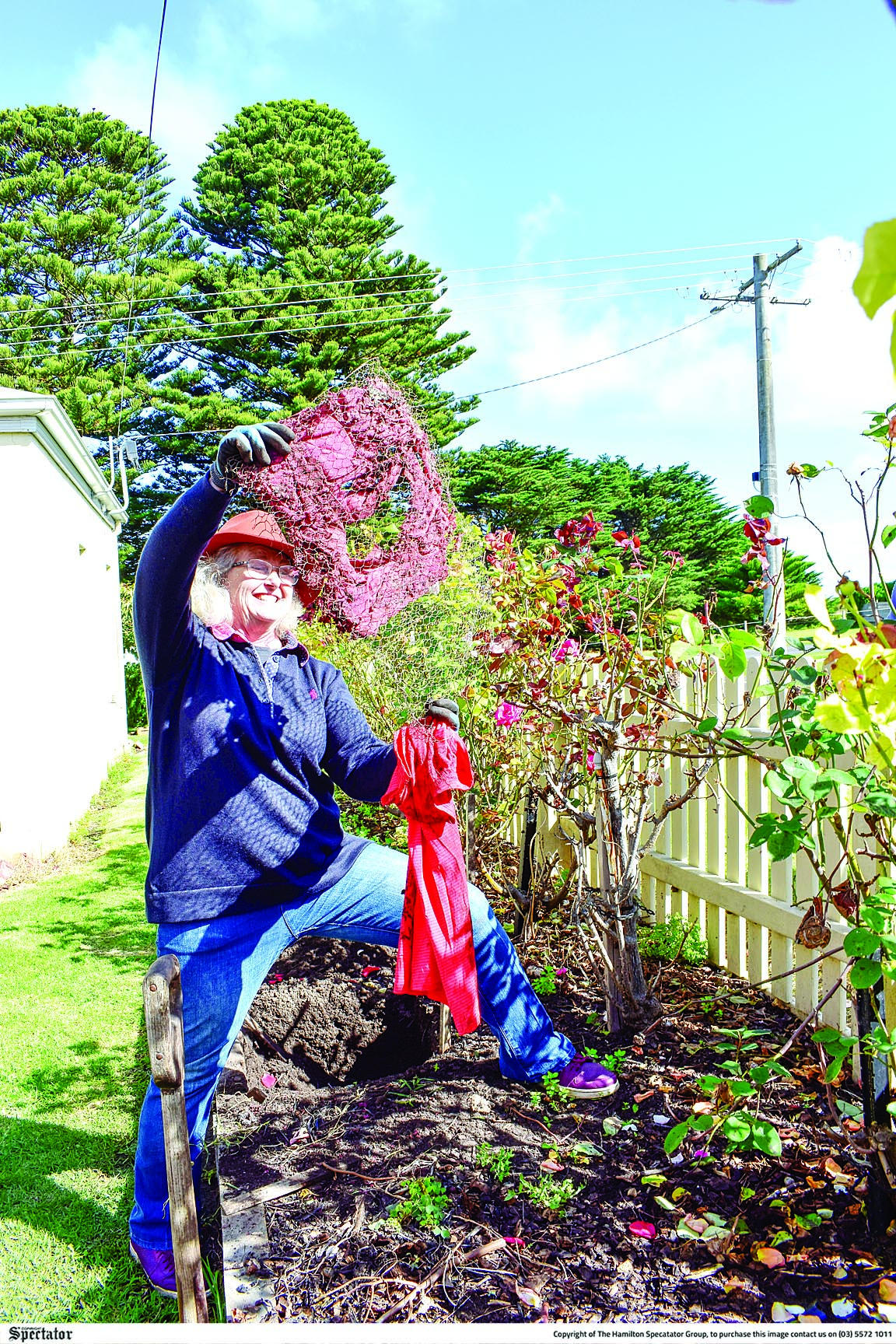 IT’S been a nerve-wracking experience trying to organise a gathering of rural women during these COVID-19 times, but good luck has prevailed and the Port Fairy Women on Farms Gathering (WOFG) has been labelled a huge success by attendees.

Chairperson, Lorraine Ermacora said her committee stayed the course with the planning and hoped for the best.

She explained numbers were less than had been hoped for, but given the complications and uncertainty around COVID-19, they were happy with the response.

In a stroke of luck, Victorian premier Dan Andrews relaxed COVID-19 precautions as of 6pm as the Friday night function was due to commence.

As part of the theme of ‘Women for all seasons,’ and reuse, repurpose and recycle – the two jumpers (one pure wool and one acrylic) which were buried on September 26, 2020, were exhumed.

WOFG secretary, Susan Rowbottom removed the jumpers that had been sandwiched between layers of wire netting.

After six months in the soil the woollen jumper had significantly decomposed, yet the acrylic jumper was dirty but remained completely intact.

The jumpers were presented to the audience on Friday evening, showing the importance of making good clothing choices now and the impact these decisions had on the environment going forward.

Australian Wool Innovations’ Marius Cuming witnessed the unearthing and recorded a podcast of the event.

Around 100 women attend over the weekend – hearing from guest speakers from many areas of rural life.

Janet Moxey of Moxey Farms spoke about how her late husband’s vision had been fulfilled as they had taken their farm from 20 cows to multiple farms and thousands of cows.

The enterprise which started over 100 years ago, is now an international concern and serves the local community well.

She explained how family members were still instrumental in the everyday running of their dairy operation – which milks three times a day.

Kirsten Diprose – a former ABC journalist was adamant that living rurally should not be a barrier to career success.

While acknowledging the drawbacks of dodgy rural internet and mobile service – she believed that tenacity of rural women – developed from an attitude of ‘just doing what needs to be done,’- would see us lead with less fear and more resolution.

She described her initial anxiety of leaving the city for the country and although her career had taken a new path (all while living in Caramut and raising a family with two young children) it can be extremely rewarding.

Anne McGrath had the crowd in fits of laughter as she described her years of horse training, dairy farming and being a clerk of the course at Warrnambool Racing Club.

During all that laughter, Anne still had a very important message to impart – about workplace safety.

She is a force to be reckoned with, and it’s just as well – as she has been seriously tested on so many levels.

Now there is a woman who should write a book.

Doreen Sumner has many facets - she is a wife, mother, former nurse and Koori Youth worker, and very proud Gunditjmara activist.

Doreen spoke about being the only aboriginal student in her primary school and belonging to the stolen generation.

She spoke of the difficulties of racial inequality and also of the lack of understanding of Aboriginal culture.

Doreen said she would like to see a true representation of our shared history taught in schools to promote better integration and cultural awareness.

Doreen had great tenderness and wisdom that she imparted easily, and a smile that was infectious.

Catherine McGowan, a former Independent MP in the Victorian seat of Indi said more women needed to take a stand in the political arena.

She explained her journey to politics through various souvenir T-shirts – of various organisations including ‘Women in Agriculture’ and ‘Women on Farms Gathering’ committees, that she has been involved in.

All this combined experience gave Catherine the confidence, knowledge and impetus to forge a path where she could achieve more.

Catherine urged the crowd not to underestimate their own abilities and strengths and to put their hand up to make a difference.

The Women on Farms Gathering had wonderful feedback from the attendees about Port Fairy and the region, which was showcased through various tours to Treloar Roses, Bay of Whales Gallery, Narrawong Lavender, Natures Way Eco Sanctuary, Noodledoof Brewing Co, and a taste of Irish Culture with St Brigids and Mickey Bourke’s Hotel in Koroit.

Many of comments on the feedback sheets were about the difficulty choosing tours and/or workshops with women wanting to do more than they could fit into the weekend.

The committee was elated with the response to the weekend and wished Inglewood well with its gathering scheduled for November 12-14 (which was rescheduled from 2020).