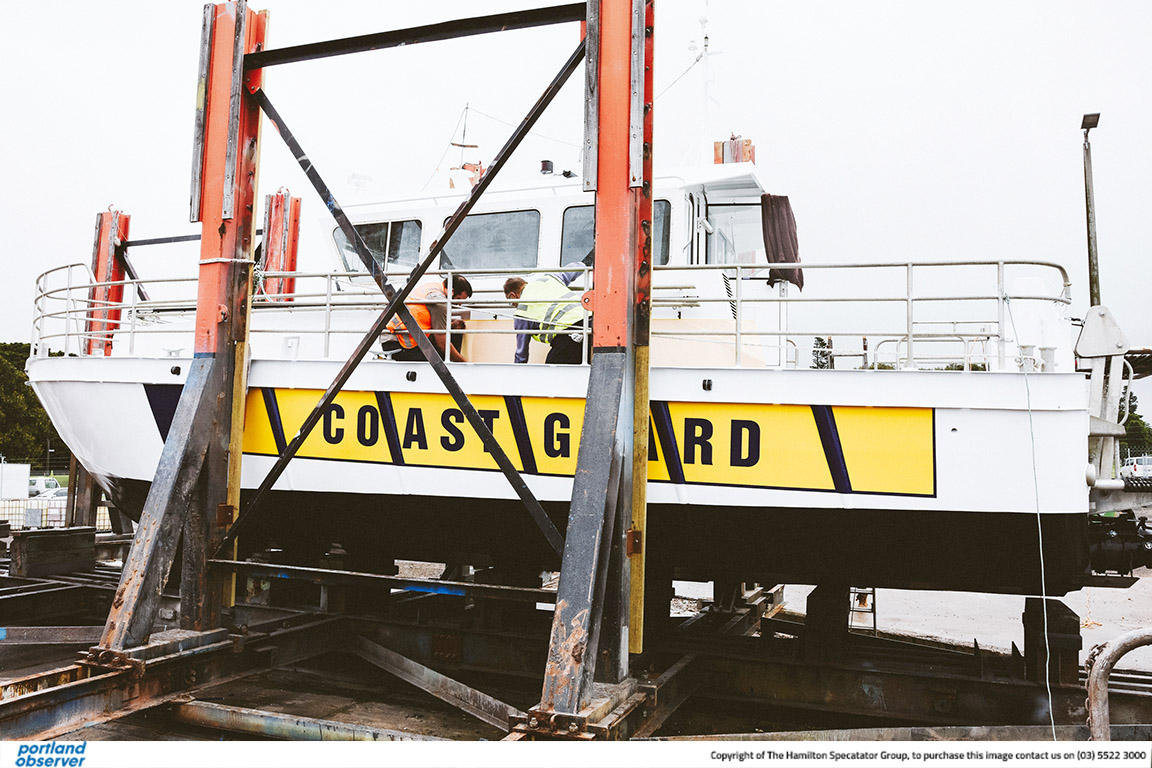 THIS is what the Helen Handbury will look like in a few weeks – the Warrnambool Coast Guard vessel just before it came off the Portland slipway on Tuesday. Picture: KAREN HODGE 210427kh33
By Chalpat Sonti

THE familiar – and comforting to those stuck at sea – yellow colour of Coast Guard Portland’s vessel Helen Handbury is about to become but a memory.

It will go up on to the Portland slipway in the next couple of weeks to undergo a major refurbishment, that demonstrates the wider local benefits of using the facility.

The Helen Handbury’s sister vessel from Warrnambool came off the slipway on Tuesday after a similar refurbishment, made possible by a $167,000 grant under the state government’s coronavirus pandemic stimulus funding.

That sees Coast Guard vessels, among other things, pained largely white, while there is plenty of work done inside the boats such as on the upholstery.

But the major change is $80,000 of new state-of-the-art electronics which will allow the vessels to link to the likes of Water Police, which can then send search patterns to be loaded straight on the system.

“That means we can pick up Water Police and other marine search and rescue and they can use the equipment on the boat straight away,” he said.

Portland commander Chris Hulonce said there were practical reasons for delaying the Helen Handbury until after the Warrnambool boat.

“We have to be able to operate out of Portland all the time (Warrnambool has been covered by Port Fairy while its boat underwent the refurbishment),” he said.

“Once we’re on the slip we’ll hang on to the Warrnambool boat and operate it until we’re finished.

“We’ll probably have a few more extras done such as on the engines and other things as well.”

Mr Wood was pleased with the end result for his unit’s boat and being able to get the work done in Portland.

“We ‘re using all local contractors here and we’re very pleased to be able to do that,” he said.

“In particular Scott Kempton (the slipway operator) and Bayside Industrial Coatings (a Portland business that did the paint job) have done a great job under really adverse conditions.”

Mr Kempton has operated the slipway for just over one year and said the Warrnambool vessel was the 20th to go up on the blocks in that time.

They had largely been local boats though there were a couple from Lakes Entrance and even a yacht under emergency from Apollo Bay.

“Every one’s been really good, no hassles,” he said.

“We try to keep everyone happy and the boats keep coming up.”