A century of adventures 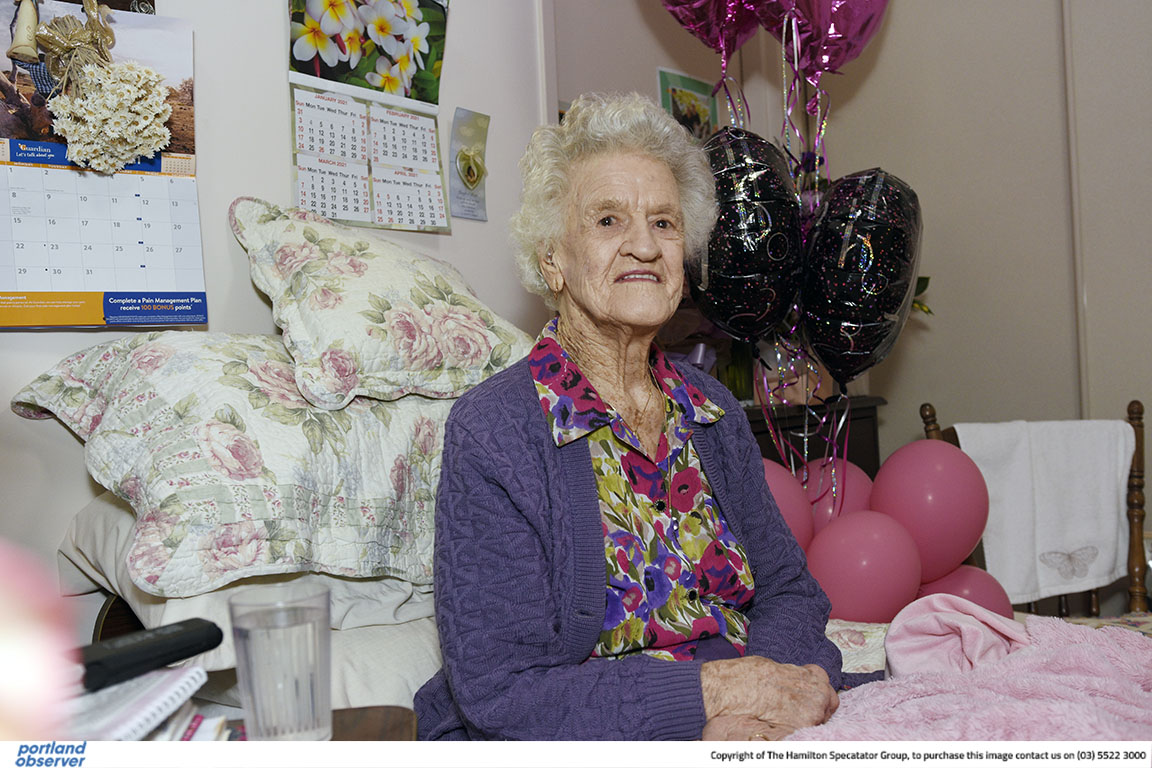 ADA Harris has not let age slow her down. Picture: KAREN HODGE 210428KH56
By Angela McFeeters

SHE reads a Danielle Steele book a week, does word searches, is keeping on-the-ball with her footy tipping and reached 100 on April 25.

Ada Harris may well be Portland’s most switched-on centenarian.

Mrs Harris celebrated her birthday with more than 100 family members and friends at the Portland RSL Memorial Bowling Club, delighted to be able to catch up with people including some she hadn’t been able to see since her 90th birthday at the same venue.

About 30 of them travelled from interstate to mark the occasion.

She has lived a busy, active life, including 29 years on the family farm at Tyrendarra with her husband Ken, who died in 2010.

Twelve of her friends at the birthday celebration were women she would catch up with on a Monday until just a few years ago.

The group would “walk for miles and miles” together, exploring paddocks or more formal walking routes and tracks such as the Great South West Walk.

Family members would also be drawn into walks when they were visiting, too, even if they were young.

Mrs Harris is known among her family for the colourful 80 tartan rugs she has crocheted and for the long stitches she produced.

The couple had the first of their three children when she was 19, and they were married for 72 years.

When she was 57 the couple faced an unexpected hurdle.

The pair were on one of their fossicking adventures with some friends when she was bitten by a king brown snake.

They were about 100km away from the nearest place they could get help – a police station – at the time, and she had to be carried down the rocks of a cliff by three people.

Mr Harris tried to suck the poison from her wound – as was done at the time, she said – and she was flown to Alice Springs by the Royal Flying Doctor’s Service.

“The doctors said my husband should have come in too because he sucked the poison,” she said.

“My leg swelled up like billy-o but they didn’t need to give me antivenom because the venom didn’t go in.

“My husband drove our Volkswagen (combi van) in by himself, and I stayed there for two days.

“When we returned to our friends the couple had a lovely cake for us. Only one person found a stone on that trip.”

The couple also had other adventures together such as buying chicks on the way home from their honeymoon so they could eventually sell their eggs, hand-cleaning the eggs before they went to market, and building a house together.

Some days Mrs Harris would be left to milk the cows on their farm while Mr Harris indulged in his love of fishing, particularly along the Fitzroy River.

They spent plenty of time in their garden, eating all their own vegetables and Mr Harris’ fresh fish catches.

Mrs Harris’ daughters Lorraine and Phyllis were pleased to make it to the 100th birthday celebration.

The day was tinged with some sadness as Mrs Harris’ son John – who lives in Brisbane - was unable to attend; his wife is critically ill at the moment.