A warehouse that tells a story 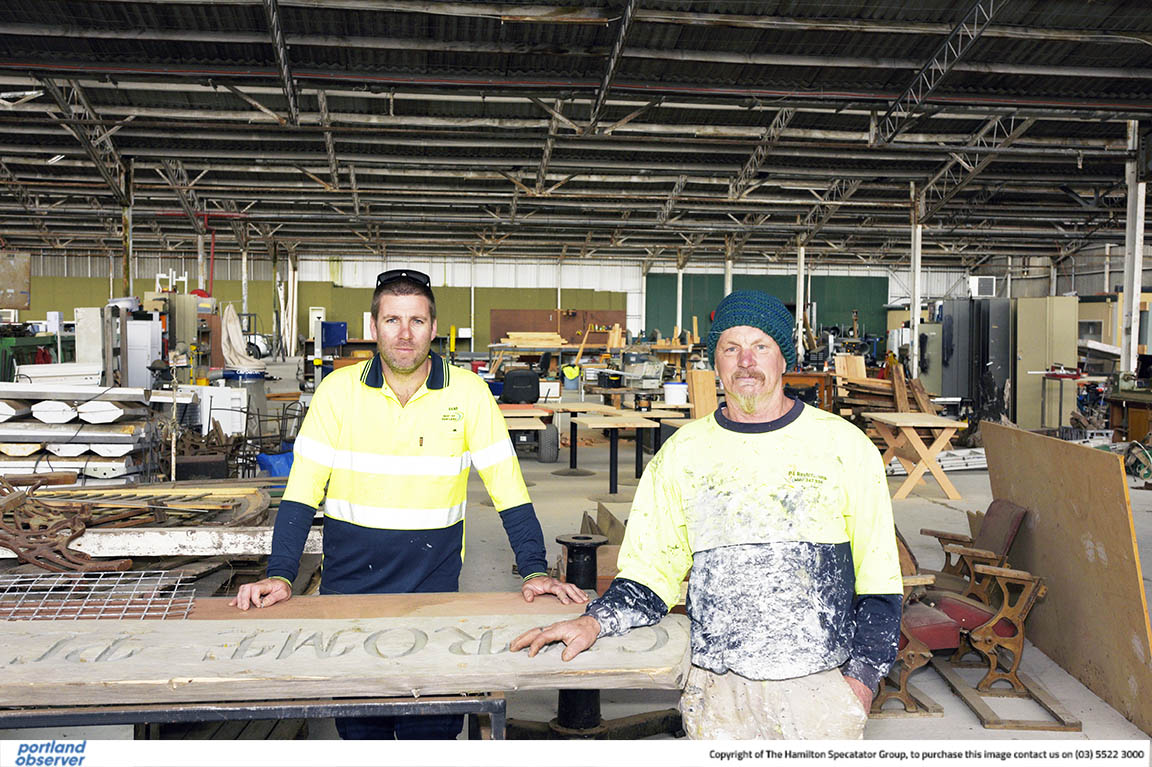 BIG plans… Evan Bott and Clinton Saunders are among four locals looking to turn a huge warehouse on the corner of Browning and Learmonth Sts into something right out of the ordinary – a paradise for tradies, craftspeople and anyone looking to find a hidden treasure among a pile of scrap. Picture: KAREN HODGE 210427kh02
By Chalpat Sonti

WHAT do custom timber cuts, a scrap metal facility, learning how to lay bricks, building furniture for pubs and a music studio have in common?

Pretty soon, all going to plan, they’ll all be in the former Glenelg Warehouse on the corner of Browning and Learmonth Sts in Portland.

Four local men have big plans to turn the 7500 square metre warehouse into a sort of community hub for tradies and other crafts.

They even have a name for the venture – Raconteurs.

“That was my idea, I’m a story teller,” said Clinton Saunders, who along with his son Ben, Evan Bott and Peter Zwiers, is behind the idea.

“There’s always a good story to be told in here, and it gives Portland something it hasn’t got.”

The site is also the venue for Mr Zwiers’ initiative, a new scrap metal recycling business, as earlier reported in the Observer and which has yet to be approved.

A Glenelg Shire Council spokeswoman said 17 objections had been received – a handful of those asked questions relating to the proposal and applicant at the council’s April meeting – and there was also a request for more information from the Environment Protection Authority.

The plan is for a demolition and scrap metal shop inside the building where items will be able to be bought like a second-hand store.

The Observer recently had a tour of the warehouse, which is in the early stages of its redevelopment.

Several rooms for tradespeople, about the size of a single garage shed, were in the process of being built and a few have signed up already including a stonemason and horticulturalist.

A guitar maker was also in the early stages of setting up his business, while there are also plans to teach trades such as bricklaying.

In another area is Portland’s biggest metal bender, while near the tradies’ rooms is an area for a portable mill that will specialise in custom timber cuts.

There’s even plans for a music studio and spray booth.

A large amount of scrap steel was taking up space in the middle of the warehouse, while builders have leased shipping containers in another part of the vast space.

There has been a big clean-up underway, with 11 tonnes of phosphate, a former use for the building, removed from the floor when the Observer visited, with another 6-7 tonnes to go.

There is plenty of room for a “road” inside the building as well, with the lane allowing vehicles to drive through to where they need to go.

The partners reckon there’s enough room for 600 people in the warehouse and they hope that the proximity of trades and crafts people to each other will see them able to collaborate easily.

Mr Saunders said the plans had been in the works for some time, though not initially at the present site.

“We’ve always done bits of these things ourselves, but we’ve been doing them in different spots,” said Clinton Saunders, who with his son runs P4 Restorations and Floors doing everything from restoring war memorials to building furniture for pubs and road linemarking and spraycoating.

“I’ve just sold my factory in Scott St, a half-acre with a big shed, to move in here.

“We were looking at properties where Pete could do his thing (Mr Zwiers runs Westvic Demolition and Asbestos Removals) and we could do something together.”

Originally they looked at the disused VicTrack buildings on the railway station site at Anderson St, but Mr Saunders said VicTrack told them they were looking to lease those to community groups.

“Pete was cleaning up the asbestos in here, got talking to the Melbourne-based owner and heard that this was available.”

“Special order timbers are more a niche market of timbering,” he said.

“We’re working with Whiteheads which is a big supplier for our business.

“We can also harvest trees and bring them back here – it’s all sustainable timber, like cypress, all good timber.”

Mr Saunders said the warehouse overall would be “like a mill market for tradies”.

“People can buy stuff you can’t get any more for a really good price.”