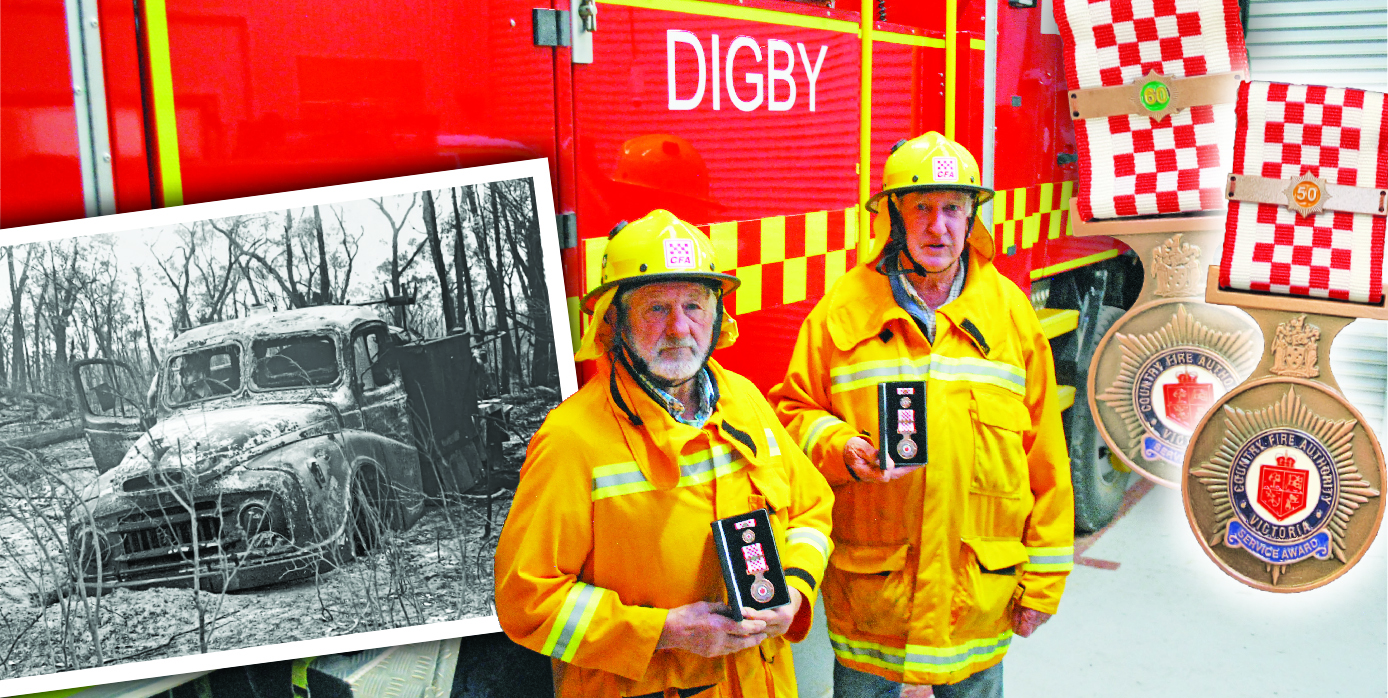 THEY have seen some of the most horrific disasters in our district’s history, risked their lives on many occasions and between them, given more than 110 years’ service to their community.

And they reckon they’ve still got a few years left to give.

In the lead up to national volunteer week, the CFA honoured a troop of Digby Fire Brigade’s volunteer fire fighters and members with service medals, including Geoff Wombwell and Ed Hiscock, who have served 60 and 50 years, respectively, with the CFA.

Facing his first fire aged just 14, now-82-year-old Mr Wombwell said it was not a matter of choosing to take on the task, but “just something everyone did back then”.

“It’s probably closer to 68 years that I’ve been doing this, because we had a Digby Fire Brigade before the CFA came in,” he said.

“There were a couple of utes and a truck, you threw a tank on and that’s how we worked, we a hand pump and a hose and blimey, the bloke on the hand pump worked pretty hard, I can tell you.

“It’s just something you do in a small town … most of the farms had three or four people working on them, they all helped out.

“They used to burn all the roads back then and they used to grab all the kids to do the hard work.

“They’d train us, show us what to do … occasionally a fire might sneak through a fence, you’d jump over with a bough and belt it out.

“It never got out of control, with the regular burning.”

He said the most valuable lesson he had ever learned about fires, he had learned very early on and it still stuck with him today.

“We had an old captain here, Frank McIntyre, he sent every firefighter out with a box of matches,” Mr Wombwell said.

“If a fire was coming at you, you lit the grass at your feet, stomped it out and stood on the black.

“The black can’t burn … they don’t teach you that today.”

While routine burns made up much of his early days’ work, it was the 1980s that brought one of the scariest times for the small brigade at Digby, when the now infamous Ash Wednesday fires, razed the state.

“Me and (Mr Hiscock) … we were following a bulldozer into a fire, to keep it damp, you know?” Mr Wombwell said.

“We were in the sand, Eddy was driving and one front wheel fell into a hole about four foot deep, three foot round.

“There was a bloke behind us, so he followed (the bulldozer) in … we were going to try and get to the Merino truck … walked out.”

After burning a fire break around the disabled vehicle, the pair made their way out of the danger zone and once the bulldozer returned to assist, made plans to return and retrieve their vehicle.

“We’re looking up and see black smoke going up … we said that’s the flaming truck!”

Despite burning a firebreak around their vehicle, fire had taken over a nearby tree and crept along a branch overhanging the Digby truck, dropping cinders onto the vehicle and claiming it in minutes.

“You wouldn’t read about it … I reckon we were a bit lucky not to be there,” he said.

And despite the close call – just one of many – he would not change a thing.

“It’s just something you did … we had about 50 people, perhaps, in those early days,” Mr Wombwell said.

“Digby had a big area around it, most of the farms had three or four people working for them, Ardgarten had 10 or 12, they all helped out when they could.”

He also paid tribute to his late wife, Bev, who, while never fighting a fire, was an integral part of the brigade.

“She got in there and cleaned the station, kept it all straight, made sure we were all fed, the whole town was the same,” he said.