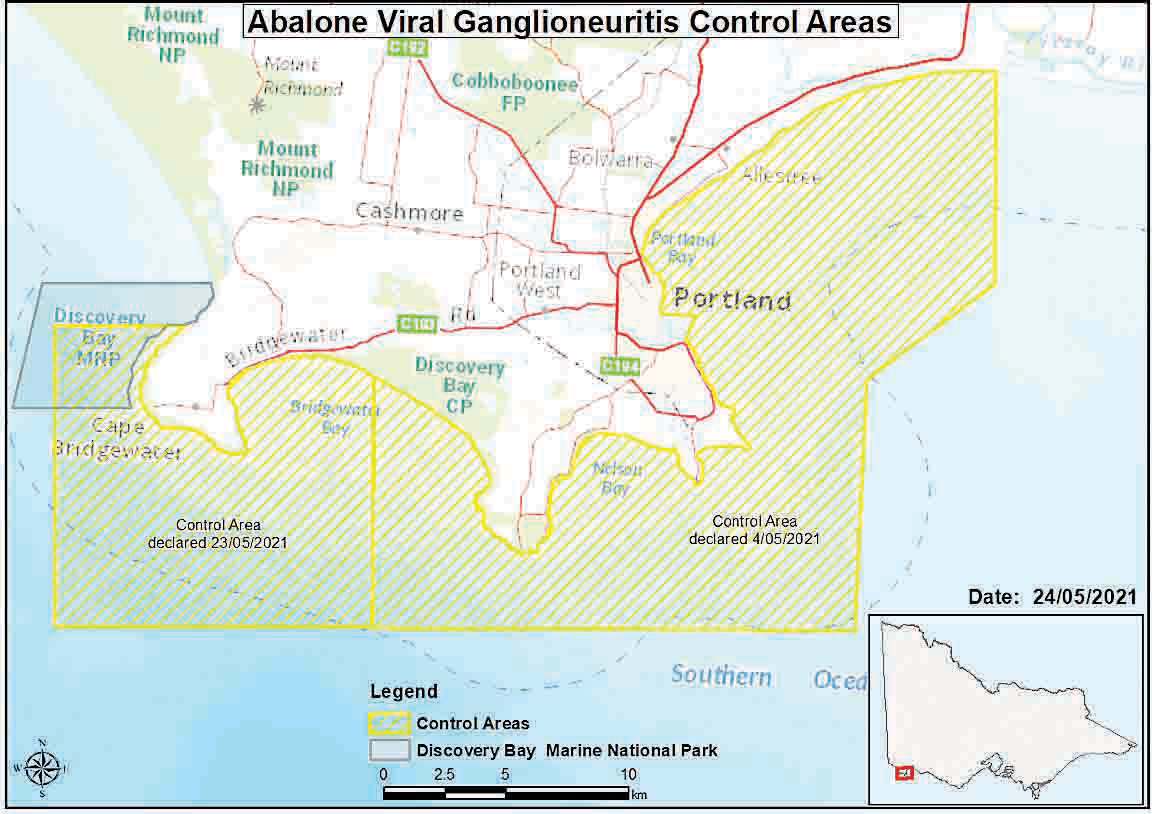 THE latest map of the control area, which extends from west of Cape Bridgewater to east of Narrawong. Picture: SUPPLIED
By Chalpat Sonti

AUTHORITIES are looking at reducing the area off-limits due to the abalone virus in the coming weeks, as uncertainty remains about whether it is here to stay or not.

The plans come as a remarkable hypothesis has emerged about how the virus flared up again, 11 years after it was last seen in the area.

Agriculture Victoria and the Victorian Fisheries Authority held a public meeting at the Portland Civic Hall on Tuesday night, attended by about 30 people, mostly connected to one of the fishing industries.

A control zone of between 2km and 10km off the coast between Cape Bridgewater and Narrawong has been set up after the Abalone Viral Ganglioneuritis was discovered in abalone near Cape Nelson on May 1.

That has meant no fishing, or even boats stopping, in the control area, though earlier this week that was slightly relaxed to allow fishing without a sinker.

At the same time the control area was extended west to take in Cape Bridgewater as a surveillance program was conducted by divers and biosecurity staff.

Tracey Bradley, Agriculture Victoria’s principal veterinary officer for aquatic animal health, said the virus was a form of the herpes virus and like it did in humans, it could sit around dormant in abalone – the virus has not been seen locally since 2010.

“We were felling pretty cocky in my area of work,” she said.

“For whatever reason we thought that was the end of it. It’s very disappointing for everyone involved that it has come back again.”

Just as a cold sore broke out in humans when they were stressed, it was thought that something similar happened to the abalone.

“Why is it coming out after all these years,” Dr Bradley said.

“Maybe there was some sort of stress that caused this virus to come out.”

That event was possibly the large storms and swells in April.

“There was a lot of activity under the water that would have potentially caused a lot of stress,” she said.

That was questioned at the meeting, given there had been other big storms in the past 11 years, but was backed by Western Abalone Divers Association chairman and Portland abalone quota holder Craig Fox who said April’s storm created a huge amount of damage.

“I saw rocks as big as a car broken in half around Devil’s Kitchen,” he told the Observer.

Mr Fox said that abalone then also congregated together after sand was washed away under their rock habitats.

He has also been at the forefront of the surveillance program.

That has been hampered to some extent by the weather, but a special underwater drone is being built in Tasmania which will allow surveillance to take place regardless of whether divers can go down or not.

Dr Bradley said there had been no sign of the virus in the eastern part of the control area, between Devil’s Kitchen (east of Cape Nelson) and Lawrence Rocks.

However, along with extra positives in the area around Murrell’s Beach and Jones Reef, there had also been confirmation of the virus at Horseshoe Bay, west of Cape Nelson.

Divers took samples at Seal Cove on Monday, but those did not appear infected, though the results weren’t back by the time of the meeting.

Mr Fox said there had been no surveillance across Bridgewater Bay due to the large amount of sand, an unsuitable habitat.

“We’re looking first at where a lot of abalone congregate.”

Dr Bradley offered some hope that the restrictions might be eased.

“We obviously can’t keep Portland locked up forever,” she said.

“Based on surveillance we’ll move the eastern boundary in.”

That was backed by Victorian Fisheries Authority chief executive Travis Dowling, who said in the next few weeks it could be lifted in some area and strengthened in others.

“These decisions aren’t made lightly and we are aware of the impacts that they have on business (see story on Page 7),” he said.

“It is a lot to ask for and we are going to try and manage the virus to limit its impact in the community.”

Yumbah Narrawong general manager Tim Rudge told the Observer after the meeting that while he supported that, he would ask that a control area remain in place around the abalone farm as “some sort of protection into the future”.

“We’re so, so grateful that the regulators have been very proactive and have taken the precautionary principle,” he said.

Mr Dowling said the virus survived on “hard” surfaces so the likes of fishing sinkers, wetsuits and cray pots could transport it.

In response to a question asking if the area would continue to be closed should the virus reappear again in future, Dr Bradley said it was possible the virus, at present considered exotic (it originated in Taiwan but this is a Victorian variant) could be classed as endemic.

Local abalone industry identity Vin Gannon raised the point he made in Tuesday’s Observer about there being no signs at Murrell’s Beach warning visitors of the presence of the virus and was told signs were being made.

Mr Fox and Mr Dowling thanked the Portland community for their support in observing the restrictions around the control area.

“Talking to people in the community they have been very supportive and understanding of what we’re going through.

“This has the potential to be catastrophic for our zone in Western Victoria, that’s why it’s so important to get it under control.”