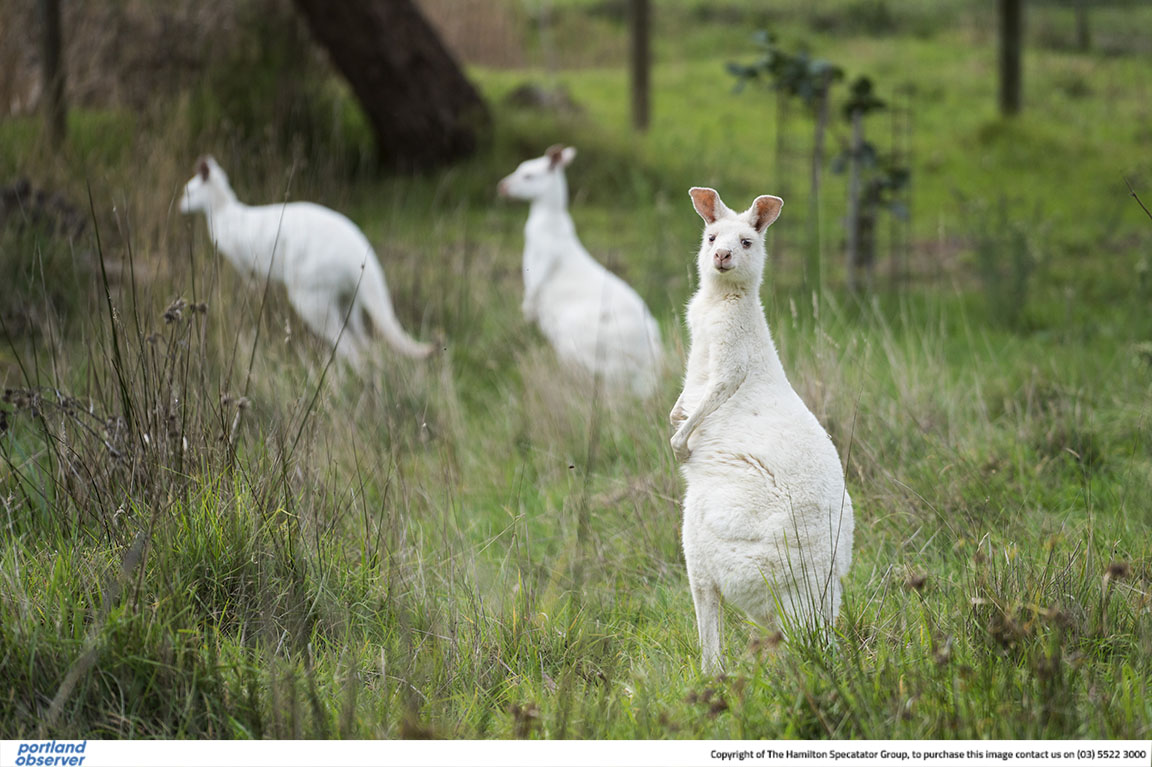 WE MAY not have felt it these past few days, but the grass is definitely greener in Victoria for four new Portland residents, including two particularly noticeable ones.

The park is managed by the Portland Lions Club, who bought the ‘roos from a breeder in Bordertown that they have previously purchased kangaroos from.

Dedicated volunteer Huon Beauglehole said the kangaroos were having their diets supplemented with hay in Bordertown, it was so dry, while Portland’s fauna park has plenty of fresh grass available for them.

He’s helping the new arrivals settle in with some familiar hay initially, but said they didn’t appear to be having any troubles settling in and had been happily grazing as well.

When the Portland Observer visited the kangaroos were a part of the ‘roo mob, sticking together and warning each other when people were around.

The new kangaroos were anaesthetised and neutered – or desexed – before leaving Naracoorte and arriving in Portland.

They are all male and join a mob of males because the park is not licenced for breeding, Mr Beauglehole said.

Their age isn’t quite known, but they are smaller than their new Portland friends.

White kangaroos have been a feature of the popular park for the past 16 years.

Visitors to the park frequently enjoy its playground, green spaces and barbecue facilities, and they can also wander around its perimeter or through the centre fenced-in walkway to get a closer look at its wildlife, which also includes emus and a pair of goats that keep the grass down.

The Fauna Park can also be accessed from Wyatt St; and a gravel path has been built around the perimeter of the wildlife reserve.

Car parking is best accessed from Bridgewater Rd near the intersection with Lalor St.

Meanwhile Lions Club member George James said the club was delighted to have been able to raise their target of $5000 for Portland District Health, mainly through firewood sales.

The club participated in the Murray to Moyne cycling fundraiser earlier this year, raising $500 in sponsorship, and were kept busy with the timber sales.

Mr James thanked the community for their support of the sale and said they “couldn’t chop enough wood” for them.