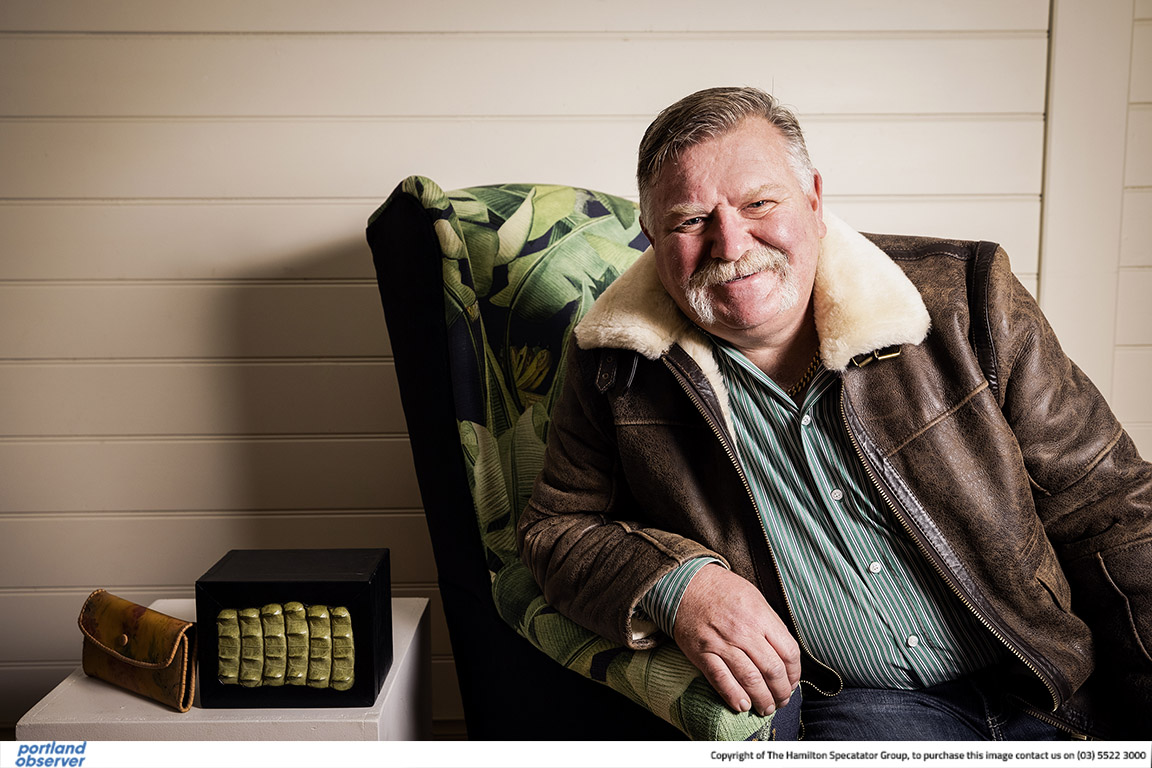 CROCODILES and cane toads might not be a common sight in South West Victoria, but Rick Rowbottom is doing his best to change that. Picture: NICOLE CLEARY 210604nc003
By Chalpat Sonti

PORTLAND is about as far from northern Australia as it is possible to be, but a local craftsman is doing his best to spread a couple of that region’s famous inhabitants to the southern part of the nation.

Rick Rowbottom is using the likes of crocodile and cane toad skins as part of his work, and his custom leather operation has seen strong demand.

Mr Rowbottom has been well known over the years for his leatherwork, having won awards in places as far afield as the US and the Sydney, Melbourne, Adelaide and Brisbane shows.

Having grown up in Bessiebelle (his mother had been from Portland), he went to school there and in Portland before becoming an apprentice cabinetmaker in the latter.

That has been his trade since the 1990s, and he continues to practice it from home “more so just as a hobby” while also working casually as a disability support worker.

But it has been some hobby.

“I do a lot of furniture restoration work, upholstery, French polishing, all that sort of traditional stuff,” Mr Rowbottom said.

But he’s not afraid to deviate from tradition.

Whips are perhaps his best-known leather product – he supplies them each year to Federal Member for Wannon Dan Tehan to hand to the winning riders of the three main races at the Warrnambool carnival in May, having also done so for Mr Tehan’s predecessor David Hawker..

Mr Rowbottom said he had made 43 of those so far as well as stockwhips for the Macarthur rodeo.

And this year, coronavirus permitting, he will judge the leatherwork at the Royal Melbourne Show.

The interest in leatherwork began with his grandmother’s cousin, who had the last working bullock team in Victoria and who taught Mr Rowbottom how to make whips.

“I sod some of those and from the money I made I went to Queensland and a whip-making school run by RM Williams in Toowoomba,” Mr Rowbottom said.

He kept in contact with people he met there and learned how to do the finer work – such as the 1mm strands for whips.

One of those people was Malcolm McGregor who taught him a technique taught to himself by RM Williams, who in turn was taught it by the man who started him out on his business empire, Dollar Mick.

Learning from the best is what marks Mr Rowbottom’s creative life.

He has turned teacher himself – he returned to teach at another Queensland conference where he had learned to make a saddle (which he still uses himself) and has also run whip-making and French polishing classes among other things.

But he hasn’t stopped creating.

“I use all sorts of exotic leather,” he said, and that’s an understatement.

There’s cane toad for one. Crocodiles are another. Then throw in ostrich, kangaroo, barramundi and snakes, and you get the picture.

They’re all sourced from sustainable suppliers up north or in the case of barramundi a bit closer to home (it is the only Australian fish skin able to be commercially bought).

“There is a market, but it’s quite a niche market,” he said.

“People come across these (products) rather than looking for them specifically.”

Purses are a popular item as well as the likes of jewellery boxes.

The kangaroo hides are dyed using a special marbling technique, while the cane toad skin is an inlay in the box lids and barramundi with its rough texture (it is the cartilage of the fish) are also used on box lids.

But he hasn’t forgotten his roots, which is fitting for the newest exhibition at the Julia Street Creative Space, titled Domestic Décor (he is about to join the woodturners group at the centre).

His exhibits are a couple of Georgian wingback chairs with his own adaptations of the form.

They include some interesting fabrics as covers, as seen in the photo on this page.

“I wanted them to be a statement-type piece so they had to be more imposing (with larger wings),” he said.

“It’s hard to find really way out there fabric now and I’ve had my eye on these for a while.”

The chairs took about nine days all up (not continuously), while purses take about four hours.

The dyeing technique for the latter involves mixing a power in water to about the consistency of hair gel, smearing it on glass and dropping the dye on it.

That is then swirled around to give it a marbling technique before putting the leather on it for a few minutes.

It is then pulled off with the excess dye washed off and left to dry.

And while “exotic” leather features largely in Mr Rowbottom’s work, it is not always the most suitable.

“For the stock whips I use red (cow) hide for a four-plaited whip,” he said.

“It’s more durable than kangaroo hide. The problem with whips is people hit the ground with them and they were never intended for that.

“With a kangaroo hide, gravel, concrete and dirt are all abrasive and will corrode them fairly quickly.

“You can also make a red hide whip in three hours, while it takes two days with kangaroo hide.”

And he’s still learning, as he hopes to do with the woodturners.

“It has collective years of experience,” he said.

“Everybody’s got their own things that they do, and you can always learn.”