How’s this for a close-up look 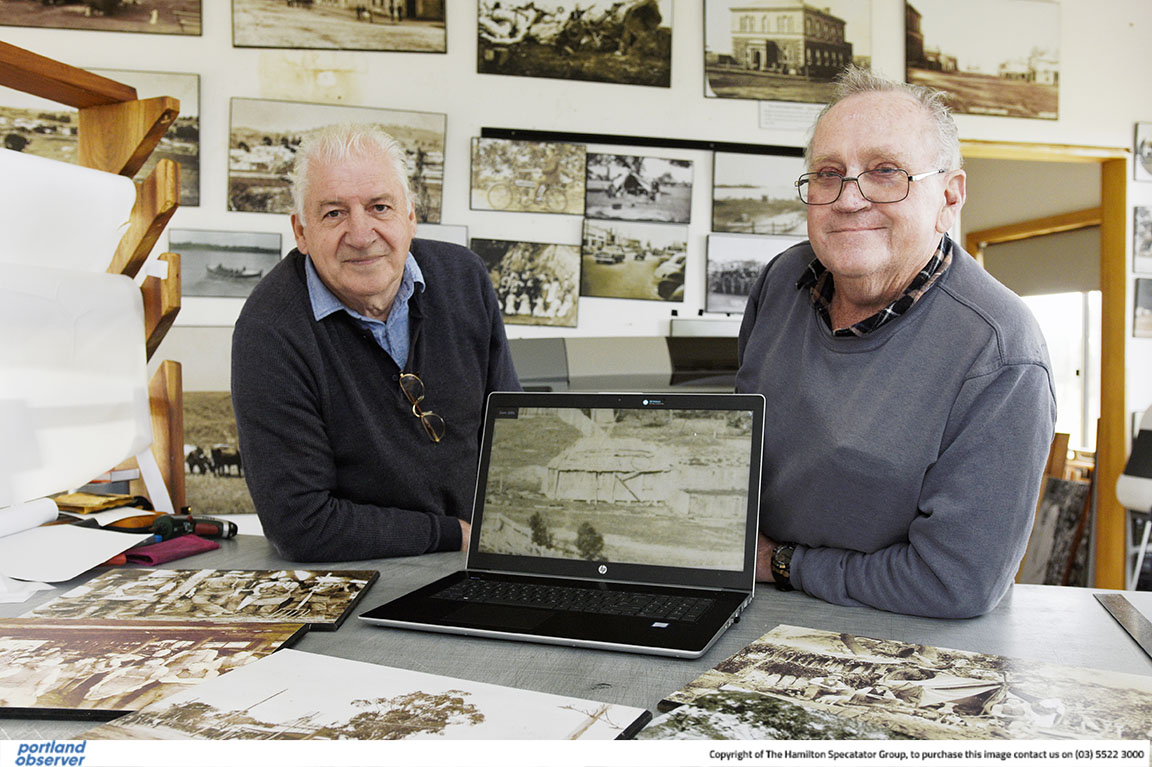 RICHARD Sebo and Vern McCallum are pleased that a big effort to get the Vern McCallum Collection online has finally happened. The laptop in front of them shows off a feature of the website – it is of the picture that started the collection, a scene in Digby of which a little piece was Mr McCallum’s grandfather’s wheelwright shop, here magnified to more than double its photographic size. Picture: KAREN HODGE 210615kh01
By Chalpat Sonti

ZOOM might in these coronavirus pandemic days be almost exclusively associated with software that enables online meetings, but its original meaning holds truer than ever for the digital version of the South West’s premier collection of historical photographs.

The Vern McCallum Collection has finally gone online, the result of three years of hard work, and the odd glitch overcome along the way.

But more than 15,000 of the collection’s 19,500-plus photos dating back to 1859 are now available for anyone to view at mccallumcollection.org – and it is some view.

Not only can the photos – which cover an area from Horsham in the north to Warrnambool in the east and west to Mount Gambier and which have been gathered by Mr McCallum over more than 50 years – be searched for quite easily and commented on to provide more information, they can also be magnified, giving viewers a never-before seen appreciation of any and every feature in a picture.

And that is appreciated as much as anyone by the man whose collection it is.

“People can go into a group on the screen and bring up someone they’re interested in and identify them fairly easily.

“To be able to identify very old photos is pretty good.”

It will also continue the tradition of the collection helping people in many different ways, a recent example being a man trying to rebuild old Indian hawker wagons at Millicent to see what one looked like at Heywood.

“He zoomed in on a photo and said he could see exactly how it was put together,” Mr McCallum said.

The digitisation could not have happened without the work of the Friends of the Vern McCallum Collection, particularly Phil Ruge and Richard Sebo.

“It’s been a monumental task and if Richard and Phil hadn’t have been about it wouldn’t have got done,” Mr McCallum said.

The Friends – formed in 2018 to promote, preserve and find a permanent home for the collection – also sourced funding for the project from the Pacific Hydro community grants scheme, Ray and Joyce Uebergang Foundation and the Gwen and Edna Jones Foundation.

“We couldn’t have gone anywhere without their support,” Mr Sebo said.

The website was a five-year deal with a Canadian company, and it took six months to build.

That largely involved migration of a database on Mr McCallum’s laptop – previously the only electronic copy of the collection.

“It wasn’t really very compatible with a modern platform that could be put on the web,” Mr Sebo said.

“The migration of one to the other proved pretty complicated.

“We’re still finding instances of images that haven’t come across. We investigate those and will continue to do that with this company over the next couple of years.”

Anyone who knew of an image in the collection that they couldn’t find on the website should also let the administrators know via the contact form.

And public interaction with the photos was just as welcome – especially supplying missing (or correcting incorrect) information about photos, which can be done in the comments section.

The website also had quick and advanced search capabilities, and the ability to request prints.

“The advanced search is good for people who are used to going through an image collection and can target more quickly images they’re looking for,” Mr Sebo said.

For Mr McCallum, the digitisation has also been a relief.

“There’s too many collections you see that people have put together and when they die the whole thing just goes,” he said.

“That’s a crying bloody shame. To have 19,500 photos that have all been put together and to lose that, that’s criminal, it really is.”

The collection continues to grow, despite not actively looking for photos.

“Since Christmas I’ve got about 600 without even trying,” Mr McCallum said.

“If you were trying I reckon you’d get a couple of thousand a year without any worries. What sort of collection would it end up after another 10 years?”

And there remains one unfinished task – to find the physical collection a permanent home, somewhere that is low-cost “because we don’t get the numbers through it to make it viable (financially)”.

It has moved out of its most recent home on the corner of Keillors Beach Rd and the Princes Hwy after that property was sold recently.

“We had that place for five years and that was pretty good, and we appreciated that,” Mr McCallum said.

“If someone could come up with another building where we could put them that would be great.

“We’re not going to make money out of them, they’re something that’s there for the public.

“It would’ve worked quite well with a council building, but it’s big enough to take up any building in Portland, I could fill any building anywhere.

“The (Portland Cable Trams building) or somewhere like that would have been ideal, it’s very easy to run, you open the door and let people go in.” The Friends group is also looking for new members to help its work – anyone interested in joining can also get in touch via the contact page at mccallumcollection.org