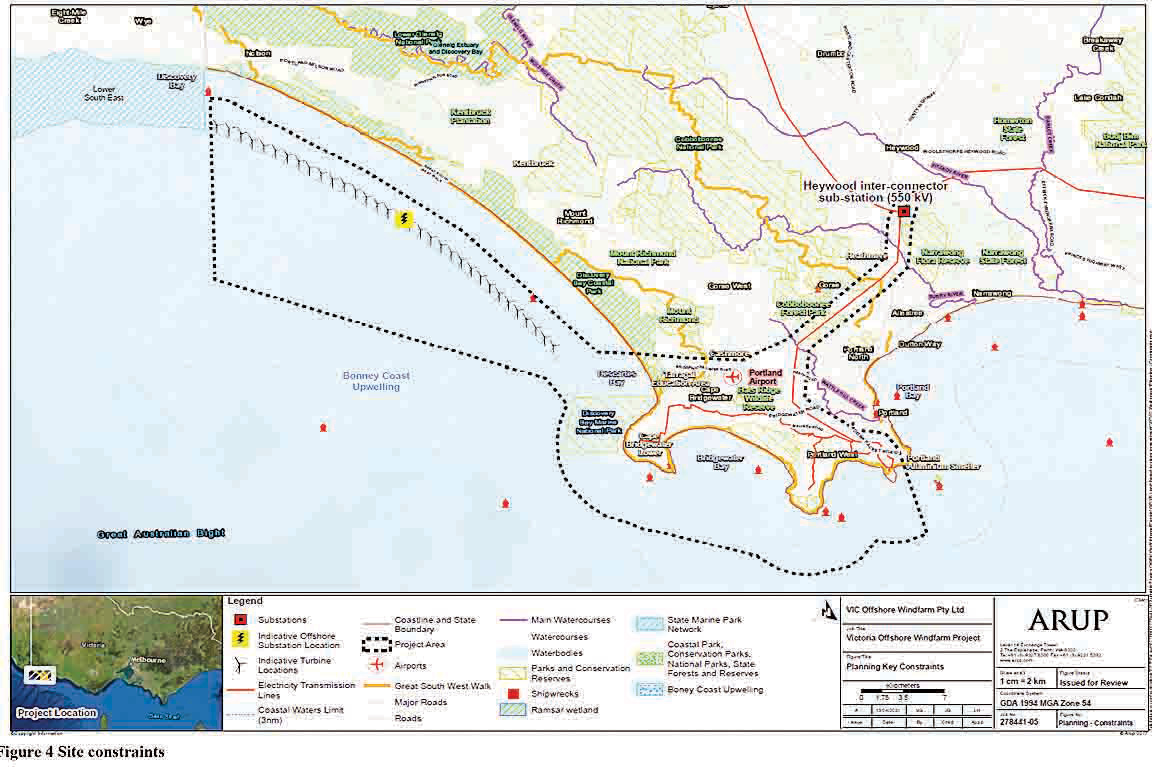 A $1.5 billion offshore wind farm of up to 62 turbines is being proposed for the Discovery Bay region north-west of Cape Bridgewater.

Australis Energy said it is exploring the opportunity west of Portland - as well as separate projects in Western Australia and South Australia - with the goal of having its first offshore project operating by 2026.

The turbines for the Discovery Bay-based project would be buried 30 to 50m below the seabed in waters of up to 45m deep.

They would be located between 5.5 and 7km offshore and would be positioned in an arcing line from near the South Australian border to immediately west of Mount Richmond according to planning documents submitted to the state government.

Each turbine would generate between 8 and 15 megawatts, with the project able to generate up to 495 megawatts, or enough energy to power 330,000 homes.

The wind farm would have just over half the generating capacity of a 157-turbine project being proposed nearby in pine plantations at Kentbruck, which could generate up to 900 megawatts according that project’s developer Neoen.

Aus       tralis says in planning documents provided to the Victorian government that buried or “mechanically protected” subsea cables would connect the wind turbines to each other and to an 800m square substation fixed in place offshore as well as to an onshore substation.

Battery storage could potentially provide “fast frequency response to provide stability to the grid,” and a new overhead transmission line onshore would then connect the project into the grid.

A transmission line of about 30km would be built to connect the project into the electricity grid - potentially at Heywood’s terminal station.

The towers would need to be shipped vertically from onshore before they are installed.

“Portland is also close to existing infrastructure that will enable effective connection to Victoria’s electrical grid.”

A planning document for the company said offshore wind speeds tend to be higher and more steady than on land, making offshore wind projects provide “the potential to generate more electricity at a steadier rate than most other renewable energy sources.”

The first turbines installed would be expected to last 30 years, however the company would seek a 60-year lease from the Victorian government, with the potential to break it at 30 years.

Marine and environmental surveys will be conducted in the second half of this year, with environmental assessment, stakeholder engagement and community consultation to begin next year according to the project timeline.

However an initial report notes that the pile driving required during the construction phase
“may generate intense pulses of noise that have the potential to impact marine fauna including threatened and listed migratory species (whales/dolphins, pinnipeds, turtles, sharks), and species of high fisheries significance (finfish, rock lobster).”

“Impacts can be permanent (death/injury), long-term (for example permanent hearing loss) or short-term (behavioural, including avoidance), depending on exposure and sensitivity of species.”

Further studies would also help determine the impact of ongoing noise and vibration levels generated by the turbines on “many noise sensitive species,” the report noted.

Australis chairman Mark Petterson led the development of three offshore wind farm projects in the UK, including the 100-tower Thanet project in 2010.

Australis has not revealed where its South Australian project would be developed, with no details available on their website.

Its Western Australian project is expected to be one third smaller than the one proposed locally, and would be located near Bunbury.

Developing the project immediately south, west and east of Portland was not viable due to considerations such as the level of marine traffic accessing the Port of Portland, the visual impact of the wind farm close to a larger population and the depth of water (deeper water) in some of those areas.

The project was referred to Victoria’s Department of Environment, Land, Water and Planning for a decision on requirements for environmental assessment on May 28 of this year.

Details have also been submitted to the Commonwealth government for their environmental consideration.

Both assessments are in the “pre-planning application stage,” Australis noted.

For more information about the project go to vicoffshorewindfarm.com.au and planning.vic.gov.au/environment-assessment/referrals-and-decisions.

Another offshore Victorian wind farm development proposal that is closer to realisation is the Star of the South project east of Melbourne.