An Esky to the rescue after boat sinks 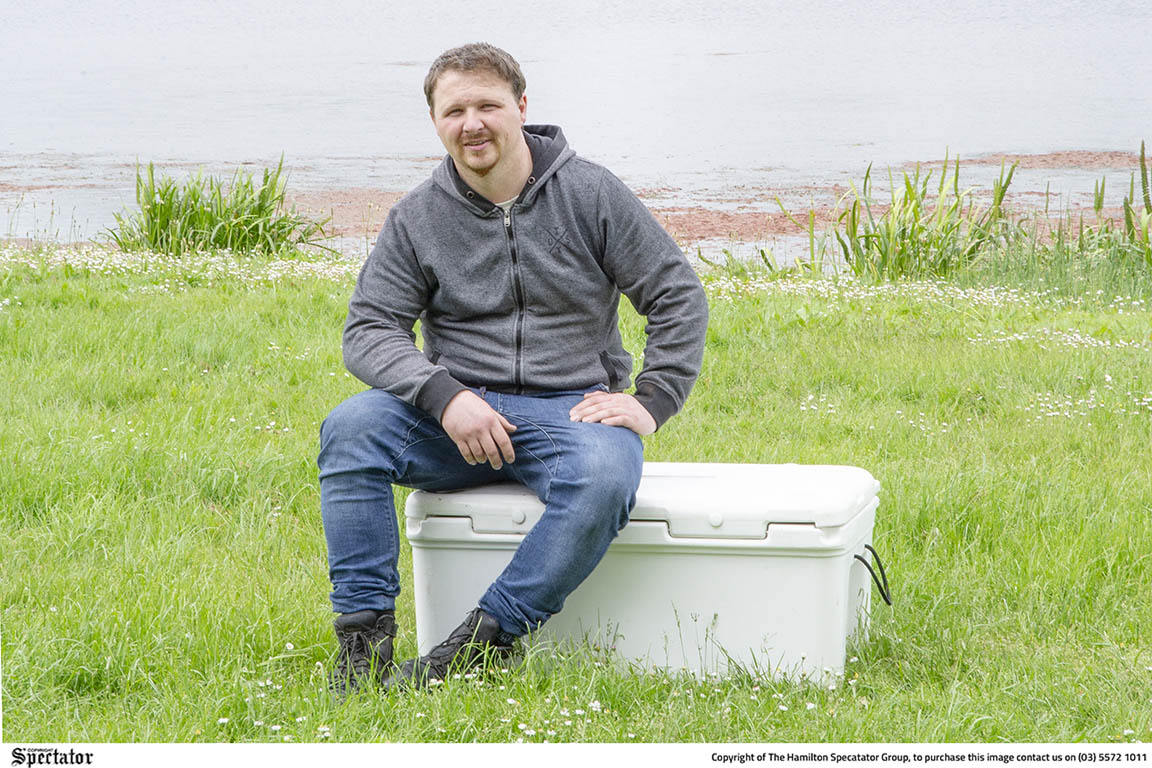 HAMILTON man Anthony Thurgood managed to survive the harsh waters of Cape Nelson on the Monday of Melbourne Cup weekend by clinging onto his Esky until help arrived after his fishing boat was hit by a log and then large wave. Photo: LAUREN HAY.
By Chalpat Sonti

A HAMILTON fisherman has survived the seas off Cape Nelson by clinging on to his Esky until being rescued after his boat sank.
Anthony Thurgood was heading out to Cape Bridgewater for what he thought would be a good day’s fishing on the Monday of Melbourne Cup weekend when the bow of his boat hit a log about 2 kilometres offshore between Cape Nelson and Lawrence Rocks not long before 8am.
He then decided to turn the boat around and head back to Portland.
As Mr Thurgood called Triple Zero for help, his 5-metre boat was then struck by a large wave – he said conditions were reasonable with large rolls every four or five waves.
“Less than 30 seconds later the whole boat was completely gone,” he said.
“One wave finished me off.
“I had taken my life jacket off to put a jacket on and I was talking to the police instead of putting it back on again.
“I ran to the cab to get the flares but by the time I got there the water was pushing me.
“I pushed backwards, dropped the life jacket and in seconds I was under.”
He swam to the tip of the boat, and the Esky, carrying some bait and drink in it, floated up.
The lid was up so he grabbed on and floated, all the while staying on the line to police, though he wasn’t getting anywhere with directions for them.
Mr Thurgood then tried to head for shore as the current pushed him in the direction of the Portland Aluminium smelter.
After what he estimates was about 15 minutes – “then again it’s hard to tell” – help came by.
That was in the form of Aaron Hemley and Greg Rutter, who were also heading out to Cape Bridgewater.
Mr Hemley, a Stawell-based shearer and kangaroo hunter, who broke a world endurance shearing record in 2010 to raise money for his local hospital, probably shouldn’t have been there at that time with his fishing mate Mr Rutter, who lives in Portland.
“We had thought about leaving at 6am but we headed out from the boat ramp about 7.30am,” he said.
“We were hmmm-ing and ha-ing whether we should be going for a few tuna or head to Cape Bridgewater and we decided to go to Bridgey.
“Greg looked out and said ‘it looks like an Esky floating out there’, because the lid was up then he said ‘an arm’s sticking up’.
“Then he said ‘there’s a body’. It was about 150-200m away so we went over there.
“We got a rope and got (Mr Thurgood) into the back of the boat.
“Two boats had gone past him and hadn’t spotted him.”
Mr Thurgood was grateful for being rescued, but what he said next was the mark of a true fisher.
“I had wanted to go fishing so I said to them ‘we’re already here so we might as well make a day of it’.
“Going around to Bridgewater, once you’re there, you’re there, the hardest part is getting around there and I thought ‘we’re already here and they’ve made the trouble to get around here’ so we might as well go on.
Mr Hemley wasn’t so sure.
“He was still in shock so we went back after we pinpointed where we picked him up,” he said.
“It put the wind up him for sure. It was definitely an experience I wouldn’t want to go through and if he had got to the rocks he would have been smashed up, though he was drifting out to sea anyway.
“He had big boots on and everything. I don’t know how he would’ve survived.
“It just so happened we were there. He was very lucky.”
Mr Thurgood did not need any medical treatment after getting back to shore, but he had lost everything bar the phone, backpack and of course the trusty Esky.
However he was left to rue the loss of about $47,500 of boat and gear – he was also uninsured.
A meeting on Thursday with the Port of Portland pinpointed the ship the log might have fallen off, so Mr Thurgood is looking into how he can claim compensation from the owner.
“It was probably a one in 10 billion chance that I hit that log,” he said.
“I was just very unlucky.”
Along with the boat he estimates he lost about $7000 of fishing gear (as well as his wallet and car keys).
“I had two brand new game rods and two brand new bottom bashing rods and they had never, ever hit the water until they sank.
“I hadn’t been out to go bottom bashing around Bridgewater and I swapped Tuesday for Monday to do it because Monday was a good day (weather wise).
“I guess it wasn’t meant to be.”