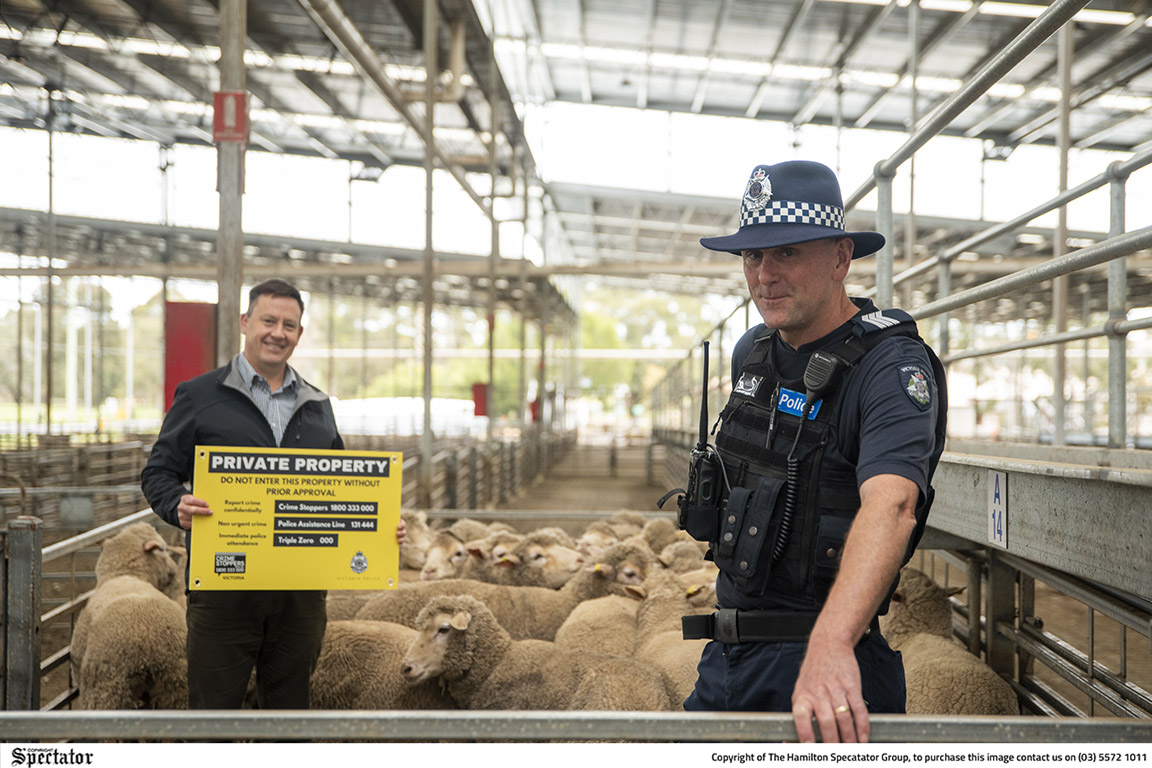 LOOKING to raise awareness for the Victoria Police Farm Crime Coordination Unit (FCCU) and its role in working with the community is Hamilton detective sergeant Mark James and Hamilton acting sergeant and Farm Crime Liaison Officer (FCLO) Roger McClure. As part of a roadshow travelling through Victoria, they will be on hand tomorrow at Hamilton Regional Livestock Exchange (HRLX) from 10am-2pm to talk about rural crime prevention and hand out checklists and farm gate signs. Photo: LAUREN HAY.
By Mark Rabich

FARM crime was being addressed through the Victoria Police Farm Crime Coordination Unit (FCCU) and a roadshow will be coming to Hamilton tomorrow hoping to raise awareness of how the community can help.
Acting sergeant, Roger McClure will be taking time from his normal duties with the Hamilton Crime Investigation Unit and stepping into his additional role as a designated Farm Crime Liaison Officer (FCLO) to help run the information display at Hamilton Regional Livestock Exchange (HRLX).
He said his work over the last eight years has lent itself to the extra duties which began for him earlier this year.
“I’ve been a detective since 2013 so over the course of the time (I’ve investigated) some of the crimes that relate to farms and rural areas,” he said.
“It was just an automatic progression to take a little more interest in that field and to learn a few more skills.”
Victoria Police has about 70 FCLOs based in stations across the state that specialise in assisting with farm-related crimes alongside their other responsibilities.
The FCCU was created in October 2019 to provide a coordinated response to farm crime across Victoria, including livestock and equipment theft.
FCLOs monitor incidents, crime trends and patterns, develop intelligence and worked with local police to proactively and reactively address farm crime.
Act Sgt McClure said the concept of the FCCU was working well for him when investigating this type of crime.
“It just gives you a few more resources and contacts when similar crimes occur around the state,” he said.
“It’s all about building partnerships and it gives you a few more resources … to solve crime and prevent crime.
“I speak with other areas in the state, we have little catch-ups via computer and we’ve seen that has made a big difference.”
With the roadshow, he was hoping to strike up some fruitful conversations to bolster the unit’s effectiveness even further, including “the importance of reporting crime in a timely manner”.
“It gets the word out to farmers and also businesses involved in the rural area,” Act Sgt McClure said.
“Just gets … more publicity and it gives people the confidence to report crime.”
Act Sgt McClure and other Victoria Police farm crime specialists will be at the display handing out farm security checklists and farm gate signs to help farmers prevent farm crime, encouraging all members of the community to come down and have a yarn about farm crime or just farming in general.
Catch up with them tomorrow, Wednesday November 10, at HRLX from 10am to 2pm.