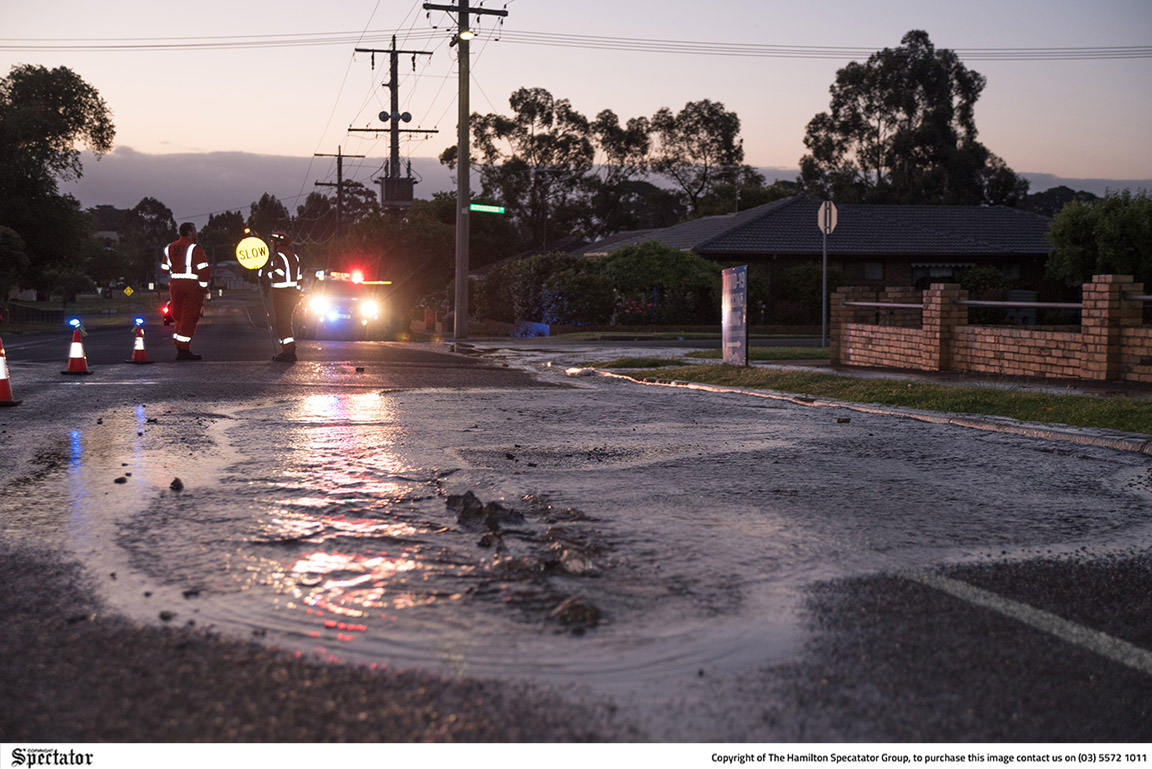 HAMILTON SES Unit members direct traffic at the corner of Tyers and Kitchener Street after a water main burst in the middle of the street on Sunday night. Photo: TASH FRANKO.
By Eliza Sears

A BURST water main in Hamilton at the corner of Tyers and Kitchener Street, caused disruptions on Sunday night.

The Hamilton State Emergency Service (SES) unit was called out to assist with the burst main at 8.15pm and arrived on scene at 8.30pm where police were already directing traffic around the hazard.
The SES unit, consisting of five members and two vehicles, quickly established traffic management points, and took over from police.
The unit diverted traffic around the impacted area until Wannon Water personnel arrived and undertook repairs and remedial works to the impacted area.
SES Hamilton Unit community engagement officer, Bruce Humphries said it was an SES member who raised the alarm.
“One of our members had been passing by and saw it … the water was flowing pretty freely until the mains were turned off,” he said.
“We were fortunate there was minimal traffic at that time of night, so it was pretty quiet.”
Mr Humphries said repairs were still in progress when the Hamilton SES unit departed at 9.30pm, with Wannon Water continuing to manage the repairs, which were mostly isolated to the bike lane.
Wannon Water’s civil maintenance coordinator, Denis Holmes said Wannon Water’s civil maintenance team arrived at the site on Tyers Street just before 9pm.
“We had the water supply restored about three hours later and further clean-up work at the site took place this morning,” he said.
“We’d like to apologise to the small number of residents who were impacted while our team worked hard to get the water back up and running.
“Please remember if you notice a burst main or have an unplanned supply interruption, we’re here for you via our 24-hour hotline - 1300 926 666.”