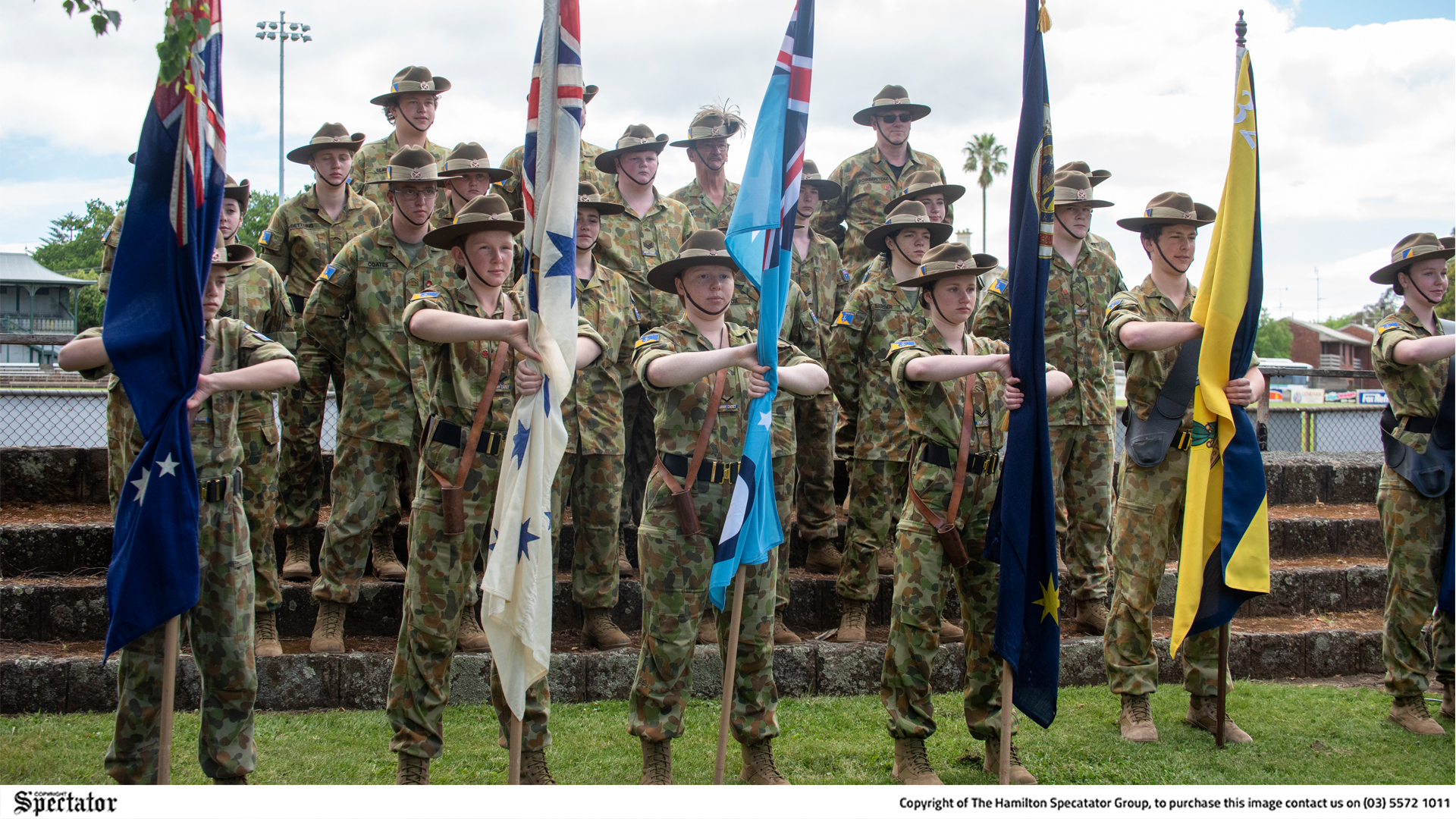 THE local community came together at the Melville Oval Cenotaph on Thursday for Remembrance Day to commemorate all Australian soldiers who paid the ultimate sacrifice for our country. Thousands of poppies were placed in front of the Cenotaph to honour countrymen who were lost in conflict. It was a solid turnout with many community members laying a poppy or a wreath. Photo: BLAIR BURNS.
By Blair Burns

THE local community came together on Thursday for Remembrance Day to reflect on the service and sacrifice of all Australians who have suffered and died in times of war.

Retired Royal Australian Navy (RAN) lieutenant commander, Graeme Mustow was the main speaker for the day and welcomed everyone to the service.
“We gather here today on the 103rd anniversary of the ending of World War I (WWI), we pay our respects to those who went to war and never returned and those who did return, many bearing the physical and mental scars of global conflict,” he said.
“This remembrance commemoration reminds us of the need to build and maintain community spirit in a time of adversity, for us it is the current threat of the coronavirus pandemic.
“Let what’s transpired in the trenches and on the battlefield in the First World War and conflicts ever since, continue to remind us that freedom has its price.”
In the four years of the war from 1914-18, more than 330,000 Australians served overseas, more than 60,000 were killed - with another 152,000 wounded, gassed or taken prisoner.
That dreadful war cast a long shadow for decades and generations to come, there was of course more deep sadness to come, the second world war saw 93,000 Australians serve in the armed forces with more than 27,000 killed and a further 23,000 wounded.
“We recognise the scars of death still resonate with us today, Remembrance Day is also a time for us to reflect on the need to stand tall when tyranny threatens,” Mr Mustow said.
“War in any form is a dreadful thing yet there have been times in the past and regretfully probably in the future when to stand up against tyranny is to stand up for freedom and the democratic society that we enjoy today.”
The Hamilton Pipe Band performed the last post and Hamilton RSL sub-branch president, Paul Shewell recited the ode.
“They shall grow not old, as we that are left grow old; age shall not weary them, nor the years condemn; at the going down of the sun and in the morning, we will remember them.”
Representatives from the RSL, Hamilton Legacy, schools and 315 ACU all placed a wreath at the cenotaph to pay their respects.
Mr Mustow said victory came at a terrible cost and referenced a memoir from General John Monash who was best known for his role as commander of the Australian Army Corps in France in WWI.
“Let it not be assumed that the part that fell to my lot afforded me any satisfaction nor enthusiasm for war, quite the contrary,” it read.
“From the far-off days of 1914 until the last shot was fired, every day was filled with loathing, horror and distress.
“I deplored all the time the loss of precious life and the waste of human effort, nothing could have been more repugnant to me than the realisation of the dreadful inefficiency and misspent energy of war - yet it had to be.
“And the thought uppermost was the earnest prayer that Australia might be forever spared of such horror on her own soil.”
Mr Shewell said he was very happy with the attendance on the day and how everything went.
“It was great … the cadets have done a fantastic job, Baimbridge have done a fantastic job laying these poppies, they look great, they’ve done a few years’ worth and there’s probably going to be more next year,” he said.
“Community wise, it’s good to drag the community out and get them back involved again with what we do and what we stand for.”
Mr Mustow said it was nice to see that a lot of people still remembered the sacrifice that our soldiers in all wars have made to give us our current way of life.
“It’s a commemoration of all the people who went before us,” he said.
“It’s our way of remembering what they did for us and how they’ve protected our way of life.”