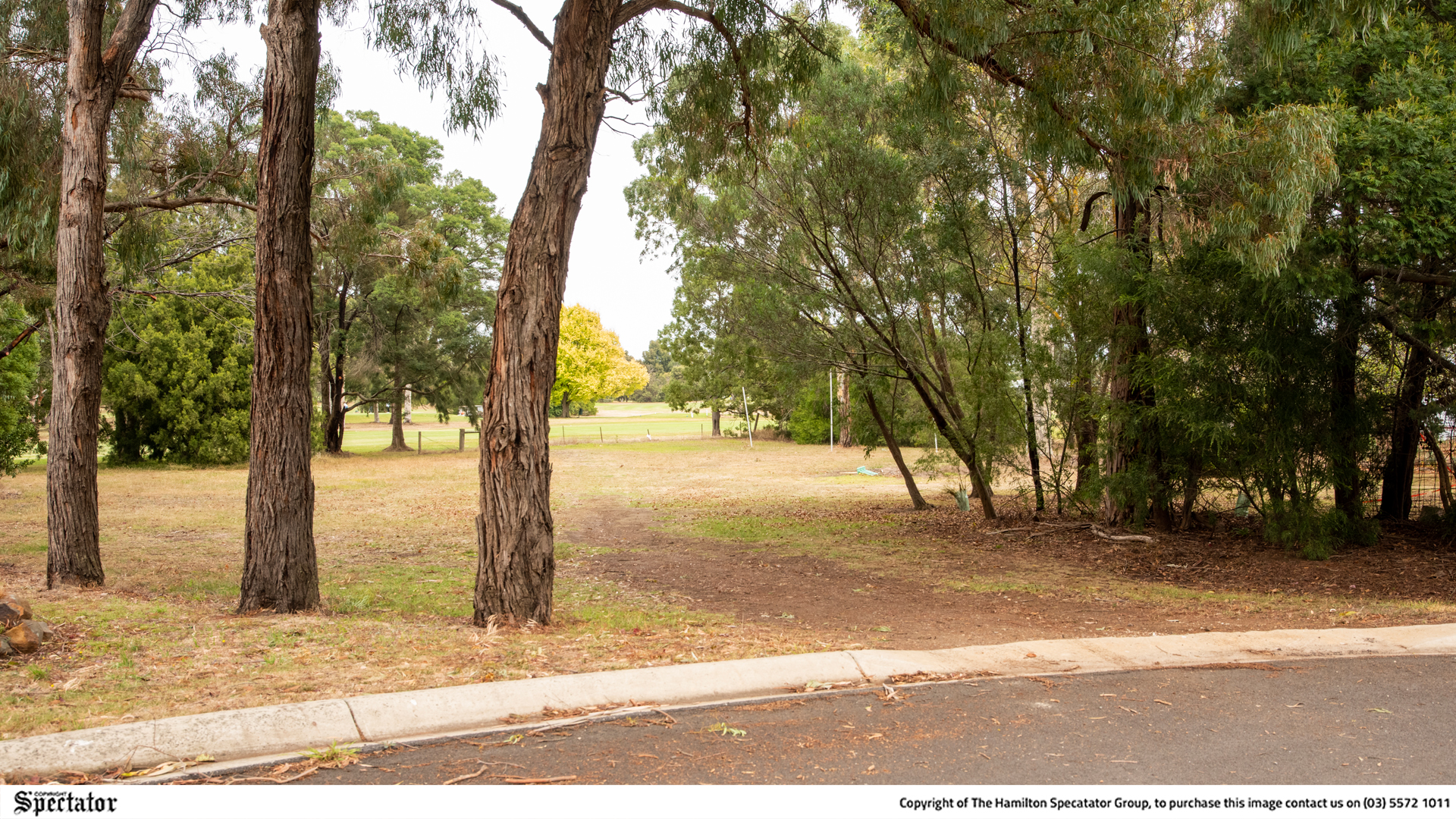 PROVIDING access between Moodie Avenue and the first hole of the Hamilton Golf Club is the vacant block at number 14a; on Wednesday Southern Grampians Shire Council decided to sell the block, despite local residents petitioning for the green space to remain.
By Mark Rabich

THE controversial issue of the vacant block at 14a Moodie Avenue next to Hamilton Golf Club came to a head at Wednesday evening’s Southern Grampians Shire Council meeting with council deciding to sell the land in a six-to-one vote.

Councillor, Albert Calvano was the lone voice who spoke against selling the block and claimed the public wished the land to be kept as a reserve, citing “approximately 60 petitioners, seven … written submissions and a deputation” and calling to “maintain this block of land as usual (and) keep it as a green space … for future generations”.
“Council has maintained this block of land for several years, which we thought we owned,” he said.
“The representatives of the estate decided to donate it to the Southern Grampians Shire Council (SGSC), knowing this fact the council could either keep it and maintain it as usual or sell it for an ongoing market price.
“In my opinion, I think that this block of land should be maintained by the SGSC, making sure that it is safe for the public to use such as managing trees that are a risk to council and public.
“We’ve been doing it – we should keep on doing it.”
The land has been a point of community discussion since the original notice of intent to sell was given in December last year, with ongoing costs – estimated at around $55,000 for the next 10 years – as well as public liability issues cited as major justifications.
Councillor, Helen Henry moved the motion to sell and said, “I appreciate that this is a difficult decision”.
“I’ve thought long and hard about this,” she said.
“As you know, I went and sat at that particular block many times to look at its use; I am not a big fan of selling green space.
“However, the 10-year financial report, the asset management register, all indicate that we must look at our assets and there are some very hard decisions to be made into the future.”
With the “financial surety of our community” at stake, Cr Henry said it was important to act for all of the community.
“We cannot, as a rural community continue to maintain to the expected standard all of our assets,” she said.
“It’s a question of equitability and there are other 16,000 other members of our shire potentially that can benefit from us not having to make have this added expense.”
She particularly took issue with the community not providing an alternative way of keeping the vegetation in check.
“I was of the opinion that to ask for something from your community - because it’s not my block, it’s our community block - that the community that’s going to benefit or the people that are going to benefit need to put something on the table and we ask that they do so in the form of some sort of maintenance,” Cr Henry said.
“That hasn’t been forthcoming. There has been quite a significant period of time, no committee or organised group has come forth to say that they’re willing to contribute to the block either in a workforce capacity or in a financial capacity.
“I did make phone calls to the golf club, but I’m not satisfied that they are particularly committed to the maintenance of this block and nor should they particularly have to take on more land when they have a significant portion of land.
“There are alternative routes to accessing the golf course.”
But some local residents feel the shire has not given adequate time to establish a viable long-term option.
Doug Ward, who lives nearby, said a solution had been in the works with the golf club and the decision was premature.
“We had understood that the best way to handle the situation was for the council to have a memorandum of understanding with an entity, which we negotiated with the golf club to volunteer to be,” he said.
“Before the golf club had a chance to write the letter, the council has decided to sell the land.”
Another nearby resident, Jim King said, “the local community won’t be terribly happy” and the block’s usage “goes back a long way”.
“It’s never been designated as a housing lot,” he said.
“It’s just terribly disappointing.”
Hamilton Golf Club president, Ian Ferguson also said he was disappointed with the decision as the proximity of the first hole to the block would inevitably lead to further expense for them.
“If somebody builds on it, and a few golf balls start going in there, they’re going to say, you’ve either got to build a 450-foot-high fence to stop the golf balls or we’ve got to shift the first tee,” he said.
“It’s happened before on … many golf courses.”
Mr Ferguson said they had been waiting for council to respond after meeting with them and said the council knew they did have a commitment to “looking after it in principle” in line with the wishes of local residents.
“We didn’t want to take over from the people who live in the area and say, righto, our blokes can cut it and do this and do that and do something else,” he said.
“We were just going to help, that was our intention.”
Cr Calvano told The Spectator although he supported the community initiative, he believed any savings to the shire in discontinuing maintenance wasn’t a realistic calculation anyway.
“If you want to save on the costing, what are the workers going to do if you don’t give them the work to mow that park?” he said.
“They’re still going to get paid – doing what? Other jobs? What are the other jobs?”
The Southern Grampians Shire was also contacted for comment but did not respond in time for publication.
The decision authorises the Shire’s interim chief executive, Tony Doyle to execute all the paperwork necessary for the sale; it is hoped to raise approximately $150,000.