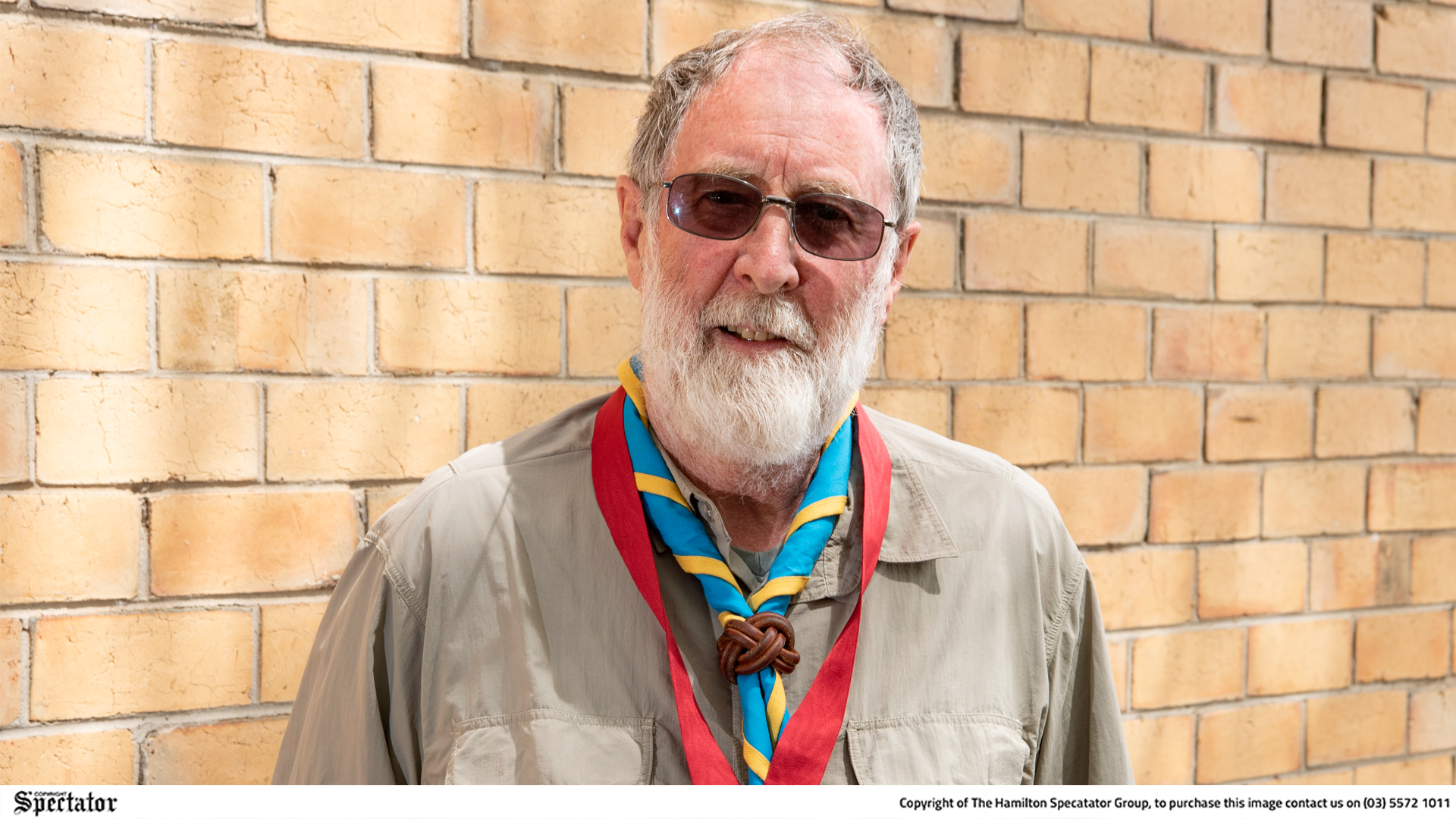 HAMILTON man, Peter Lyon was presented with the ‘National President’s Award’ certificate and medal on November 6 for his 50 years involvement in the Glenelg River District Scout group. Photo: TASH FRANKO.
By Samantha McCombe

The National President’s Award is given for eminent achievement and exceptional service to Scouts Australia by adult members and supporters, over a long period in significant roles, or for a unique and valued contribution to the wellbeing of Scouting.
Mr Lyon chose to have his certificate and medal presented locally by the District Commissioner at the annual Scout awards and presentations day on Saturday, November 6, after the Adult Recognition Awards ceremony scheduled to run in Melbourne on September 12 had to be rescheduled due to COVID-19 restrictions.
Mr Lyon said he was proud to have earnt the award as it reflected the role he has played in the community and shaping younger generations.
“I look back on my career now and several successful businessmen in Hamilton were my Scouts, it makes you think you must’ve done something right,” he said.
“It’s a very honourable position to be in because you’re looking after other people’s kids when they’re an impressionable age, so you have a great hand in how they’re brought up.”
Mr Lyon first joined Scouts as a youth member in 1963 and since then has gone on to be Scout leader, District leader - which he did for 18 years - and chairperson of the District Association, a role he has held for the last 10 years.
“I was a victim of a bring a friend night in 1963 and when my friend left, I was having such a good time that I stayed,” he said.
“I wasn’t into sports; I was just into outdoor pursuits and Scouts was perfect for that.
“I enjoyed being a Scout so much that I decided to stay and lead others through the movement and am still involved today.”
Mr Lyon described himself as a “war horse” within the local Scouting community and said he was disappointed to see less people participating in the organisation in recent years.
“Here in the country Scouts are very low in numbers, going back to the mid 80s, numbers are about half now what they were back then,” he said.
“It would be great for more people to join, it’s a very relevant organisation, I think it’s more relevant these days than ever.”
Mr Lyon has received four awards in the past for his continued Scout involvement and continues to mentor past and current Scout leaders and youth members, who he says are the reason he’s still involved in the organisation.
“If it wasn’t for the support of those around me, I wouldn’t have lasted this long,” he said.
“I didn’t stay in Scouts to get the awards, I did it for the great people around me who keep it running every week.
“There’s a lot of good people in Scouts, they do a fantastic job.”
Mr Lyon also runs the Mallangeeba Scout camp with his wife, Marg, who he says has been “a rock” throughout his Scouting years.
The Mallangeeba Scout camp is located 20 kilometres west of Hamilton and is five acres of semi-bushland that can be used by Scout groups or members of the public for camping and other outdoor activities.